1) Grub Street brings this bit of exciting news: Little Star Pizza’s delicious deep dish pizza will soon be coming to Oakland — specifically to a suddenly-hoppin’ stretch of Grand Avenue that is already home to Boot and Shoe Service, Camino, Destino, and the recently-reviewed Grand Lake Kitchen. The restaurant will replace the recently-shuttered Milano (3425 Grand Ave.) and will be called The Star — as Inside Scoop noted, Little Star co-founders Brian Sadigursky and Jon Guhl have divvied up their expansion plans and aren’t using the trademarked Little Star name for any of their new restaurants. In his interview with Inside Scoop, Guhl, the proprietor of The Star, said the Grand Ave. spot would have slight menu from the original Little Star locations. 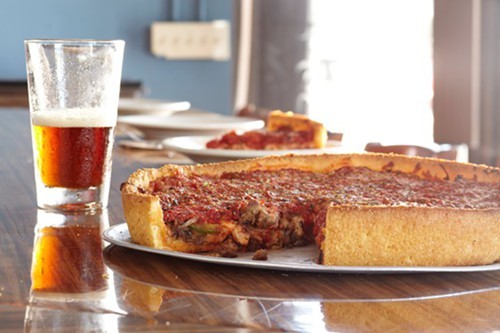 For me, the takeaway is simple: Now I won’t have to trek all the way to Albany for truly excellent deep dish, and takeout becomes a viable option for the first time.


2) According to Tablehopper, self-proclaimed “bohemian fine dining” establishment Loring Cafe (37 Grand Ave.) is open, after an elaborate, months-long build-out. Has anyone been? (No one at the restaurant appears to be answering the phone yet, so as of this posting I wasn’t able to procure menu details or confirm that they are in fact open — neither Facebook nor the restaurant’s website offered any clarity.) In any case, the recent (or imminent) opening comes on the heels of the restaurant’s next-door neighbor, Anfilo Coffee, starting up last week as well, and it’s nice to see some long-empty storefronts on that block getting filled up.

3) A couple of pop-ups of note: East Bay Dish reports that The Cook and Her Farmer, the oyster bar expected to land in Swan’s Market sometime this spring, will be popping up for the next three Fridays at Guerilla Cafe (1620 Shattuck Ave.), from 6 to 10 p.m., cash only. The menu will include both cooked and raw oysters, as well as weekly specials including, this Friday only, crab gumbo (!).

4) The North Berkeley wine and dessert bar Cioccolata di Vino (1801 Shattuck) is doing a bit of rebranding and will reopen this Thursday as Oggi (meaning “today” in Italian), Inside Scoop notes. It doesn’t sound like the concept is going to be so different, but a press release sent out by the restaurant indicated that the menu will change more frequently and that there will be a bigger emphasis on savory small plates. A $12.50 lunch prix-fixe will be another new addition.

5) Berkeleyside Nosh has the story of the Schipani family’s last-ditch effort to work out a deal with the IRS and save their five-decade-old restaurant, Giovanni (2420 Shattuck Ave.). Apparently, the owners owe at least a couple of years’ worth of back taxes.

7) Inside Scoop interviewed Chop Bar co-owner Chris Pastena about his growing Oakland-based restaurant empire. One sound bite: “... I want to let chefs do what they want to do. We’re letting the spaces dictate the concepts, instead of forcing concepts.

8) Here’s a candidate for the worst idea ever: the “Reviewer Card,” a hundred-dollar plastic ID card you can buy if you want to have something to whip out when you act like a d-bag and demand special treatment at a restaurant in exchange for not trashing the place on Yelp.

9) Finally, check out my story on how Richmond’s Rubicon Bakery is an interesting hybrid model for socially conscious businesses.