Perhaps the most enticing part? The place will be open until 1 a.m. every night — although the kitchen will close at 10 p.m., at least during this soft opening period.

2) A new barbecue restaurant is taking over the old Kau Kau Korner (1623 Park St.) spot in Alameda, Berkeleyside Nosh reports. Boyd’s Barbecue will be run by the folks behind nearby Scolari’s Good Eats, whose casual East Coast-inspired fare I am a fan of. They’ve applied for a beer and wine license.

3) The forthcoming, and newly rebranded, Temescal Brewery (formerly known as New Normal Brewing) is gearing up for its grand opening later this spring by attempting to Kickstarter a $30,000 outdoor beer garden area. Check out the snazzy video, and chip in a few bucks if you feel so inclined. 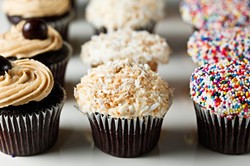 4) In other crowdfunding news, North Oakland standby James and the Giant Cupcake (6326 San Pablo Ave.) seeks to raise $20,000 to help open a second location in downtown Oakland — at 341 17th Street, the corner of Webster and 17th, next door to the newly opened Howden Market.

5) Chop Bar (247 4th St., Oakland) is temporarily closed after suffering a small fire in the early morning hours of Monday, February 29. Fortunately, the damage was relatively minor — limited mostly to restaurant’s ventilation system, according to co-owner Lev Delany. In an email, Delany said he’s hoping Chop Bar will be able to reopen on Tuesday, March 8.

6) A new location of Ike’s Sandwiches has opened in Emeryville, in the retail development at the intersection of Hollis and Powell streets, the E’ville Eye reports. A Berkeley shop is also in the works.

7) Berkeleyside Nosh has the scoop on a new Berkeley coffee shop called Algorithm Coffee (1122 University Ave.), which is now open in the old Cafe Yesterday spot — from the same owner who took over the business in 2014. Apparently, the cafe is doing a bit of reinventing the wheel: Instead of listing lattes, cappuccinos, and so forth on the menu, customers are encouraged to just specify how much milk they’d like added to their espressos. For now, food options are limited to Firebrand pastries, but a more extensive menu will come later on.

8) In honor of Women’s History Month, Nido (444 Oak St., Oakland) is running a new line of $12 cocktails inspired by seven influential Latina women — running the gamut from the Sí, Se Puede (a mezcal-based drink inspired by the activist Dolores Huerta) to the El Otro Lado (inspired by author Isabel Allende). Nido will donate $1 of each cocktail sold to Mujeres Unidas y Activas (MUA), a grassroots organization that works to uplift immigrant Latina women.