Mid-Week Menu: A Coffee Box, a Sicilian Spinoff, and ‘Broffee’

2) As I reported earlier this week, Nellie’s Soulfood Restaurant (1155 3rd St.) will have its last day of business on Thursday, June 30 after some fifty years in West Oakland. In a possible plot twist, Inside Scoop reports that, even at 84 years old, Nellie herself might not be ready to call it quits: She said she’s looking into the possibility of opening in a smaller space nearby. With West Oakland real estate being what it’s been, here’s to hoping she can make it happen if she wants to.

3) The other shoe dropped in another story we’ve been following: Eater reports that Firebrand Artisan Breads (2343 Broadway, Oakland), which parted ways with the (excellent) sandwich pop-up Pal’s Take Away earlier this month, has signed on a fine-dining vet, former Coi chef de cuisine Tommy Schnell, to head up its kitchen. “Craft coffee drinks” — whatever that means — are also in the works.

Meanwhile, the first Pal’s pop-up — a hot dog-themed affair — will take place at Berkeley’s Bartavelle at a yet undisclosed date in July. 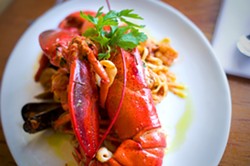 4) Fans of Berkeley’s Trattoria La Siciliana (of whom I am one) will be happy to hear that its owners are plotting a new restaurant called Agrodolce (1730 Shattuck Ave.) at the former Cafe Gratitude spot in North Berkeley. Inside Scoop reports that Agrodolce will have an even stronger Sicilian focus than its sister restaurant. Look for a late-summer opening.

5) The E’ville Eye reports that a new ramen spot called Yuzu Ramen and Broffee is taking over the former Bacano Bakery space at 1298 65th Street in Emeryville. A self-described purveyor of Osaka-inspired, “authentically Japanese, yet on-trend” ramen, the restaurant will feature assorted ramen varieties made with “bone broth” — aka stock — and the titular “broffee,” which apparently is hot bone broth (aka stock) served in a coffee cup with bread on the side.