Fans of the decadent sandwiches and whole-animal ethos at Marrow (325 19th St.), Jon Kosorek’s walk-in closet of a takeout counter in Uptown Oakland, will be pleased to know that the chef-owner is making moves to expand his business to a full-service restaurant. On Marrow’s Facebook page, Kosorek recently announced that he has submitted a letter of intent on a larger space — also in Uptown, he told What the Fork. The new location would allow Marrow to morph into more of a sit-down restaurant, with a full liquor license, servers, a management team, and plated entrées that don’t need to fit within the constraints of a takeout container. 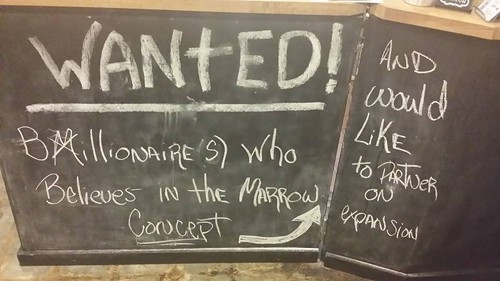 Now comes the hard part: Kosorek said he has ninety days to raise the $250,000 he needs to be able to buy that space (or one of a handful of others he has his eye on). Since it’s such a large sum of money, Kosorek doesn’t anticipate that crowdfunding (which he’s relied on in the past) would be able to make much of a dent. So he’s focusing instead on finding investors who have serious cash to spend.

Long story short, if you’re a millionaire (or billionaire) with a taste for really, really good patty melts, Kosorek needs your help. The chef noted that he and his wife have a baby on the way, and, as he put it, working a hundred hours a week to mostly only sell sandwiches at lunchtime isn’t a sustainable path forward.

“Basically, for Marrow to continue I need to find a larger venue and financial partners to help make that happen,” Kosorek said.