Marijuana Could Lose Its Federal 'Most Dangerous Drug' Status By June 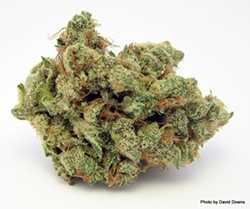 Marijuana could shed its federal designation as one the world’s most dangerous drugs as early as this summer, a new memo has revealed.

Currently marijuana is considered a Schedule I drug, lumped with heroin and cocaine as having no accepted medical use, and a high potential for abuse. The US Drug Enforcement Administration could decide to change marijuana’s status "in the first half of 2016," according to a memo the DEA sent to lawmakers today.

Downgrading pot from Schedule I — where it’s been since 1970 — to a lower level could allow for easier medical research on cannabis. Many close observers of the DEA don't expect the administration to fully de-schedule cannabis, however, because its leadership remains hostile to marijuana. The DEA's chief Chuck Rosenberg called medical marijuana a "joke" in 2015. As a result of his comment, more than 150,000 people have signed a petition to fire Rosenberg.

Still, the memo shows that the DEA is under growing pressure from lawmakers to adjust cannabis’ Schedule I status, which is widely derided by doctors and scientists.

In 2012, former DEA chief Michele Leonhart was grilled on the floor of the US House of Representatives for failing to state whether marijuana was as dangerous or more dangerous than heroin.

According to the DEA's drug scheduling system, prescription opioids are currently safer than marijuana. Marijuana, however, has no lethal overdose amount, while prescription opioid overdoses are a nationwide epidemic. For example, the DEA has an emergency opioid bulletin out right now in Northern California which shows that counterfeit Vicodin (Fentanyl) has killed nine people and hospitalized 42 more.

The pot scheduling memo also shows the DEA is under pressure to end its monopoly over the country’s supply of research marijuana. Reports state just nine researchers per year are able to access the federal research crop — which is a weak and stale strain of marijuana. Uncle Sam’s stash is, at-most, half as potent as California’s store-bought varieties, the memo reveals.

Congress, the US Attorney General or the President could also change cannabis’ scheduling. President Obama has said he’d "probably" sign a de-scheduling bill, but the CARERS Act faces a lame duck Congress which appears unwilling to govern in an election season.