Mama’s Royal Cafe Is for Sale

Attention prospective East Bay restaurant owners: It’s not every day that you have a chance to buy not just a popular dining establishment, but also a piece of Oakland history. That’s the “once-in-a-generation” opportunity that George Marino, the longtime owner of Mama’s Royal Cafe (4012 Broadway), has made available — to anyone who can afford the $395,000 asking price, that is.

With its 42-year history, Mama’s is one of Oakland’s most iconic breakfast spots. A perennial winner of the Express’ Best of the East Bay “Best Brunch” category, the restaurant is as legendary for the length of its weekend lines as for its giant buttermilk pancakes and solid renditions of other American breakfast classics.

When reached by phone, Marino, who is 68, said that business at the restaurant is as good as ever, but that he’s ready to retire so that he can spend more time with his wife.

“The restaurant is a business for younger people, for someone who has more energy than I have,” he said. “I’ve loved it, and now I’m tired.”

Marino helped a few of his friends start Mama’s in 1974. Back then, Oakland’s most popular breakfast spots were all-night diners such as Dave’s Coffee Shop and Biff’s Coffee Shop — places where, according to Marino, the food was mainly notable for being cheap. As Marino tells it, Mama’s was one of the first breakfast spots in Oakland that tried to distinguish itself on the basis of quality rather than price — by using Niman Ranch meats and Acme breads, for instance. 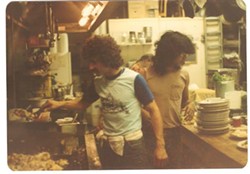 If anything, though, the restaurant is just as well known for its funky decor and its offbeat, community-oriented vibe. Mama’s has long been a haven for punks and hippies and broke art-school kids — one of whom, the illustrator Mimi Pond, even wrote a coming-of-age graphic novel, Over Easy, about her experiences waitressing there during the late Seventies. The dining room’s quirks include a display of old radios, another of vintage aprons, and yet another of “napkin art” — highlights from an annual competition that has become one of the restaurant’s most beloved traditions.

“I always get these people who come in who say, ‘I haven’t been here for twenty years. I’m glad it’s still the same,’” Marino said.

That may help to explain why he doesn’t just want to cash out and sell the restaurant to the highest bidder, though you could hardly blame him if he went that route. Instead, Marino hopes to find a buyer who will keep Mama’s more or less the way it is.

At a time when so many of Oakland’s historic restaurants are closing up shop after forty or fifty or even ninety years of business (see Genova Deli and Nellie’s Soulfood, among other recent examples), this would, of course, be a much gentler way for the restaurant to transition into the next stage of its history.

That’s not to say that Marino doesn’t expect Mama’s to change at all. He expects that whoever buys the place will of course want to put their own stamp on the menu (though all of the current recipes will be included in the sale). And, given the recent restaurant boom around the 40th Street corridor in Temescal, and the corresponding increase in people visiting the neighborhood in the evening, Marino thinks the time is right for the new owners to open Mama’s for dinner service — even if it’s just to serve the restaurant’s regular breakfast-and-lunch menu during dinner hours.

But he does want a buyer who’s interested in maintaining the restaurant’s identity as a breakfast spot and as a community hub for Oakland. So, while Marino says he’s a “motivated seller,” he isn’t in a rush to sell — or rather, he does hope to sell quickly so he can retire, but he also wants to make sure he finds the right buyer. All in all, he expects the entire process might take about a year.

“I’m not interested in selling it to someone that wants to turn it into a pizza place,” Marino said. “I turned down that offer.”

Clarification: George Marino wasn’t one of the founders of the restaurant, but became a partner within the first year. The original partners were George Russell, Carole Page, Spencer Moore, and Julie Moore.