Reports from Michelle Shocked's show on Sunday, March 17 at Yoshi’s San Francisco have surfaced on the Internet and include the folk singer quoted as saying: ”You can go on Twitter and say ‘Michelle Shocked says God hates fags.’” 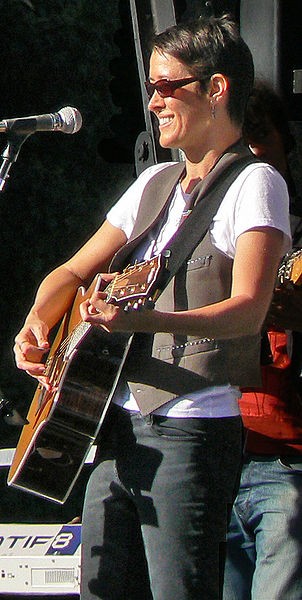 Novato venue Hopmonk Tavern just announced it was cancelling Shocked's March 29 appearance: "Due to comments made by Michelle Shocked at Yoshi’s in San Francisco last night, March 17, we have decided to cancel our show," reads a press release the venue just sent out to media. "Refunds can be made at place of purchase."

The LA-based artist, who claims to have been a "young feminist" on her website and contributed song "Quality of Mercy" to the Dead Man Walking soundtrack in 1995, joined the West Angeles Church of God in the Nineties, according to Queerty. A few folks tweeted from the show last night, including Matt Penfield, who called it full-blown "hate speech."

That was fuck-ing cra-zy! I was tweeting Michelle Shocked's set onstage (for her). All cool. 2nd set, she got up went full hate speech.
— Matt Penfield (@TheGuapo) March 18, 2013

Shocked alluded to the incident with this tweet last night.