The Sogorea Te Land Trust is not affiliated with the struggle over the West Berkeley Shellmound and Village Site, which is being spearheaded by a group founded by LaRose and Gould in the mid-'90s called Indian People Organizing for Change. Each, however, is part of a broader effort to re-imagine what it means to live, work, and build on Ohlone land. And both the land trust and the shellmound campaign have drawn passionate support from hundreds of non-indigenous allies.

Many who have made common cause with the Chochenyo Ohlone struggle view the colonization of land and the genocide of its original inhabitants as fundamental injustices that must be repaired if true justice and lasting environmental protection are to be achieved. The struggle for indigenous cultural renewal has offered a radical and generally inclusive vision for meeting people's material and spiritual needs, which centers on reinvigorating both indigenous and non-indigenous people's relationship to the land itself.

"The taking of the land — the heart of the people — has been the cause of a lot of problems," said LaRose, who is Shoshone Bannock of the northern Great Basin and moved to the Bay Area as a young adult, raising her family here. "I believe that with the land trust, and with a renewed relationship to the land itself, I think that's really going to help us to find our way back."

"The taking of the land—the heart of the people—has been the cause of a lot of problems," said LaRose. "I believe that with the land trust, and with a renewed relationship to the land itself, I think that's really going to help us to find our way back." tweet this

In the mid 1700s, Ohlone people lived in a world of dizzying abundance. In the East Bay, there were vast marshes and lush meadows, wild salmon that swam up the creeks veining the hills to spawn and die, and grizzly bears that inhabited endless oak forests. Partly owing to the temperate climate and easy access to food sources, approximately one-third of all Native Americans in the United States were living in the area now known as California prior to contact with Europeans. In an area spanning from San Francisco to Big Sur, there were 50 documented villages and extended family groups who spoke at least eight distinct dialects and were loosely united by a similar language, often referred to as "Costanoan" but now more commonly known as "Ohlone."

The arrival of Euro-American soldiers and missionaries, who commodified these lands by gridding and platting them with farms and ranches, marked the beginning of a period of gut-wrenching violence, dislocation, and erasure. Tens of thousands of indigenous people in coastal areas were brought to Catholic missions (that were essentially concentration camps), where they were beaten, whipped, burned, maimed, tortured, and killed. Within the missions, many of the so-called religious "converts" continued to worship their deities surreptitiously as well as conduct native dances and rituals in secret, and in some cases became fugitives who allied with the indigenous people of the state's interior to fight back in armed uprisings.

Under the laws of the new state, native people were denied rights such as the ability to vote or testify in court. Many indigenous people became migrant farmworkers. Others, including Ohlone people, survived by hiding out and concealing their identities. Corrina Gould said her relatives survived by hiding out at a Pleasanton ranch and pretending to be Mexican.

Part of what enabled indigenous people to survive was the depth of their spiritual connection to their homeland, notes Chochenyo Ohlone Berkeley resident Vince Medina.

"An intense and undeniable love for homeland is among the reasons our identity was able to survive in the East Bay," Medina wrote in a 2017 letter to the Berkeley Zoning Adjustments Board concerning the proposed 1900 Fourth St. development, on behalf of 19 other Chochenyo Ohlone individuals. "In this very small geographic space, every moment in our Chochenyo Ohlone history has occurred; in this place our very world began on the peak of tuuštak (Mt. Diablo) during the Great Flood that covered the whole of the world." 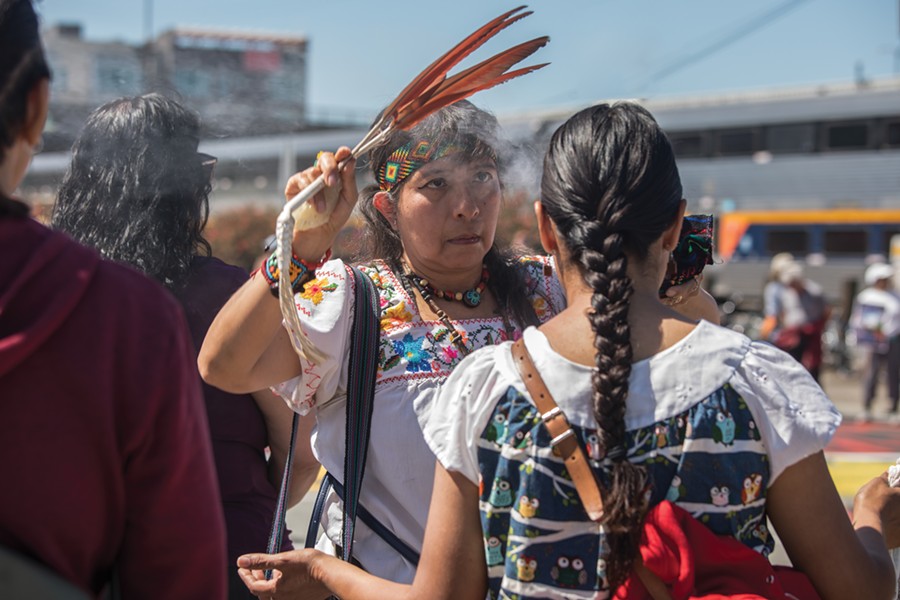 Ohlone people have continuously fought to protect their cultural connection to that homeland whenever circumstances have allowed. The late-1960s brought a nationwide resurgence of indigenous cultural pride, including in 1969, when "Indians of All Tribes" initiated a nearly 19-month occupation of Alcatraz Island to demand that the U.S. honor its treaties with indigenous nations. During this period of increased indigenous political struggle, Ohlone people made several stands to protect sacred places. In a little-known 1975 stand-off in Watsonville, Calif., for example, dozens of indigenous people established an armed fortification within a partially bulldozed Ohlone cemetery where a warehouse was to be built, and successfully negotiated to preserve the half that had not yet been destroyed.

Much of Johnella LaRose's early cultural and political education was also rooted in the Red Power movement of the 1970s. In the late-1970s, she was living at the now-defunct American Indian Movement Freedom and Survival School in Oakland when she became involved in organizing for the Longest Walk, a spiritual walk across the country to rally opposition to numerous pieces of anti-Indian legislation in Congress.