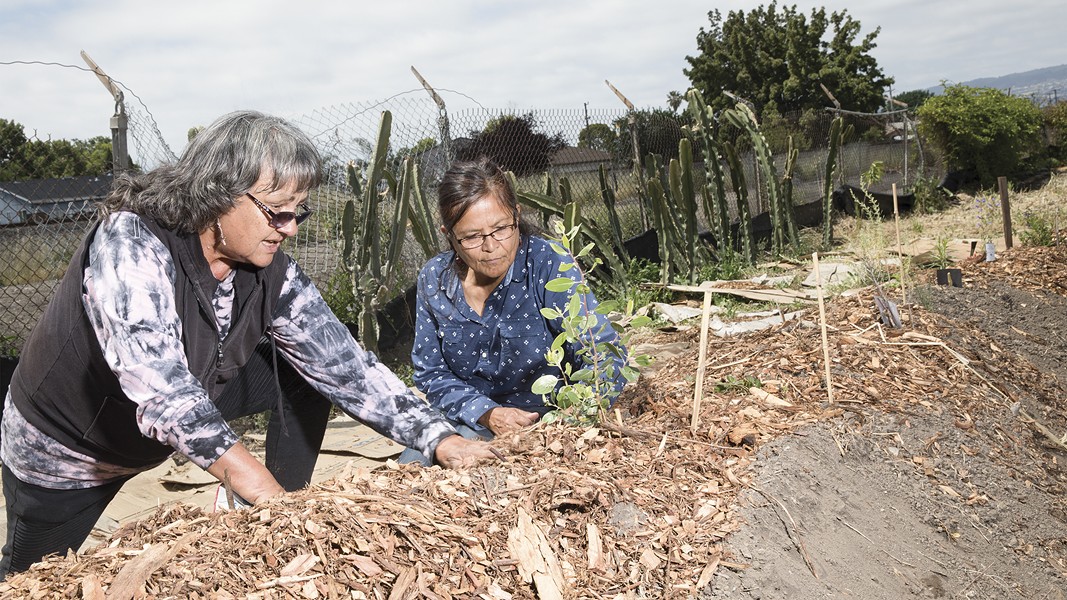 At the back end of a two-acre nursery lot in Oakland's Sobrante Park neighborhood, where 105th Avenue dead-ends into Highway 880 and Lisjan Creek (otherwise known as San Lorenzo Creek) twists north on its path to the Bay, Corrina Gould and Johnella LaRose stand alongside a collection of twigs arranged in a small circle: a miniature rendering of a traditional Ohlone dance arbor. Elsewhere on the property, workers coax tender fruit trees into pots filled with organic soil. Only a year ago, this space was covered with trash and debris piles. But to Gould and LaRose, it's become an incredibly significant patch of earth.

"This gives us a place to call our own," said Gould, an indigenous Chochenyo/Karkin Ohlone who lives in Oakland. "That's something that's hard to come by for a lot of people in this world, especially for indigenous people who have had everything taken away."

As with nearly the entirety of the East Bay, this fringe of land in deep East Oakland has been part of the ancestral homeland of the Chochenyo-speaking Ohlone people for several thousand years. Starting in the late-1760s, Spanish missionaries and soldiers attempted to erase California indigenous people's identities by forcing them into filthy, disease-ridden labor camps at missions from San Diego to Sonoma and baptizing them in the Catholic faith. In the late-1840s, U.S. soldiers and vigilantes arrived like a steamroller to these lands, virtually exterminating numerous indigenous nations and forcing others into hiding or on long marches at gun-point to far-flung reservations.

Until now, the descendants of the Chochenyo Ohlone people who survived were left without a secure place on which to practice many of their ceremonies and traditions. Because they aren't federally recognized tribes, contemporary Ohlone communities have no reservations or protected land base.

But last year, the nonprofit food sovereignty group Planting Justice established a first-of-its-kind partnership with the Sogorea Te Land Trust, an urban indigenous, women-led land trust founded by Gould and LaRose in 2015. Planting Justice is paying off $600,000 on a loan to acquire the rectangular parcel on 105th Avenue, which features rows of potted fruit trees ringed by sheds and greenhouses. Currently, Planting Justice provides Sogorea Te with a cultural easement on the property's northern quarter-acre, allowing it to hold ceremonies and for other cultural uses, but after paying off the loan, Planting Justice will deed the entire parcel to the land trust.

The agreement with Planting Justice is a first step in a far more ambitious effort to repatriate East Bay land to Ohlone people. The Sogorea Te Land Trust intends to acquire dozens or even hundreds of parcels in a patchwork throughout the East Bay, partly using funds generated by the "Shummi Land Tax" — a voluntary way for non-indigenous Bay Area residents to acknowledge the theft of Ohlone land and work toward its healing.

These lands will serve as focal points for the revival of Chochenyo Ohlone cultural traditions and their language. They could also enable local indigenous people to re-inter thousands of their ancestors currently piled on shelves at UC Berkeley and in museums across the Bay Area, Gould said. And the land trust will be a vehicle to protect indigenous sacred sites.

In the last two years, Chochenyo Ohlone people and their supporters have been locked in a campaign to protect a portion of one of the oldest sites of human habitation and an important Ohlone ceremonial place along San Francisco Bay. Located where Strawberry Creek meets the saltwater near what is now the Berkeley Marina, the West Berkeley Shellmound and Village Site is estimated to be roughly 5,700 years old, according to radiocarbon dating. The sacred mound, a pyramid of shell and earth, was roughly 30 feet high and covered the area of about two or three football fields. Indigenous people lived there for several millennia.

In 2002, the Berkeley Landmarks Preservation Commission designated a two-block area of the shellmound and village site that stretches from Hearst Avenue to University Avenue and from Fourth Street to Second Street as a city landmark, eligible for listing on the National Registry of Historic Places.

Currently, only one portion of the site remains as undeveloped — a 2.2-acre parking lot located on the southwestern portion of Berkeley's Fourth Street shopping district. In what has become one of Berkeley's most heated development battles in recent memory, a proposed housing and retail development there would involve digging to depths of eight to ten feet across the property. (The ground beneath the parking lot has never been extensively excavated.) Ohlone people have stood firm against any effort to develop the site, and they have called attention to the possibility that their ancestors' remains will be disturbed by the excavation. They have instead proposed a memorial park honoring their history and culture to the present.

In March, the developer, West Berkeley Investors, a subsidiary of Danville-based Blake|Griggs Properties, raised the stakes in the fight by becoming the first company in California to invoke a new state law, Senate Bill 35, that streamlines the approval process of building projects that provide certain levels of housing designated as affordable. In a thorough re-design of the company's original proposal, it is proposing to construct 260 apartment units, half of which would be set aside for households earning 80 percent of the area median income — $80,400 for a family of four.

SB 35 requires that eligible projects be approved within 180 days of its new permit application, which West Berkeley Investors submitted on March 8. Berkeley officials are still reviewing the proposal. Berkeley Planning and Development Director Timothy Burroughs is set to announce whether it is eligible for fast-track approval by June 5, according to Berkeley spokesperson Matthai Chakko.