Over the weekend, experimentalist Tarek Atoui bore into listeners' skulls at Meyer Sound. 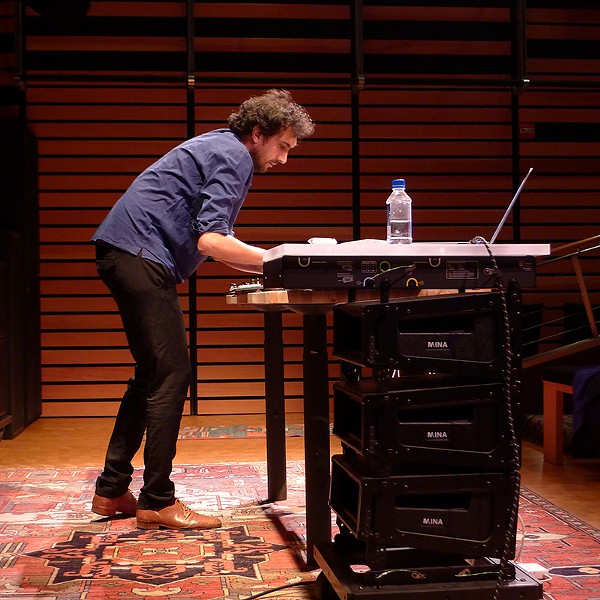 Tarek Atoui, a Lebanese-born artist educated in France, is an electronic musician who's more often dubbed a "sound artist." The boundary is porous, but Atoui aligns more with the sound artist camp in part because he'd rather distribute ideas and methods than recordings. As part of a Berkeley Art Museum residency, Atoui has been working with students on campus to develop new instruments and experimental sound practices. His visit will culminate in exhibitions and performances this fall. On Friday evening, however, Atoui performed two pieces for a small audience inside the headquarters of Meyer Sound.

Venues fitted with Meyer Sound gear typically boast about it. A revered speaker and audio engineering enterprise founded by John and Helen Meyer, the company's intimate on-site theater is a suitably rarefied space. Wood-paneled walls flank an audience limited to around thirty, as do dozens of speakers in various sizes, all affixed to a black scaffolding system. To hear any sound demonstration in the room would be a treat; witnessing Atoui have his way with the unparalleled setup felt like a tremendous privilege.

Tall, wild-eyed, and an emphatic speaker, Atoui stood before a table featuring a hardware interface of his design. Fitted with knobs, faders, pressure-sensitive pads, and infrared scanners, the physical sensors enabled Atoui to control sounds sourced at random from categories on his computer. Other sets of digital conditions determined how the sound moved between the rooms' various speakers and at what rate.

Including a spatial component in experimental music isn't anything new, but Atoui's first piece — for which he manipulated field recordings taken by other artists, as part of a commissioned piece for the inauguration of the Frank Gehry-designed Louis Vuitton Foundation — exploited Meyer Sound room's immersive potential to consummate effect. The sounds seemed not only approach the ears from varying directions (and with astounding definition), but to also nestle inside the skull, duping the mind into thinking they'd actually been there forever, just imperceptibly.

Beyond enabling Atoui to manipulate and deploy sound in novel and thrilling ways, the setup allowed him to be remarkably performative. For his second piece, which involved more improvisation and fleeting samples, Atoui made great use of the infrared scanners. It looked like he was pantomiming desired effects. He made frantic scooping motions, appearing at times like a mad shadow-puppeteer, and forcefully jabbed the pressure-sensitive pads violently while moving faders with his teeth.

Afterward, Atoui said that he had no practice in the room, and suspected t hat he'd only begin to tap the sound system's potential. Still, when he deliberately pushed the speakers, tickling the audience's threshold for pain in the process, his inquisitive attitude was obvious. At one point, he placed both hands on a sole fader, stared at it intently, and marshaled a very low rumble to precisely the intensity needed to rattle the wood paneling.

The sounds were alternately cacophonous, high-pitched, alien, deep, dulcet, and sometimes surprisingly familiar, but it was the sort of singular thing that moves listeners to invoke the language of different senses. Indeed, in a brief question-and-ans wer session afterward, Atoui repeatedly referred to sounds as "events" and manipulation as "intervention," which ascribed his work with a deserved sense of narrative, drama, imagery, and action. Another audience member asked Atoui to elaborate on why he used the word "conjugation" in regard to sound. Atoui, somewhat bashfully, said something about a consequence of translation. Still, it's an intriguing idea.