At Oracle Arena last night, the self-proclaimed God Yeezus, otherwise known as Kanye West, put on a bold, highly orchestrated spectacle that was ripe with symbolism. In other words, it was nothing less than we’ve come to expect from him.

Yeezus, the album he released earlier this summer, is heavy, dark, and bleak, and so was the Yeezus tour. For most of the night, West was faceless, strutting and rolling around on stage shrouded in masks that eerily obscured his face. With the exception of his bright-red shoes and a particularly glittery mask he donned during the final quarter of his performance, the set was awash with grays and nude tones. A massive, stark, pale-gray mountain rose from the back of the stage. A circular screen behind him displayed black-and-white images of passing clouds; later in the night, the clouds were replaced with the night sky and stars. Several times throughout the two-hour performance, a black screen flashed with the definition of a verb written in white (the first was “Fighting: Light beamed into the world, but men and women ran towards the darkness”) — the concept, much like Yeezus, was cold, odd, and difficult to engage with. 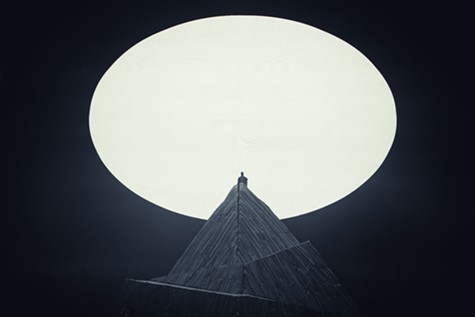 The Yeezus tour also made heavy use of religious imagery, which was at times hilariously shocking in its explicitness. At one point a white actor dressed as Jesus greeted West on stage before he launched into a spirited performance of “Jesus Walks” — “White Jesus, is that you?” West asked the actor. The actor then slowly made his way to sit atop the mountain. Young women, who were dressed in nude-colored full-body stockings, which also covered their face, and sported long, dark hair (looking vaguely vaginal), stood behind West from time to time, appearing disciple-like in their homogeneity and lack of expression. The extensive use of religious imagery lent an even further air of gravity to the show. Was writing Yeezus a transcendent experience for West? Is watching him perform it supposed to be transcendent for us? It wasn’t, but it was obvious how seriously West takes the sentiments he expressed in Yeezus (despite laughable, attention-getting lines like Eatin’ Asian pussy all I need was sweet-and-sour sauce).

I don’t think Yeezus was a tour de force, as many other music journalists believed: I found most songs abrasive and some nearly unlistenable (yeah, I get it: That’s the point). Unless you already knew the lyrics to “New Slaves,” “I Am a God,” and other Yeezus tracks, it was impossible to make out what West was rapping about, although that didn’t appear to prevent the crowd from being fully engaged in his performance. While I enjoyed hearing him growl, “Hurry up with my damn croissants!” I thought the highlights of the night were when he performed older material, like the orchestral “All of the Lights” and the fierce “Can’t Tell Me Nothing.” Given his recent engagement to Kim Kardashian and the birth of his daughter, North West, it’s difficult to rectify the isolation and painful loneliness of Yeezus with the joy it seems reasonable to assume he feels for his new family. But in the lengthy interviews he’s given lately, West has said that Yeezus was inspired by the anger he felt at being denied respect by and entry into the fashion industry.

In an interview with the San Francisco radio station 99.7 NOW on Monday, West declared, “A lot of people have an opinion, but I’ve been building a perspective.” That statement accurately sums up the value of seeing West live — whether or not you like his music or him as a person is irrelevant. West is unafraid to articulate his voice and vision: He’s an artist, and a particularly excellent performance artist. And lately, if the festival circuit is any indication, most popular music seems to simply strive to be pleasurable, easy to dance to, or put on in the background. Yeezus, the man and the album, is a pop star who is definitely not that.

* BTW, Kendrick Lamar, whose album good kid, m.A.A.d city was easily the best rap record last year, opened the show. He sounded polished, but his band was too loud: His amazing, slithering rhythm and rhymes were drowned out.