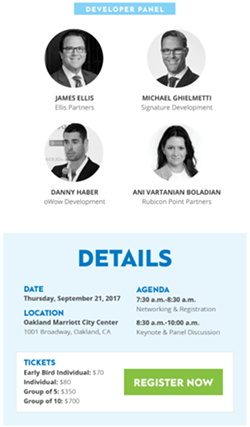 After Oakland Mayor Libby Schaaf quietly expressed her concerns to the organizers of a real estate industry conference scheduled for Thursday, the organizers removed a controversial developer from a panel of speakers.

The conference, branded as "Oakland Rising," is sponsored by The Registry, a real estate industry news magazine. Schaaf is providing the keynote address. The mayor was to be followed by a panel of four industry insiders, including Danny Haber, the founder of The Negev, Owow, and several other companies active in Oakland and San Francisco.

Some tenants and attorneys contend that Haber is responsible for displacing renters from Oakland's Hotel Travelers, and that he took advantage of renters at the former 1919 Market Street warehouse, which was demolished last year following its red-tagging by city inspectors. Haber is currently being sued by some former tenants of both buildings who allege that he and his team harassed them in a concerted campaign to remove them.

"The mayor is aware of citations, complaints, and a lawsuit filed against Haber [regarding] properties he’s engaged in developing," Schaaf's spokesperson Justin Berton explained in an email. "The mayor was concerned about the seriousness of the allegations against Haber and shared them with the organizers. The organizer decided to remove Haber from the panel."

The Registry did not return requests for comment for this report.

The mayor's move followed a flurry of emails and phone calls from tenant activists.

"You've made a big show of being anti-displacement in the wake of Ghost Ship, and Haber is the undisputed leader in live/work tenant displacement," wrote Jonah Strauss of the Oakland Warehouse Coalition in an email to Schaaf.

Strauss also wrote that "Oakland Rising" also happens to be the name of a well-known Oakland nonprofit and that the conference organizers use of the name could be confusing for Oakland residents.

"They’re co-opting with our name with an agenda of everything we stand against," said Jessamyn Sabbag, executive director of Oakland Rising. "When they talk about Oakland rising, they’re talking about rising profits. We’re talking about working class communities of color trying to defend Oakland against big developers."

Haber and his defenders contend that he's being demonized unfairly and that the displacement of tenants at the Travelers and 1919 Market was due more to the past decisions of former landlords and the city.

Edward Higginbotham, an attorney who represents some of the former tenants of 1919 Market wrote a letter to Oakland Deputy City Attorney Erin Bernstein in June defending Haber (see below). He described the 1919 Market Street warehouse as unsafe and wrote that its former owner and manager, Seth Jacobsen and Madison Park Financial, "reaped the benefits of packing in as many tenants into the warehouse as possible."

Later, after Haber became the manager of the property, the city red tagged the building, forcing everyone out. Haber purchased the building and eventually demolished it.

"Throughout this process, the only helpful individual(s), were Danny Haber and his team," wrote Higginbotham.

But other attorneys say Haber's actions have caused displacement in Oakland.

"Haber’s business model is based on displacing long-term Oakland residents and replacing them with young newcomers to the area," said Laura Lane, an attorney with the East Bay Community Law Center. "He is explicit, intentional, and unapologetic about this modus operandi."