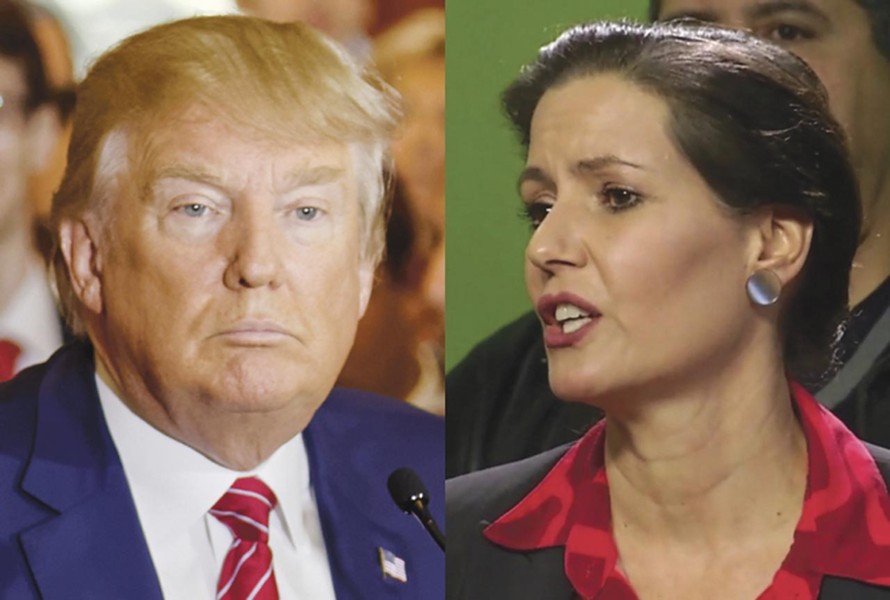 Oakland Mayor Libby Schaaf tossed out the first pitch at Monday's night A's game with a looping strike. A half-inning later, Schaaf threw a brush back pitch at President Trump, implying in a tweet, that she would blow the whistle again on any U.S. Immigration and Customs Enforcement raids, if any are planned for Northern California.

Trump tweeted Monday night that the agency would begin next week "removing the millions of illegal aliens who have illicitly found their way into the United States." Based on interviews with agency officials, it is not clear whether the president's vow is actually planned or aspirational.

More than an hour later, Schaaf implied she would warn undocumented immigrants of an ICE raid, if she receives credible information of any impending actions, she tweeted at the president.

"@RealDonaldTrump If you continue to threaten, target and terrorize families in my community ... and if we receive credible information ... you already know what our values are in Oakland — and we will unapologetically stand up for those values."

Thomas Homan, the then-acting head of the agency, equated Schaaf with a "gang lookout" and Trump asked his U.S. Attorney General at the time, Jeff Sessions, to prosecute Schaaf for obstruction of justice. "The Libby Schaaf Act of 2018″ was later introduced by Rep. Steve King to threaten jail time for officials disclose ICE raids to the public. But the mayor's warning played well among her Oakland constituents.

Scott Haggerty Will Not Seek Reelection

Alameda County Supervisor Scott Haggerty, who has served portions of the Tri-Valley and Fremont since 1996, announced that he will not seek re-election to his Board of Supervisors District 1 seat.

Haggerty's legacy as a supervisor will likely be cast around his work in transportation and taking part in an era of financial stability at the county level. In the midst of a changing economy and one of the most debilitating recessions in U.S. history, the county maintained reserves and never cut a single county job despite record annual deficits. Haggerty also worked tirelessly to alleviate constant traffic congestion on Interstate 580 and pushed for the completion of the Warm Springs BART station in Fremont, while advocating for BART to Livermore. He also voiced strong support for the Alameda County Sheriff's Department.

The sudden announcement is certain to shake-up the East Bay's political landscape. An open seat on the Alameda County Board of Supervisors is rarely in play and attractive for aspiring candidates because of its steady pay and stability. The seats have no term limits, and no member of the board has lost a re-election campaign in generations.

Prospective candidates interested in Haggerty's seat do not have much time to contemplate a campaign for the open seat. The primary for this race is Mar. 3, 2020.

On the same day long-time Alameda County Supervisor Scott Haggerty announced he will not seek re-election for a sixth term, state Sen. Bob Wieckowski said he will run to replace him next year in the District 1 seat.

Harris and Swalwell to Debate Biden, Sanders, and Others

Two Democratic presidential candidates with ties to the East Bay will join the second night of two much-anticipated debates on June 27-28. Sen. Kamala Harris and Rep. Eric Swalwell will be featured together in the debate on Thursday, June 28.

The second debate is seen as the more glamorous of the two since it includes four of the five candidates routinely topping the polls. Former vice-president Joe Biden, Sen. Bernie Sanders, Pete Buttigieg, and Harris head the marquee in Miami for the Thursday night debate on MSNBC.

For Swalwell, who has struggled to make much of an impact since officially joining the race on April 8, the larger spotlight afforded by the debate could either overshadow him or give him an opportunity to seize the greater attention provided by the field's top contenders.

By contrast, Wednesday night's field of Democratic presidential candidates has significantly less star-power, although, led by Sen. Elizabeth Warren, who is believed to be surging in the polls recently, along with Sen. Cory Booker, and Beto O'Rourke.

San Leandro's cannabis industry has failed to gain a foothold nearly four years after the city approved its first medical cannabis dispensary. The first dispensary to open, actually the third permit given by the city, only opened earlier this year. Three years ago, voters gave the city permission to begin taxing cannabis sales and a schedule was approved by the City Council setting the rate six percent, starting last year and due to increase to seven percent on July 1.

But without much activity on the sales front, the San Leandro City Council turned back the clock on the tax schedule. San Leandro's tax schedule was set to plateau at 8 percent in the third year. Under the proposal approved by the council Monday night, the city will hit the eight percent tax rate in July 2022, instead of 2021.

The move comes at a time when other cities across the state have faced growing concern from the cannabis industry that their business is being overtaxed.

Kaiser Permanente, Oakland's largest employer, wants to transform disparate lots on Telegraph Avenue near BART into one of the biggest buildings in the Bay Area, the San Francisco Chronicle reported. The new building would serve as Kaiser's headquarters, house 7,200 employees, and cost $900 million. ... The City of Berkeley sued U.C. Berkeley last Friday alleging the university failed to appropriately assess the impact on city services of an influx of new students by 2022-23, Berkeleyside reported. ... A motorist traveling westbound on Highway 24 was shot while driving through the Caldecott Tunnel, Bay City News reported. ... East Bay Municipal Utilities District customers will see their water bills increase by 12.75 percent over the next 2 years, BCN reported. ... Max Harris, one of the Ghost Ship defendants, testified that he was not an authority figure at the Ghost Ship, just someone who received free rent for cleaning the warehouse collective, KQED reported. ...

The California Democratic Party is considering letting non-citizens vote on party matters, Capital Public Radio reported. ... Bombadier, the Canadian company creating BART's new rail cars, is opening a plant in Pittsburg, the Chron reported. This means much of BART new fleet will be assembled in the East Bay. Meanwhile, BART is phasing out paper tickets by the end of this year. ... Anthony Gomez, 56, was fatally shot by San Leandro Police last week after mistaking a piece of wood in Gomez's hand for a firearm. Gomez's mother disputes that he was wielding a machete beforehand and exposing himself to children before the shooting, the Chron reported. ...

The Toronto Raptors closed out the last game at Oracle Arena by winning the NBA championship in Oakland. Meanwhile, the architect of the Raptors rise to glory, team president Masai Ujiri was charged with misdemeanor battery against an Alameda County sheriff's deputy following the game's conclusion. ... Cal women's head basketball coach Lindsay Gottlieb was hired by the NBA's Cleveland Cavaliers. ... The Raiders will be the subject of Hard Knocks, the HBO reality series chronicling the pre-season highs and lows of an NFL team. 