Letters to the Future

Scientists, authors, and activists predict the outcome of the upcoming UN Climate Talks in Paris.

Illustration by Don Button, DesignButton.com.
To read more letters or to write a letter of your own, please visit LettersToTheFuture.org. This is a collaborative effort between this newspaper, the Association of Alternative Newsmedia, and the Media Consortium. You can also like us on Facebook at Facebook.com/LettersToTheFuture.ParisClimateProject.

World leaders from more than 190 countries will convene in Paris during the first two weeks of December for the long-awaited United Nations Climate Change Conference. Will the governments of the world finally pass a binding global treaty aimed at reducing the most dangerous impacts of global warming or will they fail in this task?

Letters to the Future, a national project involving more than forty alternative weeklies across the United States, set out to find authors, artists, scientists, and others willing to get creative and draft letters to future generations of their own families, predicting the success or failure of the Paris talks — and what came after.

Some participants were optimistic about what is to come — some not so much. We hereby present some of their visions of the future. 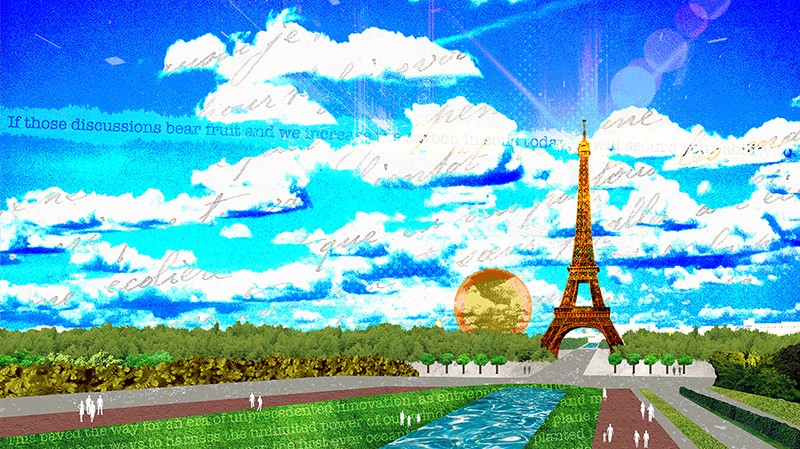 Back around the turn of the century, flying to space was a rare human privilege, a dream come true, the stuff of movies (look it up), and an almost impossible ambition for children the world around.

But I was one of those fortunates. And what I saw from the cold, thick, protective windows of the Space Shuttle is something that, despite my forty years of dreaming (I was never a young astronaut), I never remotely imagined.

Not that I was new to imagining things. As you may know, I was somehow born with a passion for the sky, for flight, and for the mysteries of the atmosphere. I built and flew death-defying gliders, learned to fly properly, earned university degrees in the science of flight, and then spent the rest of my life exploring Earth's atmosphere from below it, within it, and above it. My hunger was never satisfied, and my love of flight never waned at all, even though it tried to kill me many times.

As I learned to fly in gliders, then small aircraft, then military jets, I always had the secure feeling that the atmosphere was the infinite "long delirious burning blue" of Magee's poem, even though of all people, I well knew about space and its nearness. It seemed impossible to believe that with just a little more power and a little more bravery, I couldn't continue to climb higher and higher on "laughter-silvered wings." My life was a celebration of the infinite gift of sky, atmosphere, and flight.

But what I saw in the first minutes of entering space, following that violent, life-changing rocket-ride, shocked me.

If you look at Earth's atmosphere from orbit, you can see it "on edge" — gazing towards the horizon, with the black of space above and the gentle curve of the yes-it's-round planet below. And what you see is the most exquisite, luminous, delicate glow of a layered azure haze holding the Earth like an ethereal eggshell. "That's it?!" I thought. The entire sky — MY endless sky — was only a paper-thin, blue wrapping of the planet, and looking as tentative as frost.

And this is the truth. Our Earth's atmosphere is fragile and shockingly tiny — maybe 4 percent of the planet's volume. Of all the life we know about, only one species has the responsibility to protect that precious blue planet-wrap. I hope we did, and I hope you do.

After 36 years as an astronaut — with a tenure that included four shuttle missions and three spacewalks — Robinson retired from NASA in 2012. He is now a professor of mechanical and aerospace engineering at UC Davis.

Do you remember your grandmother Veronica? I am writing to you on the very day that your grandmother Veronica turned seven months old — she is my first grandchild, and she is your grandmother. That is how quickly time passes and people are born, grow up, and pass on. When I was your age — now 20 (Veronica was my age, 65, when you were born), I did not realize how brief our opportunities are to change the direction of the world we live in. The world you live in grew out of the world I live in, and I want to tell you a little bit about the major difficulties of my world and how they have affected your world.

On the day I am writing this letter, the speaker of the House of Representatives quit his job because his party — called "the Republicans," refused absolutely to work with or compromise with the other party, now defunct, called "the Democrats." The refusal of the Republicans to work with the Democrats was what led to the government collapse in 2025, and the breakup of what to you is the Former United States. The states that refused to acknowledge climate change or, indeed, science, became the Republic of America, and the other states became West America and East America. I lived in West America. You probably live in East America, because West America became unlivable owing to climate change in 2050.

That the world was getting hotter and drier, that weather was getting more chaotic, and that humans were getting too numerous for the ecosystem to support was evident to most Americans by the time I was 45, the age your mother is now. At first, it did seem as though all Americans were willing to do something about it, but then the oil companies (with names like Exxon and Mobil and Shell) realized that their profits were at risk, and they dug in their heels. They underwrote all sorts of government corruption in order to deny climate change and transfer as much carbon dioxide out of the ground and into the air as they could. The worse the weather and the climate became the more they refused to budge, and Americans, but also the citizens of other countries, kept using coal, diesel fuel, and gasoline. Transportation was the hardest thing to give up, much harder than giving up the future, and so we did not give it up, and so there you are, stuck in the slender strip of East America that is overpopulated, but livable. I am sure you are a vegan, because there is no room for cattle, hogs, or chickens, which Americans used to eat.