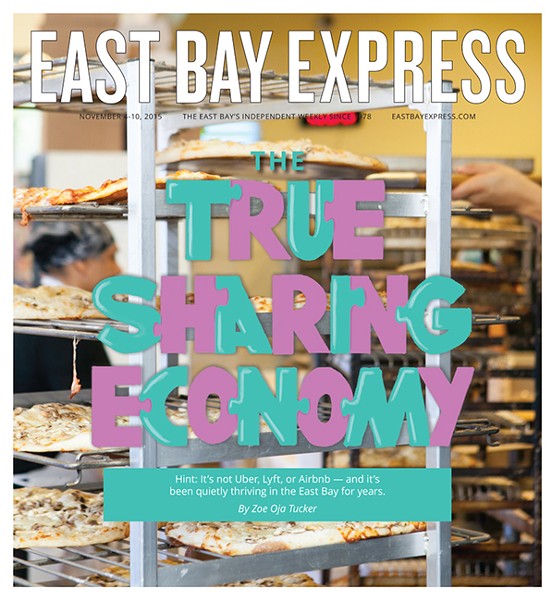 When we talk about the Warriors' incredible success, let's understand that much of that success is built on the back of the City of Oakland and on the backs of loyal Oakland and East Bay fans. Much of that success is based on marginalizing Oakland in the hopes that others won't notice, or worst, won't care. Much of that success is based on kicking Oakland out of the limelight and giving the attention to San Francisco. So far, the recipe of shoving Oakland aside and into the shadows has worked wonderfully well for the Warriors and, in a way, reflects poorly on many in the Bay Area who are just on the bandwagon and view the disrespect that Oakland must endure as just collateral damage.

The corporate pro-San Francisco media for the most part goes along with this travesty and refuses to hold Warriors' ownership and the NBA accountable for the disrespect and economic harm being perpetuated on Oakland.

Let's remember the folks in Oakland who will lose their jobs when the Warriors take [its] home dates to San Francisco. Let's remember the hotel and restaurant employees who may lose their jobs in Oakland when the concerts and ice shows are moved to the shiny new arena in San Francisco. Let's also remember the potential loss of revenue for the City of Oakland and the negative national punch in the eye the city will receive as the Warriors send an implicit message that they don't view Oakland as a good place for their $1 billion investment.

All is not rainbows and unicorns in Warriors World and someone needs to call out the Warriors and the NBA for how they are hurting and disrespecting their host city.

I am a parent of a child who graduated from Mills College, as well as chair of the MFA in Writing Program at California College of the Arts, where we have a small book arts program begun by the great Betsy Davids. Her retirement left us with a quarter-time instructor who teaches in other programs and many fewer students, who take advantage of the one course we can offer every year. I completely support the great artist Kathy Walkup's remarkable years doing this work. Thank you for the article. Organize students, organize faculty to sustain this important program.

Decolonize Your Diet — too bad it's not! Unfortunately, I knew the authors would follow the path of most colonized people, to recommend a veggie-centric diet.

It's true that most people do need to stop eating processed "foods of commerce." Those are not healthy, but also having the freedom and knowledge to recommend fresh lard over processed canola oil would be an important stand to make for traditional diets and would be free from Western medical myths.

How sad the authors, along with Bryant Terry, play right into colonizing Eurocentric vegetarian diet — that is the biggest farce and shows unfortunately how colonized they are. All traditional diets included animal fats for substance — and whole cooking of animal parts. I also have studied diets via old cookbooks. I found the truth of native people — don't go with [these] recommendations and white people diet trends.

Express Arts & Culture editor Sarah Burke won a first-place award in the 30th Annual Excellence in Journalism Awards of the Society of Professional Journalists, Northern California Chapter. Burke's award came in the Arts & Culture category for her October 15, 2014 cover story, "Moral Combat." Her piece explored Gamergate, the vicious harassment campaign that's been chasing women out of the video game industry. Her report also looked at how East Bay female developers have been trying to reclaim the video game art form.

The SPJ said Burke's story "captures nuances about gaming and the kinds of voices that are trying to break into a world that is fighting to keep them out."

Burke's award was in the print/small division for newspapers of less than 100,000 circulation. The Express was the only alt weekly to win an award in this year's contest.