Readers sound off on the true nature of skateboarding, the Peralta Colleges, and local sports teams. 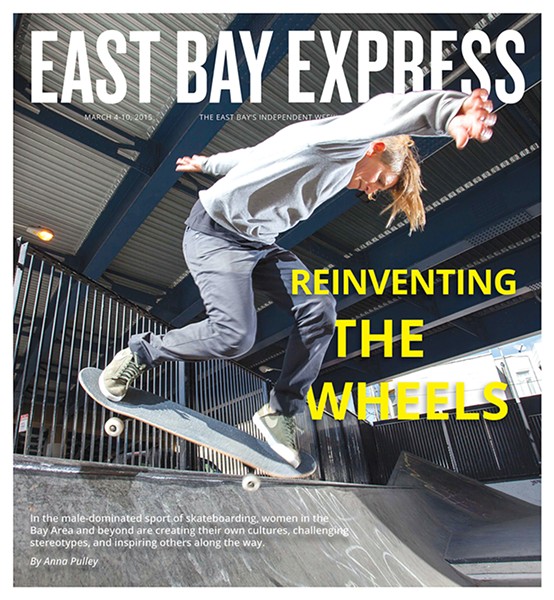 Skateboarding Is a Culture

I am disappointed in your reference to skateboarding as a "sport." You could have used the word "culture" but instead, on the title page of your paper, you gave in to the Tony Hawk enterprise and X-Game-ification of skateboarding despite being based so close to such a historically key location of something that has had such a great impact on people's lives. I hope you do not overlook such a thing in the future.

What is going on in this particular district is not unknown throughout the whole community college system here in California and elsewhere in the nation. "Equal pay for equal work" is our mantra, and sooner rather than later, we are going to collect on it! Full-time faculty and administrators hold our collective lives in their greedy hands and will stoop to bullying and crass intimidation to try to silence us at every turn, from denying us classes we have taught (and taught well) for years to allowing hapless and neglectful full-timers who cannot make their enrollments on their own to abscond with our classes at the last moment. Overload indeed! It's nothing short of theft.

The rules and regulations that we did not have anything to do with governing our employment have always been negotiated by full-time faculty and administrators with little or no regard for our ongoing and sustaining contribution to the life of the colleges at which we teach. Without us, there would be no school. Period. End of sentence.

Join the California Part-time Faculty Association (CPFA) on April 11 at Foothill DeAnza College to celebrate our movement, share our successes, and plan for the future. Go to CPFA.org and register for our spring conference. Sitting at home is not the way to make change happen!

There is a lot being thrown back and forth here, and the real problem may be too many cooks in the kitchen. One of whom is Lew Wolff, who indeed wants to run away with the A's to cheaper grounds where the locals will worship his every breath. Dream on, Wolff!

As for the Raiders, they have said over and over that they want to stay in Oakland. They keep signing one-year deals to prove it, too. Yes, there is talk (and that is all it is) of relocation to other cities with two teams sharing the same park (ugh, Carson City?) or somehow selling off part of the Raiders to entice a dual ownership investment, but currently nothing is written in concrete.

How this can get done is with investment dollars for hotels, retail, restaurants, and some housing to be leveraged against construction and the necessary buyout of current businesses around the park. By the way, has anyone seen the multimillion-dollar BART extension to the Oakland Airport? Can you imagine it connected to multiple hotels? Maybe this was forethought but now it provides a link that can connect all of this right to the Coliseum City site.

Now can you imagine this park to be more than sports? Oh maybe a huge convention center? Concerts and more? Now think about the tax revenue those could generate 365 days a year — the labor that would be employed there. And finally the profile of this complex nestled against the bay that touches it.

Hmmm ... it makes sense to me. Wonder what Lew Wolff is thinking now that he wasn't thinking five years ago?

Coliseum City Is a Pipe Dream

Everything about Coliseum City is make-believe. There simply isn't enough profit margin between construction costs and what people are willing to pay in rent to live in a third-tier location to have enough left over to finance billion-dollar stadiums. It's not going to happen. Oakland will lose all three of its teams — and I am okay with that.

What's up with NPR? Damn, two national NPR-contest winning artists right here in Oaktown — check out Glynn Washington at Snap Judgment. Seems we continue to be at the center of the universe by stepping up with fresh artistry — and it seems NPR is growing new and much-needed wings.

So excited to see this new informative column. Kudos to the Express for publishing this gem for all of us who are forming and expanding our families.

I'd also add 10th & Wood. It might even have a better fried-chicken sandwich than Bakesale Betty — not to mention the remarkable pulled pork.

Umm, There Was an Oakland Before 1999

These all seem like great places to eat — I for one appreciate the inclusion of an Indian restaurant on 79th Avenue and International Boulevard. That's not exactly the middle of nowhere, but I digress (I would not have expected an Indian restaurant to be there, either). However, I must remind you folks that there was an Oakland before 1999 (gasp!), and there are many places that would fight a for a spot on a list of quintessential Oakland restaurants and dives that are not mentioned here. Good eats, though!