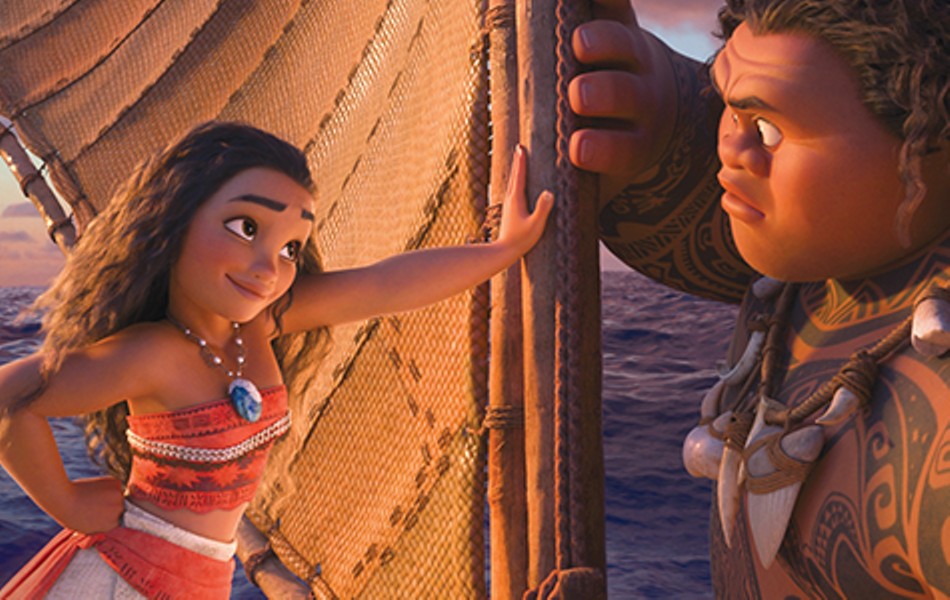 Moana, the latest animated entry in Disney's cartoon-ethnographic female-empowerment dossier, may take a five-year-old's point of view toward its Polynesian protagonists, but its visuals are volcanic.

There's trouble in paradise. Juvie princess Moana (voice of Auli'i Cravalho) doesn't get any respect from her father, chief of the island of Motunui, despite — or perhaps because of — her common-sense approach to reversing the lush tropical island's environmental decline. The high-spirited Moana dares to think outside the barrier reef. Out there in the forbidden deep, beneath the wide-open sea in a fantastical underwater realm, dwells the exiled Maui (Dwayne Johnson), a humongous, shape-shifting, ancient demigod whose return to power involves tseemingly endless tussles with rival monsters and deities. Plucky Moana teams up with wacky Maui for the campaign to rescue the island.

For best results, pay absolutely no attention to the dialogue, no matter how realistic it may sound at first. Trying to follow Moana's quest logically is an exercise in futility. Instead, focus on the tidal waves of top-dollar spectacle and accompanying robo-tunes, all blasted at maximum ear-wrecking levels. They're extravagant even by Disney standards. Stand by for a limitless cascade of crescendos and climaxes, a typhoon of toon mayhem, and yet another chance for directors John Musker and Ron Clements to show off their impressive array of kiddie-entertainment firepower. If you still feel compelled to exercise critical judgment after 107 minutes of that, you haven't been eating enough sugar. Legalize Moana! It's strangely addictive.