An experimental show like Noise Pop’s Opening Night at Rickshaw Stop is a gamble: The distorted guitar feedback, disturbed vocals, and grinding percussion are either ultimately fascinating or alienating to an audience. With four acts on the bill, last night was a mixture of grating and gratifying, but those who endured to watch Kim Gordon’s post-Sonic Youth project Body/Head witnessed the range of emotion this music can convey. 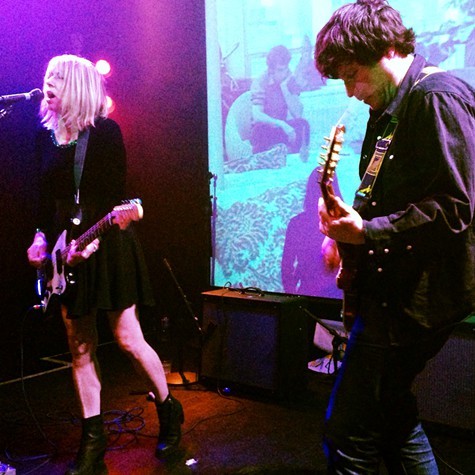 Gordon spent 27 years as the bass player and vocalist of Sonic Youth, a band whose early noise experimentation led to its seminal indie rock album Daydream Nation in 1988. Body/Head definitely leans toward the raw, earlier work of Sonic Youth (on indefinite hiatus after Gordon split with her bandmate and husband Thurston Moore), but it’s more aligned with the avant-garde, improvisational solo work of her new bandmate Bill Nace. Gordon and Nace littered the stage with several effect pedals, and projected an extremely slow motion scene from a black-and-white film that depicted a woman and a man sitting far apart in a stylish high rise apartment. It was the first clue that the female/male dynamic of Body/Head would be significant.

At first, all eyes were on Gordon, still blonde, delicate, and dressed in a short, vintage cocktail dress. Her breathy, bluesy vocals were also exactly the same, ranging from soft and mumbled to loud and moaned as she sang while tinkering with a guitar slung at her waist. Nace held his guitar close, rocking back and forth as it loudly droned. When Gordon stepped away from the mic and focused on her guitar — leaning it against an amplifier, thrusting it against the projected film, turning her back to the audience and Nace — his aggressive guitar riffs neared percussive as hers became more distorted. Throughout the set, Gordon and Nace clashed and came together, the noise at times tense and passionate, but also frail and vulnerable. By the end of the set, the couple in the film was sitting close and talking, how and what had transpired both on screen and onstage still a mystery to the audience.

Local openers Horsebladder, Burmese, and Noel Von Harmonson each offered a set that was different, but complementary to Body/Head. The project of Oakland poet and musician Elaine Kahn, Horsebladder’s performance felt like a lonely journey into her subconscious, filled with the repetitive sounds of funereal keyboards, primitive percussion, and looped vocals. Longtime metal-noise outfit Burmese played its first show since drummer Jay Korber was in a serious bike accident from which he’s still recovering (he watched from stage left in a wheelchair). Burmese, which normally has two bass players and two drummers (a position John Dwyer of Thee Oh Sees once held), delivered a tight, energetic set that included five covers of legendary punk band Big Black. Sic Alps' guitarist Von Harmonson showed his more personal side in a solo set of heavy, emotive guitar noise.