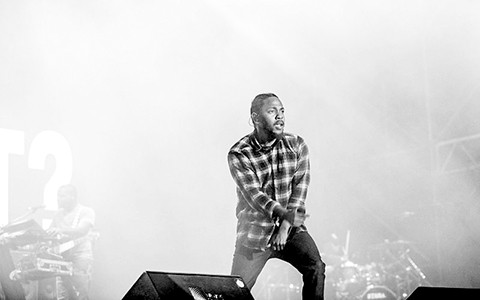 Fresh off a double-platinum certification for DAMN, Kendrick Lamar rolls into Oracle this Friday night for the Oakland stop on his tour supporting the blockbuster fourth full-length. The show is heavy on star power, co-headlined by Travis Scott and D.R.A.M., the quirky croon-rap hit-maker behind “Cha Cha” and “Broccoli,” among numerous other jams. Looking at footage from earlier dates this summer, it’s an arena experience on a scale worthy of its headliner. There are giant, kaleidoscopic projections and Kill Bill-esque mock movie scenes playing off of Kendrick’s Kung Fu Kenny persona. Travis, true to his Metallica T-shirt aesthetic, even flies around on a giant mechanical bird. For the folks looking to devote their entire day to the super-fan experience, the accompanying DAMN. Pop-Up will open up for one day only in Downtown San Francisco earlier in the afternoon. The shop features limited edition tees, hoodies, and other tour merch (plus a healthy line of folks), and in some cities, King Kendrick has even showed up for onsite drop-ins.