Standing on the corner of 92nd Avenue and International Boulevard with trash strewn on the sidewalk as a backdrop, Oakland Councilmember Rebecca Kaplan officially announced her candidacy for mayor this afternoon. The campaign chose the location because it was the spot where a dead dog had been left on the sidewalk for a week a last month despite repeated calls by neighbors to Oakland Animal Services. “I know that every single corner of Oakland deserves to be treated with respect and deserves a government that responds when people call,” said Kaplan. 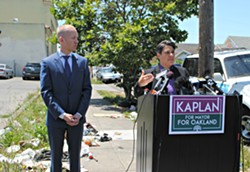 Both incidents are emblematic of government inaction, said Kaplan, since additional funding in this year’s budget was already allocated to help alleviate Oakland’s persistent problems with illegal dumping, its animal control services, and police staffing. “The amazing sorrow of what I’m talking about is that we did pay for them,” she added.

The decision to enter the race with just five months before Election Day is not based upon the composition of the current field of candidates, said Kaplan, but on negative experiences she had had within City Hall. When asked about differences between herself, Quan, and the rest of the candidates, Kaplan said, “Frankly, if anybody out there is a supporter of any of the other candidates, my message to them is not that they’re wrong.” Kaplan added, “I respectfully ask that they vote for me as their second choice.”