Justice Is A Verb: On Trump, The Need For Profiles In Courage, and Judge Wendell Griffen's Activism

Lessons in resistance from red-state Arkansas. 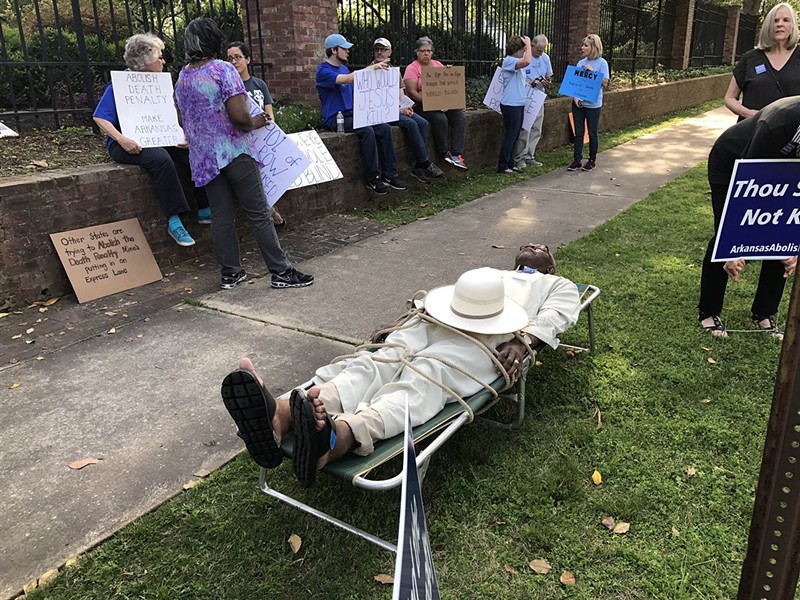 In the Trump era, many of us wonder what we can do to resist the political horrors on the horizon. This question is not only on the lips of activists, but also those in the Bay Area for whom politics seemed, pre-Trump, as merely an irritating distraction from a lively and fulfilling life.

Many in our community have taken to the streets to protect the people and gains that are under siege today. Contributions to ACLU and organizations that are resisting are up, as well. But the horror hits keep coming, and passage through Kübler-Ross’ five stages of grief is frustratingly slow.

As we consider this question for ourselves, there are an increasing number of profiles in courage, important and inspirational actions. One admirable example can be found in the state where I grew up, Arkansas, where a Christian judge, Wendell Griffen, has resisted and organized against the mass execution of men on death row.

In response, a phalanx of anti-death-penalty lawyers and activists sprang into action. This hardy group has found that the best way to stop executions is to simply gum up the works. With clever legal strategies, they placed one difficult argument after another in front of judges, basically daring them to get the blood of a wrongful killing on their hands.

Of course, the death penalty is not a modern or Trump-specific issue. Since the beginning of our country, capital punishment has been part of the national creed. California has a death penalty that voters repeatedly refuse to eliminate. The first extant American legal document with important rights for citizens, the Massachusetts “Body of Liberties” of 1641, included a dozen offenses, such as blasphemy, murder, and witchcraft, for which the death penalty could be ordered. And, in a crass political move, President Bill Clinton supercharged his political shift to the right in 1994 by exuberantly executing Ricky Ray Rector, a mentally challenged inmate in Arkansas.

But while the death penalty is pre-Trump, the forces and values behind Arkansas’ macabre dance of death are the same as those that currently control the U.S. Congress, most state legislatures, and most governorships: arrogant elected officials who are insensitive to what it means to build and maintain a just and humane society.

As part of the complex legal and ethical drama, the distributor of one of the death drugs, McKesson, came into the Pulaski County ​Circuit ​Courtroom of Judge Griffen requesting an order blocking the use of its products. McKesson claimed they were duped by the state as to the reason for its drug purchase.

For years, Griffen has been an effective lawyer and appellate judge. After hearing the arguments, Griffen issued an order blocking Arkansas from using a lethal injection drug. The state immediately appealed.

As well as being a judge, Griffen is pastor of the New Millennium Church in Little Rock, a devout believer in the progressive view of Jesus, and a big fan of the theology of Oakland’s Allen Temple Baptist Church. In his copious writings, he argues that “justice is a verb.” At a rally in Little Rock on Good Friday, he and his congregants — many of whom I know — attended an anti-death-penalty rally. Griffen, fully aware of the consequences, laid down on a gurney like a prisoner awaiting his death.

Griffen was immediately excoriated by the right, which claimed to be aghast at the violation of judicial ethics by a sitting judge. The state’s attorney general, a leading national light in the Koch family agenda, was livid. Ethics charges began to fly and, currently, the state Legislature is considering impeachment proceedings against Griffen.

For those who want to stand against Trumpism, in both red and blue states, Griffen’s stance contains many messages. And the matter of what defines success is complex: Even after the efforts of Griffen and others, Arkansas was able to execute four men.

But there are two lessons. The first is to live your resistance. Like many before him, resistance for Griffen means being willing to take a personal chance — to be willing to lose something in order to gain a greater good. For too many today, protest is professionalized, with large salaries for those in the nonprofit “activist” sector, causing many to be unwilling to rock the boat. Griffen’s heroism recalls Muhammad Ali, who sacrificed a great part of his boxing career, and faced years in jail, by refusing to allow himself to be drafted, saying those immortal words, “I ain’t got no quarrel with the Viet Cong.”

A second lesson is that, when resistance actions threaten the status quo, many liberals howl. Nothing scares the established, even progressives, like disorder. And it is hard to imagine meaningful resistance to the tsunami of Trump atrocities without some upheaval.

History is a good guide here. When Martin Luther King Jr. went to Birmingham in 1963, the good preachers of the town asked him to leave. His marchers were breaking protocol, and his actions were “unwise and untimely,” they said. In response, skewering the establishment ideas of deco-rum, Dr. King wrote in his “Letter from the Birmingham Jail” of the need to resist “dangerously structured dams that block the flow of social progress.”

The same thing happened in Arkansas last month. After the picture of Griffen went viral, many opposed to Trumpism joined the chorus against Griffen, as well. With the words of the Birmingham preachers who condemned King echoing in the background, a moderate columnist for the Arkansas Democrat-Gazette called Griffen “zany,” and put him in the same bucket with the Koch clones in the Legislature. The state’s voice of liberal journalism, Max Brantley, who writes for the Arkansas Times, a weekly paper that is a “cousin” of the Express, condemned Griffen for his lack of decorum, and for giving a “gift” and “cover” to the governor by attending the rally with his church.

As crazy as Trump seems, his henchmen are clever, and successfully opposing them is challenging. But examples such as Griffen are illustrations that give us hope, and lessons and paths for those working for good. Even if they come from red states.