Next year’s mayoral race in Oakland is certain to be dominated by public safety, and candidate Joe Tuman vowed today to make that the central platform of his campaign. The university professor and local television political analyst, who ran an unsuccessful bid for Oakland mayor in 2010, announced this afternoon his run to challenge Oakland Mayor Jean Quan in 2014 with plans to reverse the city’s nagging problems associated with violent crime, including adding up to 350 new police officers. 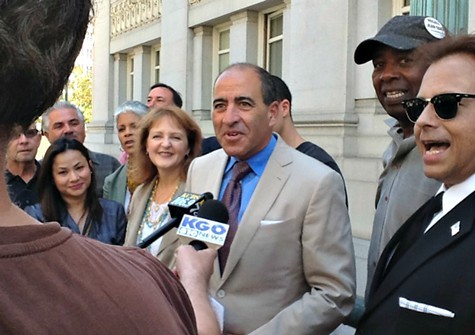 “I want to be clear that my campaign for mayor of this city will really focus on the real issue — the dominant issue, the narrative of this city — and that is public safety, or, more accurately, the absence of public safety,” said Tuman during a press conference outside Oakland City Hall today. “What we need in the city going forward is, and what I intend to do in my campaign for mayor, is recalibrate a new normal.”

Tuman’s recalibration is not only psychological; he envisions a fully staffed police force that follows constitutional policing and fights crime, and is also a visible deterrent for people making bad decisions. “Police don’t just arrest, they deter, and we can’t have effective deterrence in this city unless we have enough officers,” said Tuman.

Part of Tuman’s campaign platform calls for hiring between 300 to 350 new police officers over the next four years and running up to five police academies each year. The cost of some of the academies could be outsourced to the Alameda County Sheriff’s Department and other jurisdictions, he said. To pay for the additional staffing, a new parcel tax replacing Measure Y, which sunsets at the end of next year, could place new revenues in what he labeled a “lockbox,” and would be reserved solely for adding new members to the police ranks and organizing academies. “For me, this is a sine qua non of government,” he said. “If you can’t provide public safety for people, then why are we all here?”

The fate of the city’s three professional sports team will also be a hot-button campaign issue as the A’s, Raiders, and Warriors are all actively pursuing new stadiums. “I don’t want to see any of the teams leave,” said Tuman, but added that professional sports are a business in which owners received lucrative contracts from tickets, merchandise, and television deals. “I’m not inclined to spend public money — public dollars that we don’t have — to help people who are already wealthy get wealthier,” he said.

Although Tuman believes the Warriors will ultimately move to San Francisco, he said the A’s “may stay if we create the right environment for them.” That could include the Howard Terminal site near Jack London Square, which he called a “smart fit.” While he won’t advocate using public money for the project, he is amendable to leveraging the city-owned land for a ballpark. Tuman described the Raiders stadium situation in less dire terms, saying the team is the least likely to leave of the three sports teams, while noting its brand identity and football lore are closely linked to the city. “They are really, truly of Oakland’s origins,” he said.

The other announced candidate for mayor next year is Port of Oakland Commissioner Bryan Parker. In 2010, Tuman finished fourth in the ranked-choice voting race. Quan, however, finished second in the first round of voting, but ultimately upset Don Perata with a high percentage of second- and third-place tallies. Tuman said, in hindsight, the prevalence of voters who viewed Quan as not their first choice became a disadvantage for her, particularly after her botched early attempts to quell the Occupy Oakland movement. “What we need in the mayor’s office is a strong mayor, and we want one with a mandate,” said Tuman. “I want a mandate.”