California's greenhouse gas emissions declined last year. But it was primarily due to the rainy weather — not the governor's climate policies. 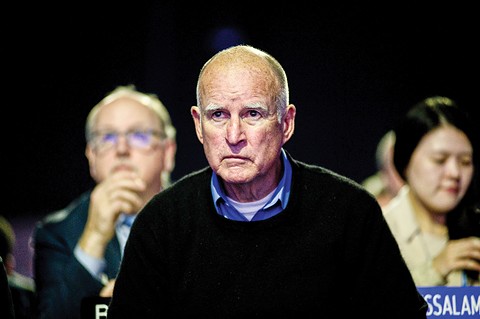 California's greenhouse-gas emissions declined about 5 percent last year. And the reduction has helped make Gov. Jerry Brown something of an international icon in the realm of climate change policy and progressive action to slow the warming of the Earth. But analysts say Brown's landmark program to cut emissions — the state's cap-and-trade policy — is not responsible for the state's progress. Instead, recently released research found that last year's emissions drop was due primarily to an increase in hydropower related to heavy rainfall. As for cap-and-trade, critics said the program appears to be failing.

Liza Tucker, an activist with the group Consumer Watchdog, said this is because oil industry lobbyists have wielded considerable power in Sacramento. "The Western States Petroleum Association dictated what should be in the [cap-and-trade] legislation, and the final language prevents regulators from imposing direct restrictions on oil refiners," Tucker said.

The state's industries and vehicles emitted a total of 324 million metric tons of CO2 equivalents in 2016, down from 340 million in 2015. But the progress came mainly from the electricity sector, where carbon dioxide equivalents from production dipped 23 percent, from 74 million metric tons to 56 million, according to a new report by the climate change policy think tank Near Zero.

"Emissions are down sharply in sectors covered by the cap-and-trade policy," said Danny Cullenward, an energy economist and lawyer with Near Zero who helped write the report. "A lot of people have said, 'This is great, the program is working.' And we wanted to take a closer look."

Cullenward's analysis concluded that most of the reductions could be attributed to cleaner electricity, chiefly the result of increased hydropower production as heavy rains fell in the fall of 2016. A drop-off in imported coal also contributed to the decline.

"The drought eased in 2016, and that meant increased hydropower at dams," Cullenward explained. That's what drove the emissions dip from 2015 to 2016.

As for the cap-and-trade program, it doesn't appear to be impacting pollution sources much, if at all. Emissions from transportation — currently the state's most significant source of greenhouse gases — and oil refineries increased between 2015 and 2016 by a combined 3 million metric tons.

The fossil fuel industry displayed its ability to shape climate policy earlier this year in the state Capitol. In April, oil lobbying firm Latham & Watkins recommended that lawmakers limit the ability of the California Air Resources Board to impose regulations on industrial polluters. Three months later, state lawmakers gave industry essentially everything it wanted in a new law, Assembly Bill 398, that extended the cap-and-trade program to 2030. The bill explicitly prohibited local air districts from imposing emissions restrictions on factories and refineries that are already covered by the cap-and-trade system.

Tucker said California has a "toothless" regulatory program that allows polluters to continue to emit dangerous volumes of greenhouse gases. "The oil industry rigged the legislation to make sure the cap-and-trade system was hobbled," she said.

In regions elsewhere, cap-and-trade systems have been deemed ineffective to reducing greenhouse gases. A May report from the Congressional Research Service found that a cap-and-trade system imposed on nine eastern states in 2009 was "arguably negligible" in reducing greenhouse-gas emissions. In Europe, similar programs are failing, Tucker said. "These programs just give too many allowance for emissions, and they set the caps too high," she said.

In addition to capping emissions, the cap-and-trade program creates a system by which industries can buy and sell allowances to emit carbon dioxide and other greenhouse gases. The idea is to financially motivate polluters to emit less. "It's supposed to create an incentive [to stop polluting], because it might be cheaper to change their behavior than buy the allowances," Cullenward said.

However, about half of the allowances are distributed free of charge, he explained, and the rest are cheap — $13 per metric ton of CO2 equivalent.

California's near-term emissions reduction goals appear to be within reach. The California Global Warming Solutions Act of 2006 — otherwise called AB 32 — requires the state to reduce emissions of greenhouse gases to 1990 levels by 2020. However, Near Zero's report warned that the state's longer-term targets seem unrealistic under current policies. SB 32, passed in 2016, essentially extends AB 32's programs by 10 years, calling for reducing emissions a further 40 percent from 1990 levels by 2030. But pollution from motor vehicles and oil refineries continue to rise, and Cullenward predicted that greenhouse emissions will exceed the cap-and-trade limit by sometime in the early 2020s. "The state will need to reverse these trends as it pursues its substantially more ambitious 2030 climate target," his report stated.

Tucker has argued that Brown's reputation as a climate leader is the result more of self-congratulatory campaigning than of action that reduces greenhouse emissions. Oil lobbyists have donated nearly $10 million to Brown and his causes and initiatives since 2011, according to a report from Consumer Watchdog. Tucker said the governor "has done some amazing things" to promote renewable energy and clean electricity, "but he continues to do nothing to reduce production and refining of oil and gas. He could be the climate hero he wants to be. He could ban fracking tomorrow. But he protects the oil industry. And he allowed them to write the legislation that extends cap-and-trade."

Brown also has reacted angrily to his critics. Last week in Bonn, when activists interrupted his speech by yelling, "Keep it in the ground," referring to keeping fossil fuels buried rather than burning them, the governor shot back, "Let's put you in the ground."