Federation Brewing becomes the latest to join the area. 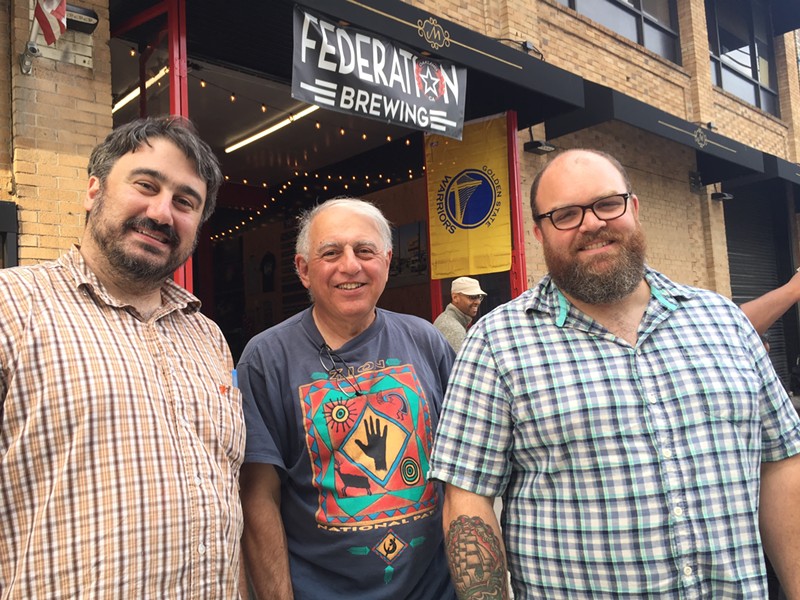 Jack London Square is suddenly a hub of craft-beer goodness.


For years, Beer Revolution went it alone. But now there’s Independent Brewing Company on Harrison Street, and the forthcoming Original Pattern Brewing Co. on Fourth Street. And this is not to mention short walks to Old Kan or The Trappist.

The latest brew edition to the JLS district is Federation Brewing, the former gypsy outfit that settled into a 2,500-square-foot brewhouse and taproom on Third Street this past February. Owned by brewer Aram Cretan, his father, Larry, and his childhood buddy Matt Hunter, the trio does the hoppy-beer/IPA thing, for sure — but they’re also really passionate about community, and brewing things just a little differently.

During a visit last week, for instance, Aram pointed out that he’s had a kettle sour resting for a couple days. They’re also planning a ginger gose collaboration with The Good Hop, for its anniversary. And Federation’s flagship brew, the first it ever produced, is a stout. And not just any stout: It’s low-alcohol (5.3 percent), light in body and devoid of syrupiness, and with a dry and abundantly roasty finish, like coffee without the kick, a perfect beer for an overcast East Bay day.

“I want to convert people who think that they don’t like something,” Aram explained of his brew philosophy.

That said, Federation does have at least a couple IPAs on rotation (but, Aram and Matt warn, these are not high-gravity, palette-wrecker hop bombs).

Larry explained that his goal is to make Federation a place for community. Like most taprooms, there’s a food vendor pop-up nearly every day. On Sundays, live jazz goes down from 4 to 7 p.m. Trivia is Tuesdays. And they support local nonprofits on Wednesdays with their “Pints to Pledge” series, where a buck from every brew goes to a local charity.

For Aram, creating a scene for folks is what it’s all about. He shared how one of his favorite moments of owning a brewery so far was standing in the back among the fermenters, and just listening to the bustle. “The hum of people drinking and having fun, and drinking something that I made,” he described — that’s what it’s all about.