Iyasare chef-owner Shotaro Kamio is known for serving some of the most gorgeous — and tastiest — Japanese food in Berkeley. Now, Inside Scoop reports, Kamio has taken over Zut! on Fourth (1820 Fourth St.), located just a few steps away from his inaugural restaurant.

What Iyasare devotees might not expect is that the new restaurant — which will be rebranded, only slightly, as Zut Tavern — won’t serve Japanese fare at all, but rather European-influenced California cuisine.

When reached by phone this morning, Kamio explained that when he first started out as a chef in Japan he had specialized in what was known broadly in his country as “international cuisine,” which included French, Italian, and German dishes. At Zut Tavern, he’ll draw on that background, as well as on the past fifteen years he has spent in California, during which time he has become as much a devotee of the region's local, sustainably sourced meats and produce as anyone. (Indeed, even Iyasare, his Japanese restaurant, is heavily influenced by this approach.) 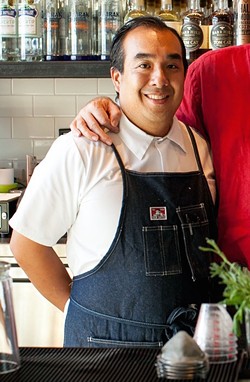 All of which is to say that the new incarnation of Zut shouldn’t be all that different in concept from its predecessor — and, perhaps, from Eccolo, the much-mourned-over Italian restaurant, before that. The restaurant will remain very casual (“like home cooking,” Kamio said); it will still serve pizza and housemade pasta. The menu will be shorter than Zut!’s, but it should change more frequently. Kamio also plans to add an oyster bar to the mix. And he has hired Nate Gabriel, a Michael Mina veteran who most recently cooked at the seafood-centric Jack’s Oyster Bar & Fish House, to be his chef de cuisine.

Kamio said he wasn’t necessarily looking to expand when the owners of Zut! reached out to him about the possibility of buying the restaurant.

“If this place is fifteen miles or twenty miles away, maybe I wouldn’t do it,” he said. “But fifteen steps away, I can do that.”

For now, Zut! on Fourth remains open with its old menu, but Kamio plans to close the restaurant later this month for staff training and minor renovations. Zut Tavern is slated to open in the middle of July.