Every morning, Shanell Qualls, 26, leaves her two toddlers with her husband and travels to the hospital where she gave birth to their third child on March 9. There, she is screened for a cough and other Covid-19 symptoms, has her temperature taken, and heads to the neonatal intensive care unit, where her temperature is taken again.

For two hours once a day she is allowed to hold and feed her son, who was born at 30 weeks plus two days, weighing only 3 pounds, 15 ounces.

Qualls gave birth to her son before the shelter-in-place order was first given on March 15. Already at high risk during her third pregnancy due to preeclampsia, a pregnancy condition characterized by high blood pressure, Qualls fainted during a hypertension episode and delivered her son by emergency Caesarean section.

A nurse herself, Qualls had been aware of Covid-19 and its risks, but had not anticipated the many difficulties of an emergency birth and sheltering in place with two small children at home and a premature baby still in the neonatal intensive care unit at a Santa Clara hospital.

"It has increased my postpartum anxiety for sure," Qualls said. "Instead of worrying about the silly things like sleep, I'm worried about germs."

Ana Rapoport, certified nurse-midwife and board member of the California Nurse-Midwives Association, works closely with patients at Kaiser Permanente's Walnut Creek Medical Center, and understands the concern about transmission of the virus to vulnerable neonates.

"The current recommendation if a mother tests positive for Covid-19 is that mom and baby be separated," Rapoport said. "There's a large concern for babies' exposure to Covid-19 and the ability of their immature immune system to handle the virus." 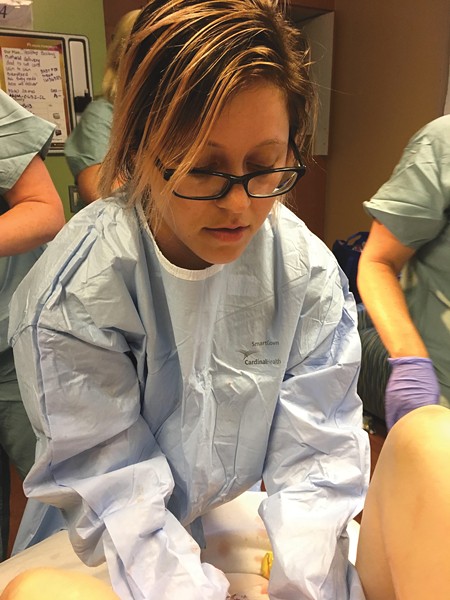 It is unclear how long mother and baby need to be separated. More testing is currently taking place that could indicate whether or not the mother can transmit the virus to the baby after she is no longer showing symptoms.

While Qualls' is concerned about protecting the health of her premature baby, many healthcare professionals are also concerned about how isolation and the stress of dealing with Covid-19 impact new mothers.

"That's a very challenging time," said Kathleen Belzer, president of the California Nurse-Midwives Association. "After women have a baby, especially I think the first time they have a baby, there's a huge adjustment that happens. They're sleep deprived, they are adjusting to a new role of mom, and also with their partner things are all changing."

"There's just a lot to cope with, and it's important to be able to have support around you during that time and I think that's really difficult right now; it will be difficult for women to find that," Belzer said.

Qualls said she does feel isolated due to the shelter-in-place order.

"We can't celebrate, have people come over, help with the house, help with the baby," she said. "It's almost like a little bit of a disconnect because you're not able to have your community come surround you."

Rapoport is also concerned about the lack of community and family support for new mothers during the Covid-19 shutdown.

"It's a big transition, and support is an essential part of that," she said.

Rapoport said that much of the support normally given to new mothers comes from mom groups and social gatherings where women teach each other about healing from birth trauma, coping with their postpartum body changes and breastfeeding. "When you take that away all of a sudden that can be really isolating, and so working hard to re-plan those resources with virtual resources is really important at this time," she said.

With new Covid-19 precautions and visitor restrictions in hospitals, many women are considering giving birth at home. "I really wish I could give birth at home, honestly," said Alyssa Maich, 37, who is due to have her second child on May 27.

Unlike Qualls, Maich has had an uncomplicated pregnancy.

"But I also understand that there are a lot of risks associated with that," Maich said. "I don't want to have something catastrophic happen."

During the birth of her first child, Maich had the option of having multiple visitors during labor and delivery, and after the birth. Only her husband will be allowed in the room during the birth of her daughter, and only if he passes through the Covid-19 screening process and does not exhibit virus symptoms such as cough or fever.

Belzer said that giving birth outside of the hospital may be a safe option for women with low-risk pregnancies, if they can find a birth center and midwife to help during the birth.

In addition to revealing just how important community is to new mothers, Covid-19 shines a light on the lack of prenatal and birth care in non-hospital settings in California.

According to the California Nurse-Midwives Association, an estimated 1,100 certified nurse-midwives operate in the state. About 700 work in the field.

In California, nurse-midwives must operate under physician supervision. By law, non-hospital settings such as birth centers must contract with doctors, although the obstetrician does not routinely attend births.

There are nine counties in California with no practicing obstetricians who can be contracted to supervise nurse-midwives in non-hospital settings. In densely populated urban areas and in underserved rural settings, this system creates barriers to receiving proper prenatal care and birth support. While all nurse-midwives in the state of California must be certified, not all who are certified are able to operate under physician supervision, and thus are not able to serve vulnerable populations.

"It just brings it all to a head because our maternal healthcare system is not working right now and women really can't get the options that they want, so we're trying really hard to change all of that," Belzer said.

Belzer and Rapoport both support Senate Bill 1237, which would amend the current law, the Nursing Practice Act, which places nurse-midwives under mandatory physician supervision. Introduced to the California Legislature by Sen. Bill Dodd, the bill would allow nurse-midwives to attend fully to any "normal" birth and offer their other skills and services such as pre- and post-natal care to a wider range of expectant parents.

Under the new bill, nurse-midwives could expand their care network to more areas of California, and more nurse-midwives could be hired in non-hospital settings where a physician is not required. Lessened restrictions on nurse-midwives' scope of practice would allow more expectant mothers, like Maich, to give birth at home or in a birth center, potentially allowing them to have more family support present if they are sheltering in place with friends or relatives.

Maich said she would have liked the option to have her mother present at her daughter's birth, or to at least meet the new baby after delivery.

"I'm due in the middle of the hump of the curve, from what predictions are saying," she said. "I'm trying to be hopeful."