Is Your Kitchen Hazardous to Your Health?

A range hoods can't do its job if you never turn it on (via Wikimedia Commons).

Here’s a quick poll for folks who regularly cook at home: Do you turn your range hood on every time you fire up the stove to sear off a steak or stir-fry some vegetables? Does your kitchen even have a range hood? If so, do you know how well it works?

If you answered no to at least one of those questions, you might be exposing yourself to dangerously high levels of indoor air pollutants — possibly even a level that exceeds the Environmental Protection Agency’s standards for outdoor air quality, according to a recent study by the indoor air quality research group at the Lawrence Berkeley National Laboratory. In other words, for frequent cooks, breathing the air inside your home may have many of the same deleterious health effects we typically associate with smog-filled city streets. 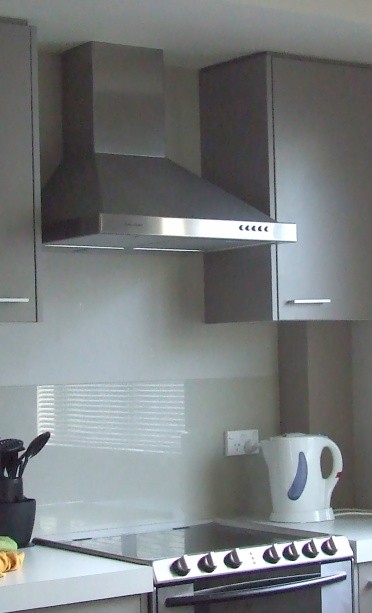 Headed by staff scientist Brett Singer, the Berkeley Lab’s indoor air group has been studying carbon dioxide and other gas-based emissions produced by home appliances for a number of years, but recently the research group has turned its attention to pollutants that result from the act of cooking itself. One of the group’s ongoing projects involves pan-frying burger patties and green beans over and over again, using a variety of different range hoods, in an effort to determine how effective those hoods are at capturing PM 2.5, or “fine particles” that are less than 2.5 micrometers in diameter — the EPA’s designation for a common category of air pollutants. Though it’s an imprecise definition, the easiest way to understand what these fine particles are is to simply imagine them as “really small grease particles,” explained Melissa Lunden, a staff scientist working on the project.

One of the group’s goals is to eventually develop a system for rating range hoods on how efficient they are in terms of capturing pollutants. Currently, hoods are mainly categorized only by their airflow capacity, which doesn’t necessarily correlate to how well they actually clean the air, Lunden said.

Part of the problem is that there are few existing standards and regulations in this area. Local health departments regulate restaurant kitchens, and the EPA oversees outdoor air quality. But the quality of indoor air in private homes is barely regulated at all — this despite the fact that the health effects that result from chronic exposure to those pollutants can be just as severe. Indeed, the group’s recent study found that about 60 percent of Southern California homes had pollutant levels that would illegal according to the EPA’s outdoor air quality standards. An earlier study headed by Jenny Logue, a research scientist with the group, found that long-term exposure to poor indoor air quality in the US has a negative health impact each year that is greater than that of all car accidents and all incidences of violence.

According to Logue, chronic exposure to PM 2.5, specifically, is associated with such ailments as strokes, chronic bronchitis, and even early mortality.

As often seems to be the case, the cooking methods that yield some of the best-tasting dishes are also the worst for your health. When, for a recent summer grilling feature, I asked local chefs to recommend their favorite home grilling techniques, several of them talked about jury-rigged methods you could do indoors with a blisteringly hot skillet, either on the stovetop or in the oven — techniques they acknowledged would likely fill the cook’s entire apartment with smoke.

“That would be an extreme PM 2.5 event in your home,” was all that Lunden had to say about that.

That said, Lunden and Logue stressed that their intention isn’t to be alarmist, and they certainly don’t want to encourage people to eat at restaurants all the time. “Cooking for yourself is healthier than eating out. We want people to cook — we just want them to think about ventilating the space they cook in,” Lunden said.

Or, as Logue put it, “If you can’t control the emissions, control the concentration that’s going to be in your house by ventilating.”

The scientists offered a few pointers: First off, as aggravatingly loud as it might be, you should turn on your range hood every time you cook. Those who live in an older apartment or house that doesn’t have a range hood can, at the very least, open a few windows. Better yet, any kind of fan can help to pull the polluted air out of your home, so install a small box fan in your kitchen window and turn it on while cooking. Short of that, turn on the bathroom fan — every bit of ventilation helps.