Charles Cushman's photographs capture the world as we knew it. 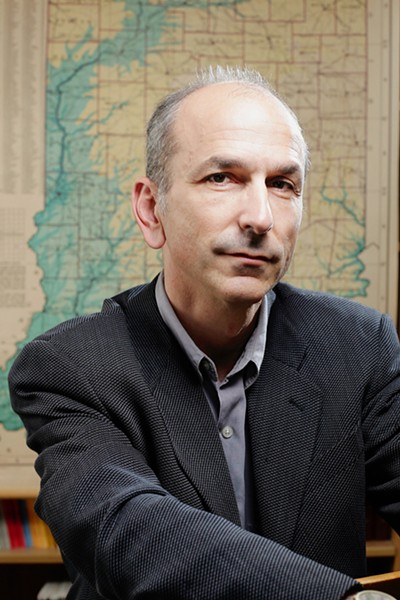 Think of all the pictures you snap from your phone and post instantly online for an extended social circle to admire: your very existence chronicled, tagged, and archived, making the minutiae of everyday life instant works of art history. Charles Cushman began his own personal photo project in 1938, using a 35mm camera and Kodak's new color film. He drove cross-country and back again, taking in everything from the windswept Central Plains to the first planks of our own Carquinez Bridge. And when he died, he bequeathed a box of 14,000 photographs to Indiana University, where historian Eric Sandweiss eventually stumbled upon them, fell in love, and organized them into The Day in Its Color. "I tend to be drawn in a general way to those of his images that express some sense of loss," Sandweiss said. "And there are a lot. He was not a melancholy man, but something in his eye was particularly attuned to something that was about to go away." Sandweiss will focus on Cushman's explorations around the Bay Area on Wednesday, June 13, at Builders Booksource (1817 Fourth St., Berkeley), examining how places have changed, or haven't, since the 1940s.

A farmhand turned ad-man, Cushman was not a professional photographer; his images were captured on everyday film. If you're used to a more somber, documentary-style take on America, these photos will seem particularly bright, brilliant, and sparkling. "People like Cushman saw a flower or a neon sign and thought, 'That's pretty, I want people to see what this looks like in the moment.' And that was the goal." Cushman also captured bits of this country that are immediately familiar: rural landscapes and portraits of hardworking Americans, pink plumes of steel smoke gracing blue skies like apocalyptic sunsets, young urban city centers at rush hour, Packards crowding downtown streets, and folks simply taking time to smile at the man with the camera while sunbathing by the sea.

Sandweiss tried to represent Cushman's perspective throughout the book, selecting and organizing photos as Cushman might have. "I tried to make this Charles Cushman's book — if he had ever put this together, what would he have wanted us to see?" But it wasn't easy, Sandweiss admitted. "He's left a very eloquent visual record, but almost no verbal record .... Cushman left behind five or six pieces of paper, but he wrote a Dostoyevsky novel in his pictures. So the question was, what is the story there?" You'll be tempted to fill in the blanks yourself when you reach page 126, which features dueling pictures of Cushman's rarely mentioned wife, Jean. That's not to spoil what Sandweiss holds as a necessarily chronological surprise, but these two startling portraits are truly worth those proverbial thousand words, and could be their own story of the woman behind the man, and of the private life of the man who photographed the general public.

The Cushmans ended their journey where we begin, in the Bay Area ("easier on his feet and heart," Sandweiss noted), settling in San Francisco's Marina District with a view of the original, crumbling Palace of Fine Arts. For a man who left almost no written record beyond everyday documents like résumés and a wedding certificate, Cushman's life has become an open book. 7 p.m., free. 800-843-2028 or BuildersBooksource.com