In Defense of Fast-Food Sushi

How Yo Sushi — a new "crazy rolls" joint in Albany — helped cure me of my inner sushi snob.

Bert Johnson The "Solano" and the "Spicy Rainbow" are two of the hundred or so rolls sold at Yo Sushi.

In a recent blogpost for Food & Wine, Anthony Bourdain — writer, TV personality, espouser of strong food opinions — enumerated six "punishable-by-death" sushi commandments: things you shouldn't do at a sushi bar unless you want to subject yourself to the scorn of the knife-wielding master behind the counter or, just as likely, of that one guy you knew in college who learned everything there is to know about Japanese culture from his semester abroad.

At Yo Sushi, a new fast-food sushi joint in Albany, chances are high that you'll violate three or four commandments within the first five minutes of your meal. This is the class of American sushi restaurant that specializes in "crazy rolls," so it seems like you would be remiss not to try one of the giant, everything-but-the-kitchen-sink flavor bombs, mayonnaise-laden though they may be. Despite Bourdain's warning to avoid at all costs, you might find Yo Sushi's dozen or so variations on the California roll — fake crab and all — hard to resist. And you'll almost certainly be guilty of mixing a slurry of wasabi and soy sauce for dipping — a big no-no to the raw-fish purist.

Look, I liked Jiro Dreams of Sushi as much as the next food nerd, and, in my more mansplain-y moments, I too have preached the virtues of unadorned nigiri — perhaps to the chagrin of the less-snobbish sushi eaters in my life. But I have to say: I enjoyed my meals at Yo Sushi beyond expectation, especially given that you can buy a veritable feast for less than $20 a person.

Joe Kim, the restaurant's Korean-born proprietor, opened the original Yo Sushi in Fairfield in 2002 and slowly expanded to the south and east — first to Vallejo and Martinez and then, more recently, down to the East Bay proper, with newish restaurants in Alameda and Albany. He's remodeled the old Zaki Kabob spot on San Pablo Avenue so that it resembles nothing more than the clean, well-lit fast-food eateries where teens and twentysomethings congregate in any number of Asia's modern, cosmopolitan cities. The space is a kaleidoscope of bright yellows, oranges, and greens — of lucky-cat bobbleheads, Doraemon illustrations, and K-pop music videos.

Yo Sushi's menu is dizzyingly vast, consisting not only of sushi, but of almost every genre of mainstream Japanese food — teriyaki-sauced and other assorted rice bowls, katsu (fried pork or chicken cutlets), tempura, udon, and even tonkotsu-style ramen, the newest addition. There's no room on the signboard menu behind the counter to even begin to list the hundred or so different sushi rolls (which, in typical fashion, tend to have outlandish names like "Angry Lion King" "Three Amigos," and "Japanese Lasagna"). For these, you'll have to consult the paper takeout menu.

Of course, the idea here isn't to serve the best sushi that money can buy. Instead, Yo Sushi aims for a kind of middle ground: pretty good sushi served quickly, and without pretense, at an affordable price. Before he opened his first handful of restaurants, Kim explained, he felt that sushi was something that was only accessible to the wealthy. Why not open a place where regular folks could eat every day? And instead of sticking only to the kind of "pure" raw-fish preparations, the sushi — like the atmosphere — tends toward fun and fusion-y. It's what a friend of mine calls "college sushi."

Here's where I feel the need to point out the obvious fact that the Bay Area has a lot of inexpensive sushi joints that serve crazy rolls, and most of them are pretty bad. Where Yo Sushi sets itself apart is in the quality of the fish — which, true to Kim's word, I found to be about as good as what you'll find in your typical mid-tier sit-down sushi spot — and sushi rice that has a texture that may not have been perfect but was miles better than the stiff, pre-refrigerated stuff served at cheaper places. Just as important, there was a sense of restraint not typically associated with these kinds of Americanized rolls. Sure, various sweet and spicy sauces were deployed, and the deep-fryer got a ton of mileage. But somehow, at least in the rolls I tried, all the flavors were well-balanced.

The "Spicy Rainbow," for instance, was great. This was your basic spicy tuna roll — arranged upright so it resembled the cross-section of a curled serpent — on top of which the chef had draped pieces of avocado, salmon, tuna, and unagi (broiled eel) before cutting, so that each piece offered a slightly different combination of flavors. Better yet was the "Solano," which was, in its own way, a masterwork in sushi construction: A layer of seared (but still mostly raw) tuna and avocado was wrapped around a sweet, mayo-laden surimi (fake-crab) salad. Inside of that was a layer of rice, and inside of that, toasted seaweed, a tight bundle of cucumber, and, in the very middle, deep-fried tempura shrimp. Lightly brushed with a sweet, umami-laden "unagi sauce," these were all too easy to scarf down — the kind of spread that disappears in minutes at a potluck dinner.

The craziest dish I tried was the Yo Nacho, for which crispy, deep-fried wonton shells formed the base of a kind of "taco" topped mostly with chopped surimi and mayonnaise, with tiny orange globules of flying fish roe, avocado, and some more of that lightly seared tuna mixed in as well. It was sweet and spicy, and perhaps more whimsical than delicious. I would have liked it more if the chef had been a bit more generous with the fish. 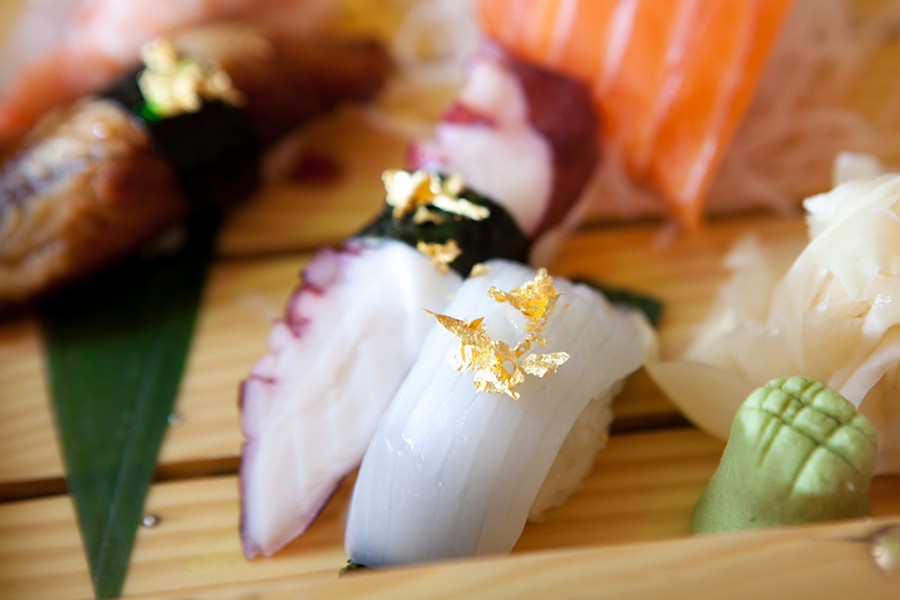 The biggest surprise was how good the simpler, more traditional Japanese fare was at Yo Sushi. Both the nigiri & sashimi combo (available with optional edible gold flakes) and the chirashi (or "scattered sushi") rice bowl were generously portioned — again, with thick, better-than-expected slices of raw fish. Yes, the tuna was a bit too mushy, and the octopus, a little too chewy, but, given the price, these were relatively minor quibbles. The chirashi, in particular, was about as good as you can get for less than $15.

The same could be said for the non-sushi items I tried. The tempura udon set meal certainly didn't feature a broth that was as wholesome or complex as the version at Oakland's AS B-Dama — my favorite in the area — but for $7.50, it was a generous spread of food: a huge bowl of soup and toothsome noodles, plus a big pile of batter-fried vegetables and shrimp and a spread of assorted pickles. But what really impressed me was the grilled salmon collar appetizer, which was a simple, traditional preparation done exceedingly well — a combination of nicely charred pieces of fatty skin and the soft, tender flesh of the cheek, which made for good picking. No messing around with crazy sauces here: just salt and lemon wedges.

If I had an unlimited budget and two hours to kill for a leisurely meal every night, I'd happily eat at a "serious" sushi restaurant like Sushi Sho in El Cerrito once a week. As it stands, though, on a random weeknight, when the craving hits for raw fish and — yes, at risk of having my "food expert" card revoked, I'll admit it — for sweet-and-spicy mayonnaise, you'll much more likely find me getting my fix at Yo Sushi.