Illustoria Grows With Its Fourth Issue 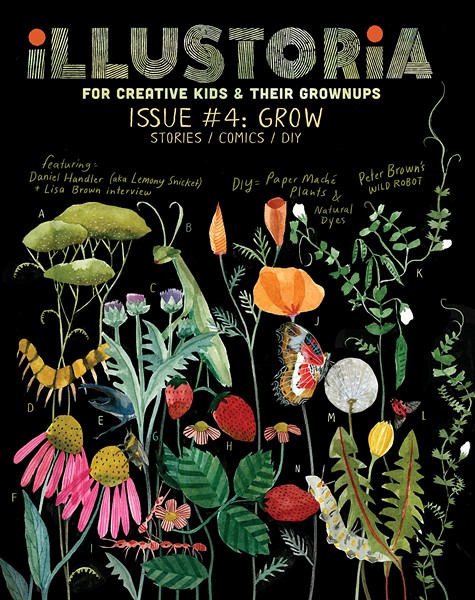 Illustoria, a magazine based out of Berkeley and founded and published by Joanne Meiyi Chan offers itself as a publication “for creative kids and their grownups.” Chan, an Oakland native, was previously a children’s book editor at Lucasfilm and wanted a print product for children ages 6 to 12 that also engaged their parents. Flipping through the pages of the quarterly publication’s latest issue, you’ll find an interview with Daniel Handler and Lisa Brown promoting collaboration, comics, and illustrated DIY tutorials and activities all loosely under the theme of “Grow.” The magazine is the colorful product of collaborations between Illustoria’s editorial staff and local authors and illustrators. Its newest issue is available at most independent bookstores in Berkeley, Oakland, and Alameda as well as some East Bay branches of public libraries. Chan counts these bookstores as the strong advocates that keep Illustoria going. As a grown up, I particularly enjoyed the magazine’s book recommendations section, which featured a diversity of children’s books from Rita Williams-Garcia’s Oakland Black Panther tale One Crazy Summer to Yuko Higuchi’s fantastical Magical Coloring Museum.

Available in select independent bookstores and online, $14 per issue, Illustoria.com.