He's now one of her staunchest supporters — and he's running for mayor, too. 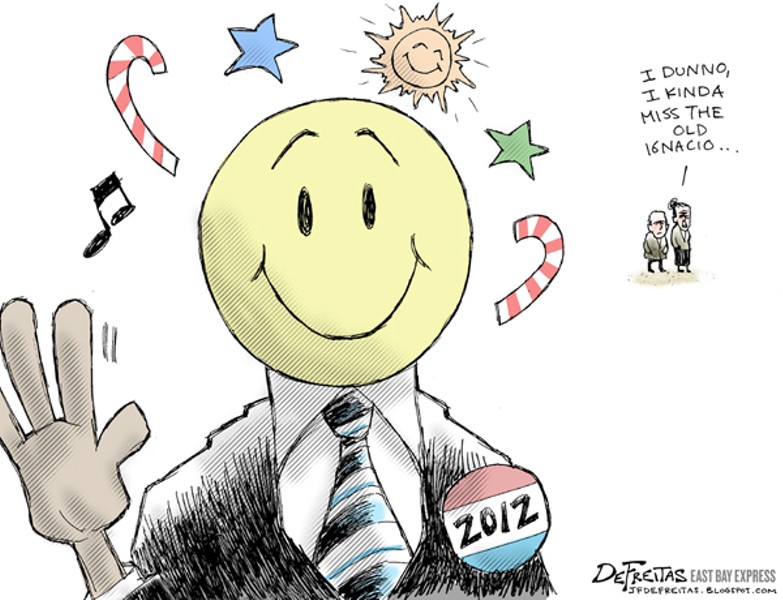 Throughout much of the past decade, Councilmembers Ignacio De La Fuente and Desley Brooks were fierce political foes. The two occasionally traded allegations of corruption, and tried to oust each other from office by backing opposing candidates. But over the past year or two, the De La Fuente-Brooks feud has thawed considerably. Then last week, the onetime enemies engaged in what amounted to a public lovefest as De La Fuente rushed to Brooks' defense after she was implicated in political wrongdoing.

At one point during last week's council meeting, after Brooks' questionable involvement in a swanky new teen center underwent a detailed public airing, De La Fuente remarked that the council had "wasted two or three hours" on the matter. He then voted to block an attempt by City Administrator Deanna Santana and Councilwoman Libby Schaaf to slash funding for Brook's teen center in light of the fact that the city is nearly broke. He also downplayed charges that Brooks had violated Oakland's separation-of-powers laws that forbid councilmembers from interfering with city staff members and launching and operating their own government programs — as Brooks had allegedly done with the teen center. "I think all of us, at one time or another, tried to tell staff what to do," De La Fuente said, after announcing that he would oppose any attempts by the city to hire an independent investigator to examine Brooks' actions.

But De La Fuente wasn't done. He also had no problem with Brooks' refusal to recuse herself from voting on whether Santana should continue her probe of the matter — even though Oakland's City Attorney's Office repeatedly said that Santana had already uncovered troubling evidence about Brooks and that the councilwoman had a conflict of interest. "There are potential facts, including some that have already been disclosed, that could illustrate — that could demonstrate — that there's been a violation of [city] charter provisions ... where there could be penalties or financial implications for you — that's a conflict of interest for you," Chief Assistant City Attorney Doryanna Moreno explained to Brooks, telling her repeatedly that she should recuse herself.

But De La Fuente, whom for years could not hide his intense hostility for Brooks and would have loved nothing more than for her to be roasted publicly for as long as possible, instead completely brushed off Moreno. In the end, Brooks said she had to go to the bathroom and missed the vote, but De La Fuente's actions had even his most ardent supporters scratching their heads. Even San Francisco Chronicle columnist Chip Johnson, whose unflagging public adoration for De La Fuente has lasted for more than a decade, publicly called out the councilman in a column last Friday, saying that De La Fuente's actions, along with several other councilmembers (including Jane Brunner), who made excuses for Brooks, were "cowardly, irresponsible and loathsome."

So what happened? De La Fuente's change of heart toward Brooks appears to have begun as early as two years ago. In the spring of 2010, the two councilmembers, who often had disagreed on matters large and small, found themselves on the same side of a controversial issue. Both openly declared that the city should lay off police officers if the police union refused to pay into its pension plan. In fact, De La Fuente and Brooks became the leading voices for laying off cops, and eventually paved the way for the city to slash eighty police positions.

De La Fuente and Brooks then found more common ground over the past year in their mutual dislike for Mayor Jean Quan. Both have emerged as leading critics of the mayor, especially on her handling of Occupy Oakland. De La Fuente, in particular, has repeatedly harangued Quan for not cracking down more swiftly and more forcefully against the Occupy movement.

And finally there's this: De La Fuente declared last week that he plans to run for mayor if there's a recall election this year. In other words, if he's going to get more than the 30 percent of the vote he received when he ran in 2006, he needs as many supporters as possible — and he needs to turn as many enemies as he can into friends. That's particularly true with Oakland's black community, which traditionally has opposed him. With his unwavering defense of Brooks last week, De La Fuente might have thawed that relationship, too. But will he lose some of his traditional support in the process?

Notwithstanding the Brooks' matter, the Oakland council made the right call last week to move forward with the Coliseum City project, a proposed privately financed development that could provide new homes for the A's, the Raiders, and the Warriors amid a large retail, housing, and entertainment district. Although it's a long shot as to whether Coliseum City will ever get built, the project may represent the only hope Oakland has at keeping its sports teams. Indeed, without Coliseum City, Oakland may lose all three.

For starters, even if Major League Baseball blocks the proposal by Oakland A's co-owners Lew Wolff and John Fisher to move their team to San Jose, the two have made it clear that they don't want to be in Oakland. As such, they might attempt to move the team out of the Bay Area or sell it. Or the league may simply choose to dissolve the A's as a franchise. These scenarios, however, could be made less likely if Oakland can get a private developer to build Coliseum City. A new ballpark for the A's would be a big attraction for anyone interested in buying the team and keeping it in Oakland, and would make the league think twice about contracting the franchise.

The Raiders, meanwhile, look to be a prime candidate for one of the new planned football stadiums in Los Angeles. The National Football League is mulling two stadium proposals in LA — including one at LA Live (the development that Coliseum City is modeled after) — and plans to select one that would house two teams. Since Los Angeles has no teams now, and the league has shown no interest in adding new franchises, then two teams would need to move there. The Raiders are among the teams rumored to be on the list, along with the San Diego Chargers and the St. Louis Rams.

As for the Warriors, they're perhaps the most important of the three pro sports teams in Oakland. In fact, Oakland has proven over the years to be a basketball town. The Warriors have consistently sold out the Arena, even when they've had terrible teams. That hasn't been the case with the A's and Raiders.

But as popular as the Warriors are in Oakland, the team has never returned that love. The franchise still refuses to put Oakland in its name. Moreover, the Warriors seem genuinely interested in the possibility of a new home in San Francisco near AT&T Park. Indeed, if Coliseum City is not built, the Warriors seem destined to go back across the bay. 