Immigration and Customs Enforcement Agents have taken 83 people into custody directly out of Alameda County's two jails in 2018, significantly fewer than in prior years. The decline is mainly due to the passage of SB 54, also known as the California Values Act, or state "sanctuary" law. SB 54, by state Sen. Kevin de León, D-Los Angeles, limits local police and sheriffs from cooperating with ICE, except in very specific cases.

But immigrants' rights advocates continue to criticize Alameda County Sheriff Gregory Ahern for his department's ongoing cooperation with ICE. They say that the sheriff is cooperating in ways that are voluntary, not legally required, and that more can be done to protect immigrants from deportation.

At a public hearing today, presenting information about his department's information sharing with ICE, Ahern told the Alameda County Board of Supervisors that while his deputies don't honor ICE "holds" any longer, they still provide information that helps ICE agents make arrests. This includes posting the release dates of all inmates online. This provides ICE agents, who can identify undocumented people through an FBI fingerprint database that the sheriff's data feeds into, with a means of knowing when people will be released so that they can make an arrest before the person leaves the jail's property.

Ahern also said his department still allows ICE agents into the jail in a non-public, controlled area known as the release section.

"They know the normal wake up time," said Ahern, referring to ICE agents who arrive at the jail as early as 5 a.m. to be ready to arrest people being released from Santa Rita Jail.

He said ICE agents have the same access to the release section's non-public areas as other badged officers from agencies like the Oakland Police Department or the FBI so that they can arrest someone. But whereas OPD or the FBI would make an arrest using a criminal warrant, ICE agents are making arrests on federal civil immigration charges.

Asked where ICE agents go when they’re at the jail seeking to take a person into custody, Ahern says they wait outside, but they’re also allowed into the release area of the jail where people are given back their property and can arrest someone there. pic.twitter.com/YEXRhKETO5


Ahern defended his department's ongoing, if limited, cooperation with ICE. He said the people being handed over to ICE agents have been convicted of violent crimes in the past.

About two dozen people, including undocumented youth activists, immigration attorneys, and religious leaders attended today's hearing also. They strongly objected to the sheriff's ongoing interaction with ICE and told stories about people arrested on non-violent charges who were then taken from the jail into ICE custody. 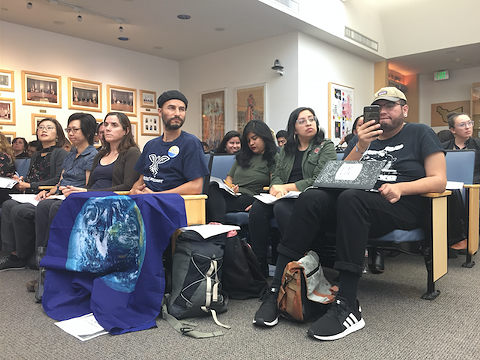 Last April, ACSO began publicly posting inmates' release dates on the internet. Sheriff Ahern said the change was actually the result of a 2012 directive from the Alameda County Board of Supervisors which was intended to help families better know when their loved ones were being released from the jails.

"It had nothing to do with ICE," Ahern said at today's meeting.

But immigrants rights groups feel that the move's timing was suspicious, given the fact that it coincided with the decision by Orange County and other sheriffs departments to do the same thing as a means of subverting the California Values Act. They said the practical effect was to provide ICE with information they wouldn't otherwise be able to obtain.

The board of supervisors discussed possibly reversing the policy of posting inmates release dates online. While this wouldn't end ICE's access to Alameda County jails, it could certainly limit the number of people transferred from the county into the hands of immigration agents even more.

Ahern said the peak of ICE access into his department's jails was during the Obama administration when the Security Communities Program was in effect and there were very few limits on how local police could communicate with ICE.

According to Ahern, when the Secure Communities program was in effect, ICE agents would arrive at Santa Rita Jail at 5 a.m. and go through arrest records in person to pick out people they suspected of being undocumented immigrants.

Grisel Ruiz, a staff attorney at the Immigrant Legal Resource Center, who presented to the board of supervisors at today's forum said that in 2014, with passage of the TRUST Act by state lawmakers, ICE's access to California jails began to decline. The TRUST Act limited the cases in which a person could be placed under an ICE "hold," an extra amount of time after a person's normal release date from a jail that gave immigration agents a chance to come and arrest them.

Ahern said that since the TRUTH Act passed, Alameda County jails have stopped receiving these types of requests from ICE. "The one time ICE did," Ahern said about the submission of an interview request, "that person declined."

In 2017, according to information presented by the sheriff at today's meeting, there were 966 "incidents of access," in which sheriffs deputies responded to a request from ICE for a person's release date and time. This resulted in 386 people being taken into ICE custody out of Alameda County jails.

"They used to be at our jails everyday," Ahern said about ICE. "Now, maybe twice a month."
Prev
Next