And OPD assigns investigators to enforce the new policy.

On Sunday night in Oakland, several hundred demonstrators marched again in defiance of Mayor Libby Schaaf's ban on nighttime street protests. It marked the second rally in open defiance of the ban since a demonstration on Thursday evening was forced off the streets by an overwhelming police presence.

Organized by an interfaith group of spiritual leaders, the demonstrators gathered in Frank Ogawa Plaza at 8 pm on Sunday evening.

“The mayor wants to use broad brush strokes to paint anyone protesting after dark as people who want to do what they call 'violence,' by smashing windows,” said Katie Loncke, one of the organizers.

Rabbi Lynn Gottlieb told the gathering that Schaaf's ban “shows a lack of imagination,” and that “we will protest any time we feel like it, day or night.”

The demonstrators, some of them meditating and praying, walked into the intersection of 14th and Broadway at 9 p.m. intending to march. Lieutenant Nishant Joshi told the Express that OPD would respond to the demonstration no differently than it did with the marches on Thursday and Saturday nights.

At 11th Street and Broadway, the police began issuing warnings through an amplified sound system, stating that any illegal acts would not be tolerated. The demonstrators, some of them carrying candles, arms linked, walked calmly to the police station where OPD had established a scrimmage line to prevent them from going into the Jack London district.

OPD Officer Johnna Watson told the Express that the march on Saturday night, which resulted in 47 citations and 5 arrests, was stopped and ordered to disperse in the Jack London district because that area is a place at which the city has decided to enforce time, place, and manner restrictions on First Amendment activities. 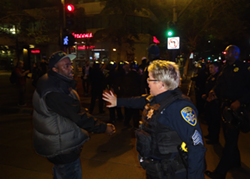 “There are specific reasons we don't want marches to go into Jack London Square,” said Watson. “There's been lots of damage in past marches, broken windows.”

The march then returned to Frank Ogawa Plaza and most of the demonstrators left. At about 10 p.m., a smaller group of young Black, queer and trans activists then led a second short march west on 14th Street, north on Clay Street to the intersection of 16th Street, and then back through Frank Ogawa Plaza.

Again, there were no acts of vandalism or other crimes.

However, OPD informed the small group that Frank Ogawa Plaza was closed and they would be cited for trespassing if they did not leave. Back at 14th and Broadway, a small group of demonstrators chose to take over the intersection for about ten minutes before OPD forced them onto the sidewalks.

At that point the police response to the demonstration transformed into an aggressive kind of crossing guard duty in which rules, including whether or not people were allowed to cross the intersection on green lights, and whether people were standing on the sidewalk, or in the street, were enforced at the threat of arrest.

OPD made multiple strong-arm arrests while enforcing what appeared to be laws against crossing the street on a red light, or lingering too long in a crosswalk, even when the pedestrian light was still green. The police also arrested demonstrators who were standing on the sidewalks. Police did not say why those persons were arrested.

While documenting one arrest and attempting to obtain the name of the person being arrested, I was warned by Officer Eriberto Perez-Angeles that I would be arrested unless I complied with his order to stand on the sidewalk. I informed Officer Perez-Angeles that I was a member of the media documenting an arrest and not interfering with the police. “Get on the sidewalk,” he responded. “This is your last warning.”

On Saturday night, during the physical detainment and arrest of fifty demonstrators in the Jack London district, many OPD officers either did not wear, or did not activate their body cameras, in apparent violation of the department policy.

At last night's march, OPD sergeants could be seen reminding officers to activate their cameras. Even so, it was apparent again that numerous officers were not wearing, or at times did not activate their body cameras, even during arrests of demonstrators who failed to heed orders such as getting on the sidewalk, or not lingering in crosswalks.

It was also apparent that in order to enforce the new ban on nighttime street protests, OPD has assigned officers from the Criminal Investigation Division and other non-patrol divisions. Officer Martin Ziebarth, assigned to OPD's Youth and School Service Division, was on the front lines last night. He was not wearing a body camera. When I asked him why, he said his unit is not normally assigned body cameras, and that the department doesn't have enough of them.

“Normally, I investigate human trafficking, but tonight I'm out here doing this,” said Ziebarth, just after a protester had been dragged off the sidewalk and placed in a police van.

On Saturday night, Officer Nicholas Calonge could be seen detaining a protester and searching her bag. Calonge's normal assignment is investigating homicides.