How to Have an Epic Cannabis Summer

Tour a Mendocino winery and weed farm, kick back at a private Barcelona hash bar, or visit your local nursery.

Now that cannabis is legal in California and many other locales, expect the 2018 summer travel season to be a game-changer.

From our own backyard to the far corners of the globe, there are legit, legal weed experiences to be had. In addition to California, Colorado, Oregon, Washington, Alaska, Nevada, Massachusetts, and Maine, plus Washington, D.C., have legalized marijuana — along with Uruguay and, soon, Canada. Also weed-friendly are Spain and Jamaica, said Sean Roby, founder and CEO of BudandBreakfast.com — which is like AirBnB, but for potheads.

Conventional tourism outlets aren't yet embracing marijuana, which is still illegal at the federal level, so websites like BudandBreakfast.com have sprung up to serve ganja adventurers. The three-year-old website now boasts more than 1,000 listings, with 15 new listings each day, Roby said. There's $20-per-night hostels in Uruguay all the way to opulent, $3,000-per-night cabins in Steamboat Springs, Colo. — paired, of course, with private infused dinners and dispensary tours.

Here are our recommendations for the best local and international cannabis tourism experiences.

Explore the Town and beyond with the bevy of tours, workshops, recreational stores, and lounges that has sprung up with Proposition 64's commercial sales launch this year.

On this side of the bay, branch out from First Friday nights with one of the weekly Puff, Pass, and Paint (or Pottery, or Pastry) classes on Mandela Parkway (PuffPassandPaint.com, $39+). And on June 30, track down festivities for the unlicensed Oakland Cup cannabis competition (TheOaklandCup.com).

California is a country unto itself, as evinced by the millions of in-state tourism visits. Some say we're actually three separate countries. Here in our republic of NorCal, there's an explosion of cannabis tourism options like never before. You could spend a lifetime exploring north of the Golden Gate Bridge to the Oregon state line.

About two hours north of Oakland, you can stock up on carbon-neutral, local, heirloom seeds at Hopland's Emerald Pharms dispensary (EmeraldPharms.com) powered by the adjacent Solar Living Center. If you want to camp irie, follow the lodestar to the Northern Nights festival (NorthernNights.org, $169+), July 20-22 at Cooks Valley Campground, on the border between Mendocino and Humboldt counties. New recreational dispensaries are adding to the already immense allure of weekend getaways exploring Gualala, Mendocino, Ft. Bragg, Ukiah, Garberville, and yes, Weed.

To the south, Santa Cruz has emerged as one of the best legal weed cities in the world, with a slate of licensed retail outlets and the surf culture to go it with. New stores are also open in Carmel and Big Sur for the first time.

In the republic of Southern California, you can hit the Venice Beach Boardwalk's grungy Green Goddess recreational shop for the authentic L.A. experience. Designer flower purists will want to make a pilgrimage to Buds & Roses (BudsandRosesLA.com) in Studio City. Also worth the traffic is a visit to leading SoCal lounge Hitman Coffeeshop (HitmanCoffeeshop.com) in Hollywood. The team behind Hitman brings the world-class Chalice Festival (ChaliceCalifornia.com, $105+) of hash back to the searing San Bernardino County Fairgrounds in Victorville, July 13-15.

To the east, the Lake Tahoe/Reno area is positively going off with recreational stores, including BPG-affiliate NuLeaf (NuLeafTahoe.com) in Incline Village and Tahoe Wellness (TahoeWellnessCoop.org) on the South side. BudandBreakfast has a wide range of Tahoe listings, from party cabins to funky, psychedelic camper trailers.

In 2018, America's stoner travel destinations include Denver, Boulder, Seattle, and Portland, with an honorable mention for the newly legal Las Vegas. The first four destinations really blossom in the summer, combining thriving, urban weed scenes, delicious eats, and majestic outdoor gorgeousness. Roby said much of cannabis travel is music- or food-related, like Denver's Reggae on the Rocks, Aug. 25-26 (RedRocksOnline.com), and Bonnaroo, (Bonnaroo.com) June 7-10 in Manchester, Tenn.

For something more low-key, the Ganja Goddess Getaway (July 13-15, GanjaGoddessGetaway.com, $210) — which will be held outside of California for the first time this year, in Lake Selmac, Or. — combines yoga, fine dining, talks, and herb specifically for women.

Looking abroad, Canada is on the cusp of federal recreational legalization. The politics are just catching up with the culture in places like Montreal, the hottest spot for Canadian cannabis visits, with its reputation for British Columbia "BC" bud.

The Caribbean island nation of Jamaica is "very hot right now," Roby said. Bob Marley's home turf has legalized medical marijuana and decriminalized recreational. Roby said you can tour a 50-acre cannabis farm. "It's pretty much legal. I got off the plane and outside the airport people with baskets of colas are offering it. You just buy a branch. It's at that point."

In Europe, Spain's maverick capital of Barcelona boasts a thriving scene with hundreds of cannabis clubs. And over in the South America, Uruguay has put itself on the map with full federal legalization. These historic new freedoms aren't going to exercise themselves, so get out there, do your part, and have some fun this summer. 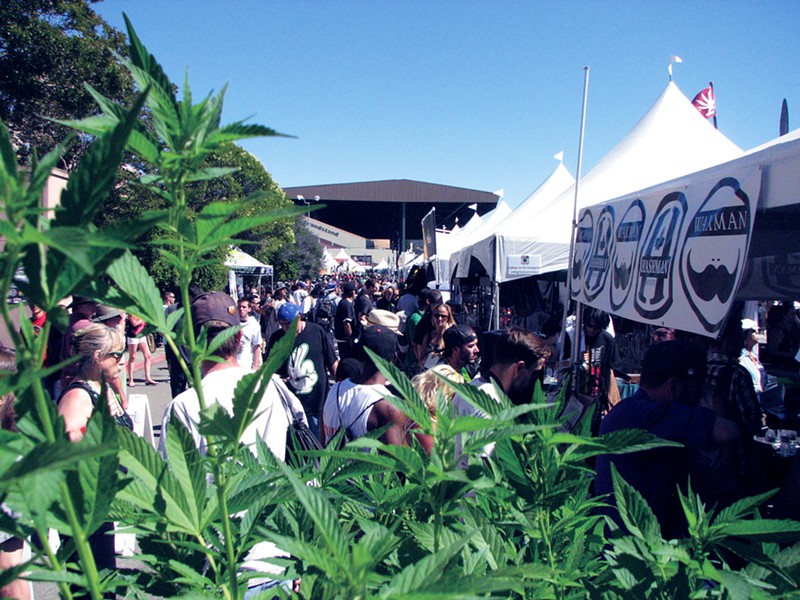 Just because cannabis is legal in California and adjacent states doesn't mean you can travel across the border with it — and you definitely can't fly with it, even within legal states. (Blame the federal Transportation Security Administration.) In California, if you're riding in a car or a boat not specifically licensed for cannabis consumption, be sure to keep your buds in a closed container (unless it's in the trunk of the vehicle). And, sorry, you also aren't allowed to smoke or ingest cannabis in a car, whether you're driving or not.

As for accommodations, hotels don't allow any kind of smoking indoors, but some may permit puffing on hotel grounds or vaping inside rooms. For a cannabis-friendly hotel or bed and breakfast on the West Coast, go to KushTourism.com and click on "Lodging."

And remember: Consumption isn't allowed in any public space.