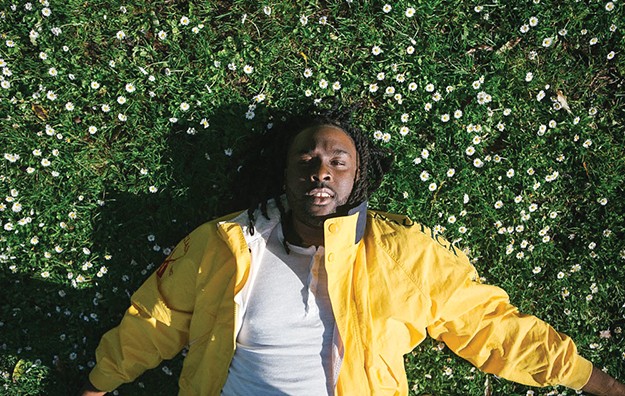 Faraji Wright, who goes by the stage name Rexx Life Raj, has just arrived in New York City. He's taking a much-needed day off before the release of his second album, Father Figure 2, getting ready for a string of interviews as well as a show at Vassar College. His biggest problem seems to be finding a place to eat, a concern he solves like only a tourist to Manhattan would: "Send New York Food Recommendations," he tweets, prompting responses from fans and friends.

"I just flew in this morning," said the 28-year-old Berkeley rapper, his voice low and soft, just like he sounds on record. It wasn't long ago that he started his days in a parcel truck instead of on a transcontinental flight. Less than a year ago, in between recording at his Berkeley studio, Wright paid the bills by driving for his parents' Vallejo-based delivery company. While he drove around the East Bay, dropping off packages at local businesses like Clif Bar and Lawrence Berkeley National Laboratory, he worked on his songs, trying out new lyrics and practicing his flow. "I think that's why I have so much music, because a lot of times, I'd be sitting in the car, writing music and thinking about music, or working on music," said Wright.

Father Figure 2, which came out on Nov. 17 on Empire Records, follows almost 20 years of musical ambition, which Wright said started back in elementary school. Some of his first influences came from the church he attended in Berkeley. "When I was growing up, I didn't think I could sing, because they could really sing," Wright said about his family members. "That's probably why I started rapping."

By middle school, he was recording his own music, making beats with a Casio keyboard and capturing vocals with a karaoke machine. Some of his first mixtapes lived on burned CDs, which he would take with him to school. "I'd try to sell them, but most people wouldn't buy them, so I just ended up giving them away," said Wright. In high school, he recorded demos with his computer and a Radio Shack mic and released them on MySpace.

Had it not been for his size and athletic potential — at his biggest, he was 6-foot-3 and pushing 300 pounds — he might have devoted his life to music sooner. But when Boise State University gave him a football scholarship as an offensive lineman, he put music on the backburner. "I was getting looked at because I was big and athletic and I got the scholarship offer, so I was like, I gotta go," said Wright. "It was big to me, but it was even bigger to my parents, especially my dad, so I was like, I gotta go do this for them."


Still, he continued to record in his dorm room between practices, and after he graduated he stopped playing football. "I never aspired to go to the NFL because it wasn't my passion," said Wright. So, he moved back to the Bay Area to work for his parents and focus on his music. Though his early releases, like 2014's Portraits and 2015's the Escape, proved he was a competent rapper, his songs somewhat lacked in originality, his cadences and lyrics sounding like an amalgamation of other rappers (especially Drake). But on his next couple releases, culminating in 2016's Father Figure, the rapper started to develop a unique voice by focusing his lyrics inward. On "Moxie Java," Wright showed his knack for creating hits out of stark imagery, rapping I think I might have a fucking problem/crushing Adderall in moxie java, sounding both catchy and earnest at the same time.

And on his new album, Father Figure 2, Wright seems to have finally found his voice. He isn't nihilistic like Future (though he does share his love for Adderall), and he doesn't mumble through his lyrics like Lil Uzi Vert or soak his voice in Auto-Tune like Lil Yachty. He is a smooth and technical rapper, as in debt to his blue-collar upbringing as he is to polished hip-hop crooners like Ty Dolla Sign and Drake. "This one is more focused on growth and flourishing, me trying to reach whatever this potential is that I know is in me," said Wright.

He still works for his parents when he can. But now, when he's home from tour — or from press runs in New York — he helps out his parents for free. "Luckily, now I'm in a position where music pays me enough where I don't have to have them pay me," Wright said. "I can work just for working, save them money for whatever they need."