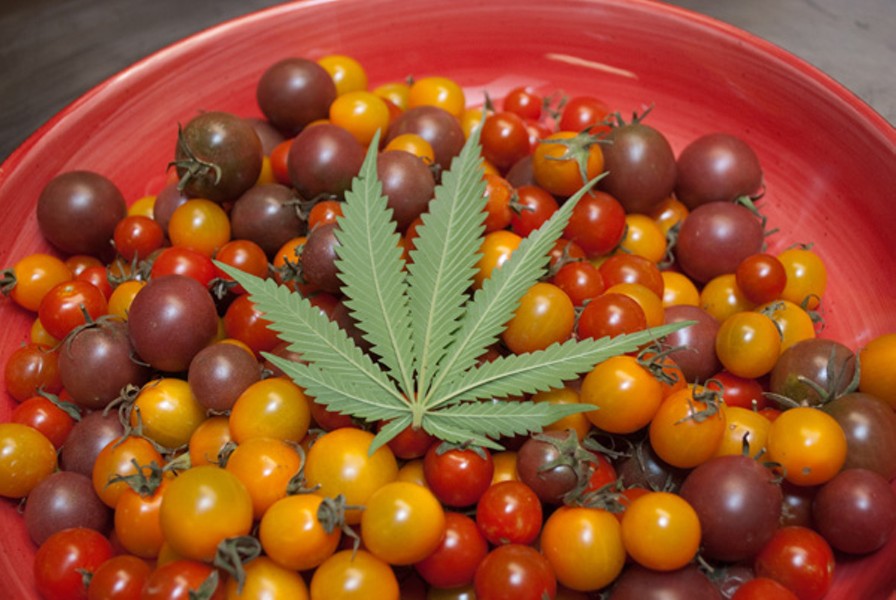 The defiant, distorted twang of Steppenwolf's 1968 hit "Born To Be Wild" blares from the truck belonging to marijuana grower "Kim." His radio is tuned to 91.1-FM KMUD in southern Humboldt County, as he drives past steep gorges and through dark groves of redwoods. Like a true nature child/We were born/Born to be wild ...

Five hours north of San Francisco, up Highway 101, nature truly rules. Geology has reduced the mighty six-lane freeway to a two-lane, landslide-prone country road. Off the highway and off the grid, miles and miles up country roads whose names cannot be disclosed, mountain lion and female deer run through Kim's front yard.

"Hey!" yells Kim, spying a couple of big, healthy does.

The deer linger in the shade of a large tree. Next to it is Kim's three-room bachelor shack.

His truck rumbles past some solar panels and he parks next to what looks like a cell-tower receiver nailed to a tree. The radio array provides Internet access, he says, as he hops out of the truck, leaving it unlocked. He ascends the steep hillside in big strides. The deer crest the ridge ahead of him. "I wouldn't be surprised if their lips are covered with strawberry juice," he laughs.

Further up the hill, in the blazing, eighty-degree sun, an acre-sized patch of artichokes, flowers, berries, and tomatoes contains some interesting guests — about thirty pot plants. They stretch skyward, leaves fanned wide in the bright heat. Each deep-green, seven-pointed leaf is its own solar panel, and it's fueling the production of medical-grade Granddaddy Durkle, Purple Chiesel, and something called Sour Tsunami. "You'll run across that name in a few years," Kim assures.

Rooted in big holes in the ground or in soil boxes, Kim's plants stand waist-high on this June day, but come harvest in late September, they'll be taller than he is and will spread up to ten feet in diameter. Each plant yields anywhere from one to fifteen pounds of high-grade marijuana, with the average being two and a half. Each pound goes for upwards of $2,000.

Deer will eat marijuana, Kim says, not necessarily to get high, but because in the fall, it's among the only watered, leafy green vegetation around. Uphill, a year-round spring provides drinking water, sanitation, irrigation, and a bit of hydroelectric power. "See the ash tree up there," Kim points to the horizon of the verdant wilderness. "An ash tree that size means water year-round for at least the last twenty years."

Kim's kids are all grown up, and he's been in the hills for nine years now. The grandson of an Idaho farmer, he kneels down in his dusty blue jeans and work boots and investigates the base of a plant for bite marks. He thumbs the leaves, looking for signs of malnutrition, mice, voles, gophers. He digs his fingers into the soil and checks its moisture, fills his hands with dirt and brings it into the light. The clay clods crumble through his caked fingers. "You aren't going to get any better dirt," he says.

Up here, the only sounds are birdsong and the wind rustling through the grass. Noticing the breeze, Kim fetches some long, thin sticks and drives them into the soil at an angle. The sticks help the plants support themselves in the wind. Later, Kim'll stake the outlying branches down, quadrupling the final width of the plant.

Set against the priceless backdrop of the Humboldt hills, this serene garden tended by an aging hippie seems like an iconic, timeless scene — one that many people might imagine is what typical pot-growing looks like. But the reality couldn't be more different.

Northern California's highly advanced medical marijuana market is dominated not by hippie-grown, outdoor, sustainable marijuana, but by fossil-fueled and nuke-powered indoor weed. The medical stuff is just a small fraction of the recreational market, but, in total, indoor pot consumes an estimated 8 percent of all electricity generated in California and 1 percent of all electricity generated in America. Its greenhouse emissions equal that of six million cars. Growing just one joint indoors emits two pounds of CO2.

Indeed, marijuana, once synonymous with all that is green, has become anything but in the region that gave birth to the environmental movement. Residents in the liberal Bay Area routinely elbow past each other to buy cage-free eggs, free-range beef, and organic strawberries, and yet their weed habit costs a Fukushima's-worth of power every year.

Why? Because medical cannabis users seem to prefer the high they get from indoor-grown pot, not to mention the way it looks, smells, and tastes — even if it's helping to destroy the planet.

But the Tea House Collective, a group of growers including Kim and about two dozen other hippies and their families in southern Humboldt County, is trying to reconnect the medical pot world to the green movement. With offices in Berkeley, the collective has embarked on a farm-to-door delivery service throughout Northern California. The angle: nurture a niche for sustainably farmed, solar-powered, organically grown, high-potency, outdoor medical cannabis.

The only question is whether they'll succeed in marketing and selling off-the-grid marijuana, grown the way it used to be.

"It's not rocket science," says Kim, twisting up a fatty. "But we do have really good weed."

Whirrrrrrrrrrrrrrrrrr ... The roar of the air conditioning and fans inside this pitch-black, Marin County grow room is constant — 24 hours a day, seven days a week. Even though it's a baking-hot, dry, 85-degree day outside, the air inside the growop is comfortably warm and slightly humid.