How Did Kayla Moore Die?

Copwatch's Andrea Pritchett speaks to press in front of the Berkeley Police Department on February 28.

“She made friends easily, she was very charismatic,” said Elysse Paige-Moore of her stepdaughter, Kayla Moore. “It was typical for her to call here five or six times a day, and talk with us. We cared for her dearly. We have no retirement money because we just did what we could for our child. And she loved us.”

Paige-Moore was understandably devastated when she heard that Moore, who was transgender and paranoid schizophrenic, died in Berkeley Police custody in her home on the night of February 12. How she died is still a mystery. “We understand the community’s concern over this incident, and the desire to have as much information about this incident as possible,” but “a thorough investigation takes time,” said Berkeley Police’s Public Information Officer, Jennifer Coats, via email in late February. 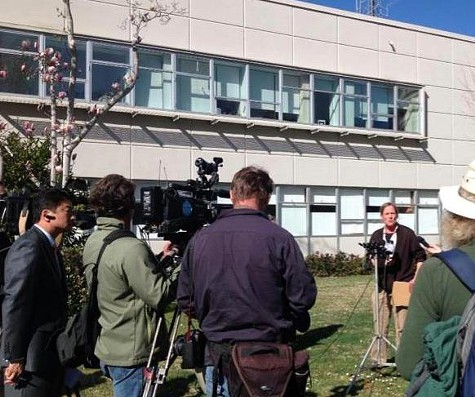 It was around 11 p.m. on February 12 when police arrived at Moore’s downtown Berkeley apartment to handle a mental health-related disturbance. This first visit was fairly quiet. When the cops left, Moore was still alive in her home.

But then the police returned an hour later, this time with more officers, for what would be the last, apparently terrifying, human interaction of Moore’s life. Neighbors at the Allston Way apartment building would later report hearing Moore screaming for several minutes, then an abrupt silence that signaled her death. While we don’t know if police were at fault, we do know that, in general, police have a poor reputation when it comes to dealing with people who are transgender and/or disabled. (Though there are countless statistics that show this, here are a couple recent revealing ones: An investigation by two Maine newspapers published in December 2012 found that at least half of the people killed by police in the US each year are mentally disabled; the latest National Transgender Discrimination Survey found that 29 percent of transgender people said they had been verbally harassed by cops.)

According to the Oakland Tribune, police "originally were going to take [Moore] to Alta Bates hospital in Berkeley for a psychiatric evaluation, but then they discovered an outstanding warrant for assault from San Francisco." These officers, whose names have not been released, made a fateful decision: to arrest someone who was known by the department to be paranoid schizophrenic, while she was apparently experiencing a psychiatric emergency. When Moore was told she was going to be arrested, she became combative, police told the Tribune. Almost a month after the fact, we don't know much more about that night in February. The coroner's office still hasn't released a cause of death.

At a community meeting on February 28, Veena Dubal, a member of the Berkeley Police Review Commission who said she was speaking as a member of the community and not on behalf of the commission, spoke about “a lack of transparency” in how the department has managed the situation. Because it has released so little information, a coalition of local organizations (Berkeley Copwatch, Coalition for a Safe Berkeley, and the Amnesty International chapter at UC Berkeley) is in the process of conducting an investigation of their own.

“Bear in mind that she's 347 pounds. It’s hard to imagine, to be honest, that she could pose that giant of a threat to the officers,” said Andrea Pritchett, an organizer with Berkeley Copwatch. Pritchett is particularly concerned about the amount of time the department is taking with its investigation, as she describes what she sees as the cops’ M.O.:

“They circle the wagons, won't let anyone have any information, stall, delay, and hope that public interest dissipates, and that's what we're determined will not happen in this case. It's a sad commentary on the deterioration of police accountability in Berkeley, I think, because Berkeley hasn't been known for these types of incidents, yet they're happening with greater frequency here.”

The Bay Area is celebrated for being the one of the world's most accessible place for people with disabilities. But, as Pritchett said, "There's this larger question of how police just kind of get to assassinate, 'put down', terminate mentally ill people. The interaction between the police department and the mental health department in incidents involving people with psychiatric emergencies is really important." In Moore's case, it seems the mental health part of the equation wasn't there. Mental health emergencies "don't always happen during business hours. This episode, if it was an episode, was happening between eleven and midnight. So does that mean if someone's having a [psychiatric emergency] they're not going to get any kind of services from our city, and so we're just going to let police with guns handle it?"

Media reports have mentioned Moore's drug use, but it’s unclear what role, if any, her drug usage played in her death. “People get confused between drug addiction and mental health issues,” said Paige-Moore. “When you see a drug addict, don’t judge what you don’t know, and understand that if a mentally ill person dies of a drug overdose, or drugs are a contributing factor, don’t make assumptions about their character. They were doing the best they could do.”

Moore’s stepmother and neighbors confirmed that she identified as a woman, although in media reports and Berkeley Police Department press releases and statements about the case, she's referred to as he and him, a marked sign of disrespect to someone who likely had to fight every day to be understood as female. Back in 2001, Berkeley became one of the first cities in the United States to offer transgender sensitivity training to officers, but when something as basic and vital as using the correct language to talk about someone is disregarded, it's a symptom that these trainings have failed.

At a February 28 press conference, the public coalition released this statement:

"The effectiveness of the Police Review Commission has decreased, and police responses to situations have become increasingly violent. The situation for people of color, young people, houseless people and those on the margins has steadily deteriorated in recent years.

Likewise, our ability to bring issues to the attention of the Police Review Commission and to have cases heard fairly has decreased. New regulations that are completely biased against complainants make it almost impossible to sustain complaints against a police officer. We can expect more tragic incidents of this kind if nothing changes.

We believe that an unarmed, obese and schizophrenic woman in her own home should have been responded to by, if anything, mental health professionals, not armed police."

While we don't know how Moore died, we do know that uncountable disabled and transgender people suffer and die in police custody. We do know that in Berkeley, as in most cities, the numbers are against them: the City of Berkeley's budget for 2013 appropriates $58.5 million for the police department, while health services is set to receive less than half of that, of which just a fraction goes to mental health services. We also know that reactive responses from police cost more than proactive health services — both in terms of money and lives.

Calling Moore by her preferred pronoun is the least we can do. What we also must do is reconsider our ideas around what constitutes public safety, or else our government agencies will continue to be implicated in the mistreatment of people like Kayla Moore.

Editor's note: A previous version of this story failed to note that Veena Dubal, a member of the Berkeley Police Review Commission, was speaking as an individual and not on behalf of the commission at the February 28 community meeting. This version has been corrected.