Mike King examines the demise of the Occupy movement’s most dynamic and radical camp.

The beginning of the end for Occupy Oakland wasn’t a street battle with the police, nor was it a poisonous internal split among organizers — though there were plenty of both. According to Mike King, a participant in Occupy Oakland who is now an assistant professor of criminal justice at Bridgewater State University in Massachusetts, the first sign of trouble was a seemingly innocuous permit that several attorney-activists applied for with the City of Oakland.

The permit, which wasn’t approved by the general assembly — the horizontal decision-making body of Occupy Oakland — was to facilitate a “vigil” in Frank H. Ogawa Plaza after the police forcefully raided and removed the Occupy Oakland encampment on two previous occasions.

But according to King, the permit was a consequential departure from a tenet of Occupy Oakland. Up till then, the movement refused to recognize the city as the legitimate authority over public space and the right to congregate. The permit suddenly legitimated the city’s “soft repression” of the movement.

The city deployed this, and other forms of soft power, to demobilize the movement and pit the public at large against the shrinking core of protesters. A discourse of health and safety was effectively used against the occupiers, and a narrative emerged that shutting down the camp was for the good of the activists to avoid injuries and stop crime. Ultimately, the city’s officials, business leaders, police, and mass media were able frame Occupy Oakland as a spiraling destructive “anarchy” opposed to valid forms of symbolic, liberal protest. 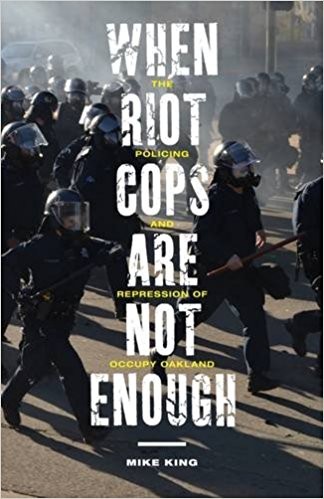 After winning this struggle over meaning, the city was able to crack down again with harder forms of repression. On January 28, 2012 — known to cops and modern-day communards alike as “J28” — a couple thousand shield-wielding anti-authoritarians hoping to take over the shuttered Kaiser Auditorium fought a running street battle with hundreds of riot police who were determined to stop them.

King’s new book, When Riot Cops Are Not Enough: The Policing and Repression of Occupy Oakland, shows how forceful policing as a means of social control failed in Oakland, freeing up the movement to expand and experiment. But the real meat of the book is the lengthy examination of how the city regained its authority and crushed the movement.

Occupy could never have fully recovered in Oakland, and according to King, its tactical and strategic repertoire was exhausted. The movement’s participants retreated into smaller committees, projects, or just went home.

Maybe King’s thesis is wrong? Perhaps the internal splits within Occupy Oakland were too much, and the movement’s toxic personalities and antimatter ideologies (e.g. the “Palestinian Columbian terrorist” smear one clique of organizers attacked one person with; the extremely divisive “occupy” versus “decolonize” debate, etc.) were what really killed the movement.
Maybe all the jail support and endless meetings burned people out.

Or maybe Occupy Oakland failed to reach the proverbial masses — the homeless, formerly incarcerated, evicted and foreclosed, jobless, single moms, fast food workers, and so on. It never became anything more than a clusterfuck of the Bay Area activist left’s usual suspects.

Looking back, Occupy Oakland seems like a strange, wistful dream. tweet this
There’s certainly many ways to explain the demise of Occupy Oakland, but King’s version is useful. He shows in detail how the city (its elected officials, the administration, and police) deployed a mixture of brute force and ideology from day one to undermine the movement.

Initially, riot cops, as King playfully phrases it “weren’t enough.”
In fact, King shows how they were counterproductive. The shooting of Marine Corps vet and activist Scott Olsen in the head with a less-lethal projectile by an Oakland cop on October 25, 2011, was a political disaster for the city. The broader public turned against the mayor, city council, and cops. For a moment, the movement was the only legitimate social formation.

In the space of this brief authority-vacuum, Occupy Oakland shut down the city’s port and carried out numerous smaller actions that influenced the national political debate around inequality, police brutality, and racism.

But where riot cops failed, the softer power of permits, discourse on public health and safety, and rhetorical depictions of the movement as a nihilistic force bent on destruction, succeeded in turning popular opinion away from the occupiers. When the tide shifted, and the movement’s collective imagination failed it, the police were able to deal Occupy its J28 KO blow.

In hindsight, how could anything else have happened?

Oakland rose from the Great Recession and is now experiencing an unprecedented economic boom. And the Bay Area is now the epicenter of a global neoliberal economy being refashioned by the power “tech.” Of course, all the destructive trends decried by Occupy are built into this new economy. Income and wealth inequality have worsened. The foreclosure crisis has morphed into an eviction, rent gouging, and homelessness crisis. Things got worse.

Looking back, Occupy Oakland seems like a strange, wistful dream. Six years ago, did the people really occupy their town squares to break bread with the dispossessed, and talk about radically refashioning the economy and political system from the ground up?

They did, and they mostly lost. And it wasn’t the riot cops who beat them. 