How Balanced Breakfast Is Changing the Bay Area Music Scene

The weekly gathering helps those in the music industry do what they love (and get paid for it). 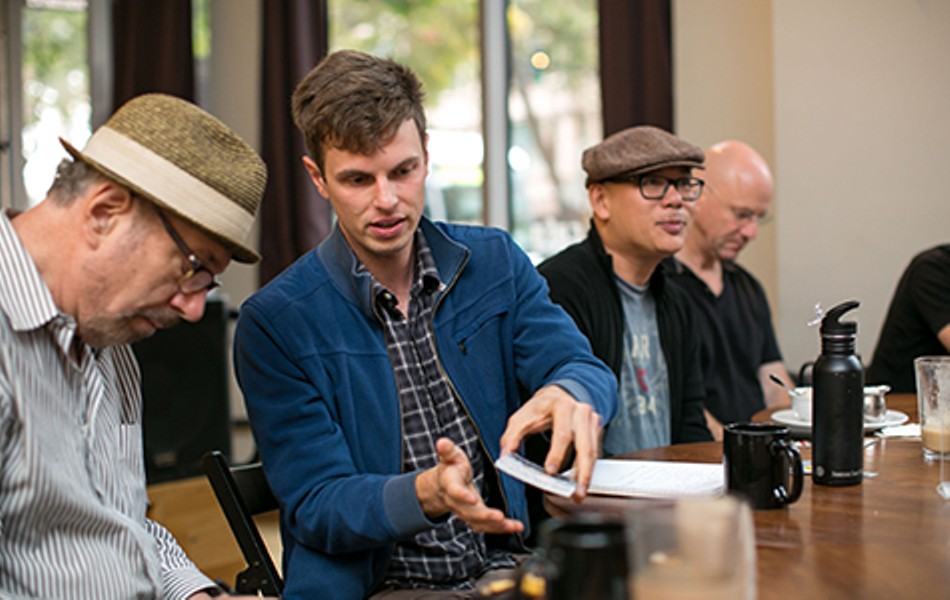 It's 8 a.m. on a Friday, and a group of about twenty musicians has gathered at Awaken Cafe in downtown Oakland. They're not reconvening after an all-night bender, as first glance might suggest. They are part of the East Bay Balanced Breakfast, a weekly get-together for musicians, engineers, band managers, publicists, and other music industry enthusiasts to network, inspire each other, address questions about the local music scene, and learn how to get paid for doing what they love.

Started in San Francisco by Andy Freeman and Stefan Aronsen (the San Francisco contingent meets on Thursdays at The Crepe House), the East Bay Balanced Breakfast, which started last April, is orchestrated by Oakland-based Brian Bergeron, who fronts the local electro-Americana band Mr. Kind, and Piper Payne, a mastering engineer who also runs Giving Stage, a virtual concert venue that raises money for social change. "We talk music industry, but don't just have musicians," said Bergeron. "We've had industry folks in addition to choreographers, video people, and a wide swath of artists."

The theme of the October 10 gathering was (appropriately, as I attended it) focused on the press, publicity, and how to market yourself. "The biggest mistake you can make is to release your album and not have a plan," said D. Edward, a soul singer/songwriter/multi-instrumentalist whose new album Love Is comes out October 21 through 10th & Clay Records. Other issues that were addressed in the two-hour meeting included what musicians and bands should look for in a publicist, resources on how to write a press release, and ideas for how to stand out in a ruthless music market.

In addition to practical matters such as the importance of copyrighting your work — "It's scary how little some people know about copyrights and song credits," said Chang Yi, a DJ, producer, and organizer of the Eastlake Music Festival — Balanced Breakfast attendees also emphasized the importance of collaboration, staying inspired as an artist, and helping each other out.

"We discuss best practices and have talks from bands that have plowed the path," said Aronsen. "But I think what keeps people coming back isn't the advice, but rather the community. Musicians are hungry for camaraderie and a support system, people that understand the struggle and are here to weather the industry with them."

"Ever since I decided to take music seriously, the Balanced Breakfast folks have been there every step of the way," said Suzanne Yada, aka electro-singer-songwriter Little Spiral, whose self-released EP comes out November 4. "They've seen me transition from a web geek who liked to write songs to a recording artist with a stage name and an EP coming out. And each week, it seems like the topics that come up are exactly the things I need in my career."

Already, Balanced Breakfast has proven to be successful enough that it's expanding to other cities, including Boston and LA. "Both LA and Boston are trying to figure out what day and time works best to match their culture," Aronsen said. "Apparently the 8 a.m. thing was a less than popular idea. It is admittedly hard here, too. ... But 8 a.m. is great because it keeps our numbers a little smaller, and people can go to their jobs after breakfast." Aronsen also said that the San Francisco contingent regularly has more than 35 attendees and that its organizers are now looking for a bigger location.

The East Bay Balanced Breakfast took a brief hiatus in September in order to focus on its debut residency showcase — a weekly concert series — at Neck of the Woods in San Francisco, but the group is now back, and raring to help their fellow musicians and industry folks succeed. "The people here know about every aspect of the independent music scene and are always willing to help out," said Yada. "It's what keeps me coming back every week."

The Bay Area is perhaps the perfect incubator of something like Balanced Breakfast, because of its community-minded focus. "Coming from the Boston music scene, San Francisco is much more supportive and collaborative," said Bergeron. "Musicians are happy to help and support other musicians in the scene and play in other bands, and there are so many little pockets of the music scene here that makes it continually more rewarding."

Payne noted the example of Jeff Campbell, who performed on Jimmy Kimmel Live in LA in 2013. "And even though he had big-time LA musicians at his disposal for playing the show, he flew all of his friends that had helped him climb the music industry ladder to come down and play this concert with him. That's what the Bay Area does."

“We aren’t just a breakfast,” as Aronsen put it. “We’re a big group of friends.”