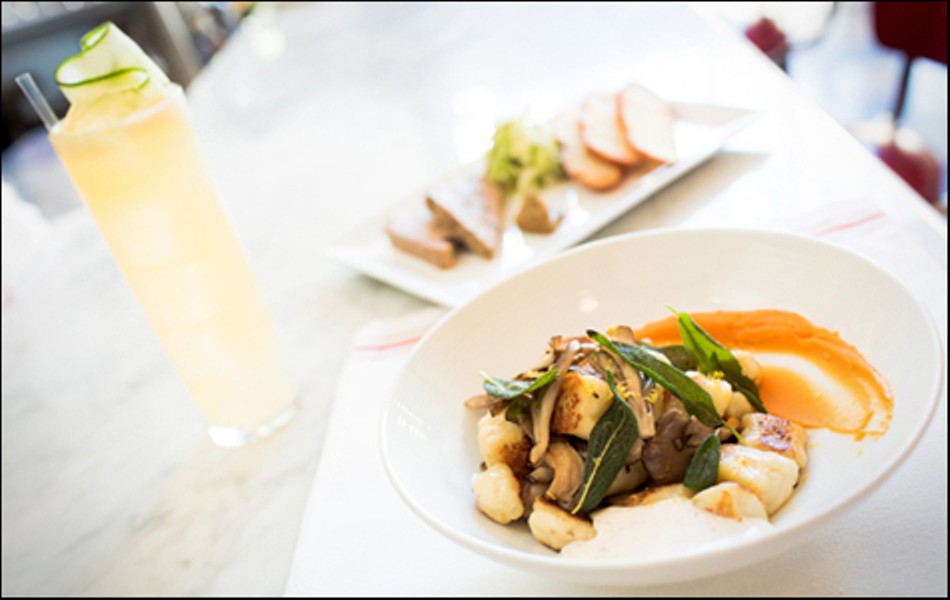 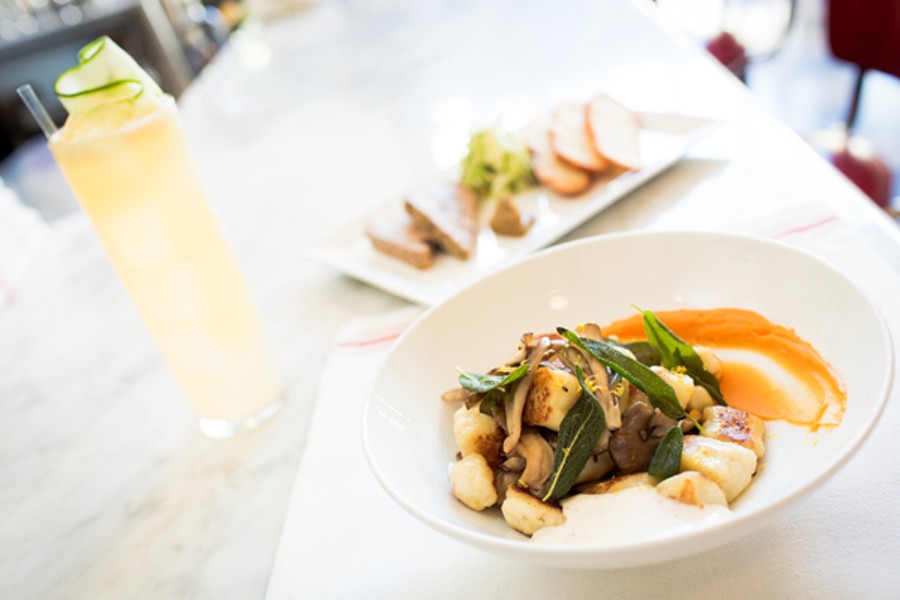 Stephen Loewinsohn The potato gnocchi, made from Japanese yams, was hearty and sweet.

Remember the late Nineties and early Aughts, when Asian fusion cuisine was all the rage — when chefs like Ming Tsai were the culinary toast of the town? All of a sudden it wasn't just the restaurants my parents liked that were serving dumplings and fish cooked in bamboo steamers: Fancy restaurants were cooking fancy versions, and The New York Times was writing it up.

As for Tsai, it didn't escape my notice that the guy shared my surname; that he was this handsome Asian face on American TV every week; that he knew his way around a wok, but also knew the French names of things and had the cultural cache that came along with that.

But these days, savvy American diners tend not to be impressed by the kind of old-school fusion cooking that was popular a decade ago — dishes that incorporate Asian ingredients heavy-handedly: rib-eye steaks with soy-ginger marinade, a side of wasabi mashed potatoes. No one describes their cooking as "East meets West" anymore.

Instead, we're seeing a new generation of young Asian-American chefs who are slinging dishes infused with the flavors that they grew up with: fish sauce and Sriracha and Kewpie mayonnaise, but also salsa verde and cheese grits. The restaurants aren't upscale; they appeal to a younger demographic. When there is some kind of "fusion," it doesn't feel as French — you're more likely to see riffs on burritos and rice bowls than $30 reinterpretations of bouillabaisse.

Call it "Asian soul food," as Nancy Matsumoto put it in a story she wrote for The Atlantic last month, in which she documented the emergence of this "gutsy, high-low mash up of street food and haute cuisine, old country flavors and new-fangled cooking techniques."

In New York, David Chang and his Momofuku empire carry the banner. Here in Oakland, we have James Syhabout at Hawker Fare. These are the folks with whom Kyle Itani, the chef and co-owner of the new Uptown restaurant, Hopscotch, seems to identify.

Itani is half Japanese — a fourth-generation Yonsei who cut his teeth cooking at Yoshi's Oakland, eventually rising to the position of chef de cuisine. When he started thinking about opening his own place, he noticed that first- and second-generation immigrants ran most Japanese dining establishments. So he decided that he wanted to create a restaurant that would speak more to his own experience as a Japanese American.

At first glance, Hopscotch seems like a weird combination of seemingly disparate elements: There's a retro Fifties diner aesthetic, including old-fashioned red bar stools — holdovers from when the place was Chef Edwards Bar-B-Que. There's a scotch-centric bar program. And, of course, there's the Northern California-inflected Asian fusion menu, which doesn't seem especially Asian until you read some of the listed ingredients — the menu is more Wood Tavern than Mission Chinese Food.

Dinner typically starts with a complimentary amuse-bouche that'll give you a sense of what to expect: During one visit the amuse was a single bite of tender-crisp green beans served in a pine-nut-and-tofu purée. Another time it was a small bowl of tempura-fried chickpeas served with a dollop of green wasabi paste — Itani's fresh-out-of-the-fryer take on wasabi peas, the popular Japanese snack.

With the rest of the menu, too, Japanese elements were incorporated with a dash of whimsy, but also with precision and restraint. House-made duck-fat potato chips were served with a tangy yuzu aioli that cut their heaviness. A salad of heirloom tomatoes came with pickled onions and oyster mushrooms, grassy tatsoi leaves, and an umami-rich dashi-based dressing that brought it all together.

A rustic pâté was made with two kinds of liver (pork and veal) and had the mellow sweetness of Korean fermented black garlic. And its accoutrements were pitch-perfect: buttery toasts, spicy whole-grain mustard made with Asahi black beer, and house-made tsukemono — or "Japanese sauerkraut." Prepared with salt in a traditional Japanese pickle press, the cabbage and seaweed 'kraut took on a slightly fermented quality, more like mild kimchi than a vinegary pickle.

My favorite among the entrées was the hearty sweet potato gnocchi. Made from white-fleshed Japanese yams, the gnocchi were nicely pan-fried so that about every other one had wonderfully crisp edges. Underneath, a layer of sweet potato purée added an additional element of sweetness. The rest of the plate was classic fall flavors: fried sage; brown-butter crème fraîche; and incredibly fragrant oyster, shiitake, and Hen of the Woods mushrooms.

Also memorable was the perfectly broiled Arctic char, which was a study in complementary flavors and contrasting textures: not just the crispy skin and silky flesh, but also the creamy aged miso underneath and the accompanying fried squash blossoms, which were stuffed with salted cod.

The only relatively pedestrian item was the First Base Burger, which sounded more exotic than it was. Itani slow-braises whole beef tongues for this dish, then slices them up and griddles the meat on the flat-top — you end up with a few shreds of tender meat on top of the burger itself, but if you aren't paying attention, you won't even notice them. But that's not much of a knock: It's still a solid, well-built burger with a pleasantly chewy coarse-ground patty.

Despite the casual diner setting, the service at Hopscotch — headed up by co-owner Jenny Schwarz — is some of the best and friendliest I've experienced in a while. The servers are knowledgeable about the food and give enthusiastic recommendations, and everyone is just damned friendly.

It's a place where you feel entirely comfortable dining by yourself at the bar — the better to soak in the atmosphere and focus on the interesting food in front of you. It's a place, I'm sure, from which Ming Tsai himself would draw inspiration.