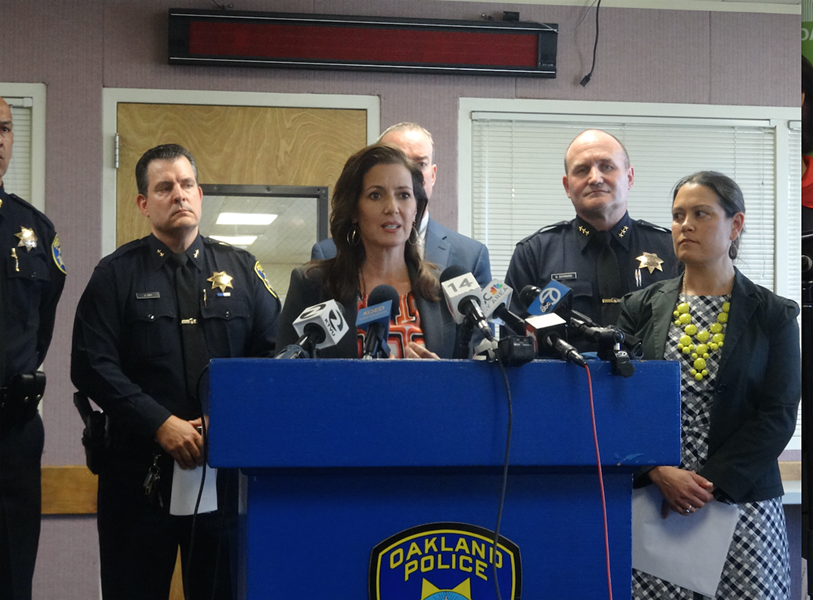 Last year, when news first broke about the Oakland Police Department sex-crime scandal, Mayor Libby Schaaf said she and City Administrator Sabrina Landreth were unaware of potential crimes committed by several cops until March 2016. However, emails obtained by the Express reveal that multiple officials from the City Attorney and Administrator's offices knew detailed information about officer misconduct as early as November 2015 — four months before the mayor says she learned of the case.

On November 16, 2015, OPD civilian employee and union steward Belinda Calvin-Adlao wrote a plea for help in an email to Spruce Metzger, a senior labor relations staffer for the City of Oakland. She requested an “intervention,” and “oversight” from the city, in regards to an internal-affairs investigation of a fellow civilian OPD employee.

The employee in question was the mother of “Celeste Guap,” the teenaged victim in the OPD scandal. Copied on the email was Oakland’s director of employee relations, Renee Mayne, who reported directly to Landreth.
Calvin-Adlao wrote that Guap’s mother was the original subject of OPD’s internal investigation: Someone filed a complaint against her, alleging she failed to report that multiple police officers committed statutory rape against her own daughter.

According to Calvin-Adlao, the mother was innocent and OPD was improperly investigating the woman. However, in the course of reviewing the complaint and interviewing several OPD employees, Calvin-Adlao concluded that the misconducts accusations against the officers were likely true.

“I can tell you that the inappropriate actions in this case are the direct result of police officer misconduct as they took advantage of a troubled minor during the times of the incidents,” she wrote in a letter attached to the email.

Calvin-Adlao explained to the city employees how she traced the origin of the scandal back to Officer Brendan O'Brien, who committed suicide in September 2015 and left a note naming fellow officers accused of sexual misconduct.

Also copied on the November 2015 email was the leadership of Calvin-Adlao’s union, SEIU Local 1021, Edward Swanson, an attorney who has periodically been retained by U.S. District Court Judge Thelton Henderson to investigate matters related to OPD's 14-year consent decree, and also Sokhom Mao, the chair of Oakland’s Citizens Police Review Board at the time.

Metzger left the City of Oakland in December 2016, and now works for the King County Metro Transit agency in Washington State.

Mayne left her job with the city in August 2016, and now works as an independent labor arbitrator. She told the Express that she did not recall Calvin-Adlao's email. “If it was a serious matter, I would have reported it to Sabrina [Landreth] or Christine [Daniel],” Mayne said, the latter referring to one of Landreth's assistants.

In separate emails sent later, in November and in early December 2015, Calvin-Adlao also corresponded with Deputy City Attorney Allyson Cook about the investigation.

On December 1, 2015, Cook replied that she had passed the message on to the city administrator's office. “I wanted you to know that once I received your email, I provided it to Risk Management, who, in turn, will make any appropriate notifications.” Among other things, the city’s risk-management division handles employee health and welfare and is under Landreth’s oversight.

In December 2015, Guap's mother was absolved of any wrongdoing, and the focus of the investigation shifted to the officers named in O'Brien's suicide note, according to sources close to OPD. But the allegations against the police officers remained buried until early May, when whistleblowers began talking to journalists.

As the Express previously reported, the police department and other city officials never notified the District Attorney’s Office about the potential misconduct of several officers, despite being required to under the terms of the department’s federal court oversight.

This summer, Schaaf told KQED that she “learned about [the officers under investigation for misconduct] in March from the city administrator, Sabrina Landreth.”

In emailed statements sent this week, both Schaaf and Landreth reaffirmed earlier remarks that they first became aware of the scandal in March of last year.