There was a time when the division between mainstream dailies and alt weekly papers seemed as sacrosanct as the separation of church and state. So thought Tim Redmond, editor and publisher of the San Francisco Bay Guardian, which bucked that old notion in May when it merged with The San Francisco Examiner. Now that the two papers are comfortably sharing office space — but not editorial content — in San Francisco's financial district, Redmond admits the transition went even more smoothly than he'd anticipated. 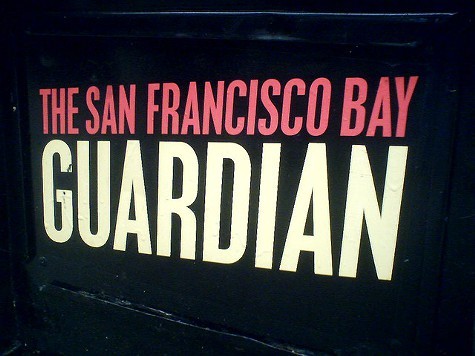 Redmond said that after twenty-five years in a quickly declining industry, he's ready to abandon the notion that "we're the weeklies, and they're the dailies, and never the twins shall meet." "These days, there's this feeling in the newspaper business that we're all in this together," he said, adding that Examiner publisher Todd Vogt stuck to his promise of not interfering with Guardian editorial content, even though the two papers have streamlined their distribution systems and made a few synergies in advertising. "It's very limited at this point because we're very cautious about it," Redmond said. Overall, he's pleased — the Guardian managed to move from a building it owned in Portrero Hill to the Examiner's office on Stevenson Street in a matter of weeks. In the interim, Bruce Brugmann and Jean Dibble stepped down as publishers of the paper, passing the baton on to Redmond.

In the end, the sale was a deus ex machina for an endangered, money-losing paper. Had Vogt not stepped in, Redmond said, the Guardian's prognosis would have been grim. "The Guardian had a fair amount of debt, and Bruce and Jean were ready to step down," he explained. "I'm really glad that Todd believes in newspapers and bought us." Redmond admits he's an eternal optimist; nevertheless, he expected the transition to present more challenges than it has so far. He said that ultimately, it's come off really well and the two papers will continue to operate closely but separately.