Despite a promising start, the hybrid market-restaurant Grand Fare's future is in question. Plus, a new pop-up launches in Temescal.

On Saturday morning, I was all set to file a mostly glowing review of Grand Fare Market (3265 Grand Ave.), the sparkling-new hybrid prepared foods market and restaurant in Oakland's Grand Lake neighborhood, when my phone started buzzing. People on Twitter were asking if I knew why, after having been open just six weeks, Grand Fare had suddenly gone dark, with no explanation other than a sign in the window saying the business would be "closed until further notice."

It was a surprise to me, too. Just a few days earlier, I'd spoken to co-owner Doug Washington and chef Ben Coe, and both men were upbeat about Grand Fare's successes and sanguine about its challenges. But on Saturday, Washington told me via text message, "We needed to shut down to figure out what changes to make to Grand Fare before moving on." When pressed to give a timetable for when some new incarnation of the business might reopen, he said it would be at least eight weeks. Later, in an interview with Inside Scoop, Washington was even more ambivalent. When asked if Grand Fare would even reopen at all, he said, "We plan to spend some time figuring that out." 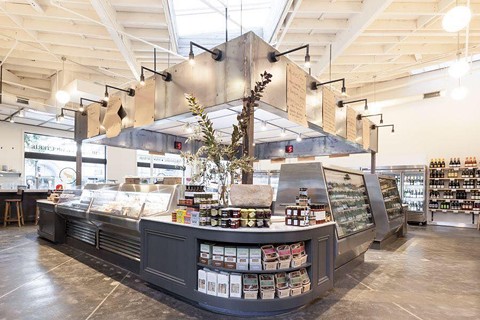 All in all, it was a stunningly fast rise and fall for what had been one of Oakland's most highly anticipated, and most ambitious, new restaurants. In truth, it seems inaccurate to even label Grand Fare as a "restaurant," strictly, because it also combined elements of a grocery store, deli coffee shop, bakery, beer garden, and ice cream truck — all of that in a lavishly-appointed 3,500-square-foot indoor and outdoor space. And much of it was wonderful in its way. The indoor portion had the look and feel of the kind of luxury grocery store I associate with the ritzy parts of cities like Paris or Tokyo. There were gleaming cases filled with wonderful cheeses, charcuterie, and to-go items such as duck confit and stuffed portabella mushrooms. A carefully curated selection of snacks made by local food artisans was arranged just so. Chipper employees offered samples of the hearty, unusual house-made grain salads that the shop sold by the pound — quaintly, in South Asian-style metal tiffin boxes, for customers who chose to eat in the garden courtyard. And what a garden it was: Tree-lined and lit up with twinkly string lights, so that even on a random weeknight, I felt like I'd walked in on a festive backyard wedding party. A vintage Airstream trailer served pastries in the morning and Humphry Slocombe ice cream in the afternoon and night.

But there were cracks in Grand Fare's well-polished armor, if you were inclined to look for them. The garden, as beautiful as it was, didn't have a roof, and, apart from a small raw bar inside, it comprised the entirety of the restaurant's available seating. Business seemed destined to take a hit on cold, rainy days. And the difficulty of finding street parking on that stretch of Grand Avenue likely didn't bode well for a takeout-oriented business.

Still, when I spoke to Washington last week, he talked only of minor tweaks that were in the works — of his desire to simplify the ordering process and to more prominently display the whole rotisserie chickens and other hot entrées. The goal, he said, was to create a feeling of abundance. "You shouldn't have to stand at the center island and choose like you're at a restaurant," he said.

In the end, it seems that basic finances were what did Grand Fare in. In a Facebook post, Washington and co-owner (and wife) Freya Prowe wrote, "The market's current incarnation simply required too much cost to keep up basic operations, and we couldn't keep it going."

What was never in question were the chef's cooking chops. Coe's previous gigs were at Commis and the now-shuttered Box & Bells — both high-profile restaurants owned by James Syhabout — and that pedigree showed here, even in seemingly simple dishes. An array of flatbreads were topped variously with thinly sliced lamb and chimichurri — like a suped-up roast beef sandwich — or big chunks of yogurt-sauced Louisiana shrimp so plump and luxurious I nearly mistook them for lobster. Meaty, tandoori-spiced pork ribs were cooked sous-vide, in a temperature-controlled water bath, then finished on the grill. They had just the right texture and were flavorful enough that no sauce was needed. A spinach salad that featured spit-roasted Piri-Piri chicken was as good a chicken salad as I can recall eating this year.

Here's to hoping Coe lands on his feet. But whatever the future holds for the talented chef, it seems unlikely that it will be at Grand Fare, even if Washington does resurrect the concept a few months from now. When reached by phone on Monday, Coe said he didn't have any more information about the decision to shutter the restaurant than I did. A phone call late Friday night was the only notice he got. "For one reason or another, that's it," he said.

They call themselves "journeymen," a term meant to evoke the old European tradition of craftsmen wandering from town to town in order to build up their skills — or, for baseball fans, the utility infielder who's been around the block a few times.

Even though chefs Jonathan Tu and Chris Wolff are just 32 and 29 years old, respectively, they say they've both cooked professionally for pretty much their entire adult lives. Now, Tu and Wolff are the proprietors of "Journeymen," a new monthly pop-up dinner at Temescal's Blackwater Station (4901 Telegraph Ave., Oakland) that the two Oakland residents hope will eventually morph into a restaurant of their own.

The next pop-up will be a $55 four-course prix-fixe dinner on Monday, December 7, with seatings at 6:30 p.m. and 8:30 p.m. Dishes will include grilled Hokkaido squid, a nasturtium and burrata soup, dry-aged chuck steak with marrow, and salted persimmon ice cream — plus a couple of snacks to start, bread and butter, and coffee and petit fours at the end. Blackwater Station's full selection of cocktails will also be available.

You can buy tickets via Eventbrite.com (under "Journeymen Oakland").

The basic approach is a modern Californian tasting menu, though Tu said he and Wolff wanted to avoid doing the kind of long-format, twelve- or fifteen-course marathon dinners that you'll find at the highest-end restaurants that serve this type of cuisine — an hour-and-a-half rather than a three-hour-long meal. And the chefs are also less shy about embracing modernist cooking techniques — emulsions and immersion circulators and such — than the more rustic Cal-cuisine that still dominates the East Bay.

"When they invented the stove a long time ago, people who were cooking over a campfire were like, 'What is this new technique? We don't need it,'" Tu quipped.

Still, To said the dish he cited as his favorite from the pop-up menu — the nasturtium and burrata soup — was meant to be comfort food, highlighting the creaminess of the burrata and the pepperiness of the nasturtium. Shallot-like daylily bulbs, foraged from around Lake Merritt, and pumpernickel crackers seasoned like an everything bagel complete the dish. The idea, Tu said, is for every dish to be an explosion of concentrated flavor.

If the last dinner that Tu and Wolff collaborated on — in June, at the Hopscotch Annex in Uptown Oakland — is any indication, the Journeymen pop-up might sell out quickly. At the time, Tu was the sous chef at Rich Table, and Wolff was cooking at Bar Tartine, and the pedigree of those two prominent San Francisco restaurants likely contributed to the enthusiastic turnout.

But according to Tu, what the two really want is to open a restaurant in Oakland. So, in September, they both quit their jobs and took gigs working at restaurants in the East Bay — Wolff at Blackwater Station and Tu at Berkeley's Iyasare. They both work the day shift so that they can concentrate on their pop-up venture and prospective Oakland restaurant at night. "We both agreed this is an easy place to fall in love with," Tu said.