Get Your Drink On At These New East Bay Breweries

If you haven’t tried these recently opened breweries, you’re missing out. 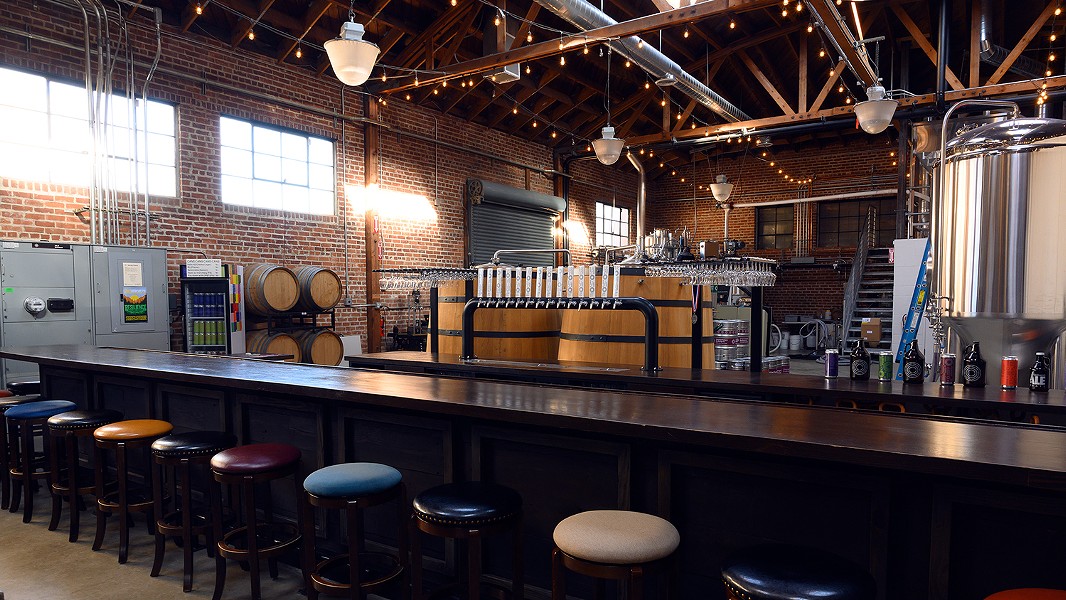 Few things beat relaxing with a locally brewed beer — except drinking it straight from the source. Check out what some of the East Bay’s new brewpubs have to offer (hint: It’s more than just beer).

Oakland
Federation Brewing, 420 Third St.
This Jack London Square brewery was founded by childhood friends Aram Cretan and Matt Hunter, along with Aram’s father, Larry Cretan. The friends met in junior high band, and they eventually developed a mutual interest in brewing, opening Federation Brewing in early 2017. There’s a wide variety of brews here beyond IPAs (though you can get those, too), such as the Behind You! Blonde Pilsner. Or if stouts are more your style, there’s the Low Boy Oatmeal Stout that’s lightly sweet, with toasty notes of coffee, nuts, and barley. Other intriguing brews have included the Butternut Booyah, made with butternut squash; the After Hours Chocolate Stout, brewed with TCHO cocoa nibs; and the Scenic Route Imperial Grapefruit Sour, with notes of grapefruit rind and zest. The brewery also hosts Warriors watch parties, trivia nights, and various food trucks.

Original Pattern Brewing Company, 292 Fourth St.
Original Pattern Brewing Company, which opened in early 2018, is another newcomer to the Jack London district. It’s owned by two married couples, Ryan Frank and Caitlin O’Connor and Max and Margie Silverstein. The brewery has a number of Old World-style beers like kolsch, Czech pilsner, and English brown ale, as well as Belgian-style beers. In fact, the brewery’s Call of the Void Belgian Dubbel won silver place at the 2018 Great American Beer Festival in the Belgian beer category. But you’ll also find nontraditional brews like a tropical sour and a hazy IPA. The brewery also hosts pop-ups from eateries like Good to Eat Dumplings, plus free live jazz on Friday nights, and the occasional beer release party. In fact, there’s a party coming up on Saturday, Feb. 2, celebrating the bottle release of Original Pattern’s barrel-aged Golden Ratio Belgian Tripel, during which customers can purchase bottles and mac ’n’ cheese dumplings from Good to Eat Dumplings.

Ghost Town Brewing, 1960 Adeline St.
Ghost Town Brewing is aptly named after its location in the Ghost Town neighborhood of West Oakland. The brewery was started by four friends who played together in a metal band and homebrewed on the side, but over time, beer became the main focus, and they opened the Ghost Town taproom in mid-2018. Try the Cat Hoarder Porter, a nitro brew made with cocoa nibs and lactose for a creamy, rich flavor. Between beers, pass the time with cornhole, foosball, board games, and pinball machines. There’s also the occasional food pop-up (for instance, 4505 Burgers & BBQ will be selling ribs and brisket by the pound from noon to 7 p.m. on Feb. 3).

Roses’ Taproom, 4930 Telegraph Ave.
Roses’ Taproom, which opened in Temescal in summer 2017, offers a refreshing change from the often industrial-style brewery taprooms — in keeping with its floral name, the brewery is decorated with indoor plants and flowers. The tap list offers selections like a Japanese-style rice lager, a kolsch-style ale, and an oatmeal stout. There are also a few IPAs, plus some beer cocktails like the kimchi michelada. Snack on sophisticated bites like cheese plates, pork rillettes, and olives.

Old Kan, 95 Linden St., Ste. 11
Scramble around the letters in “Oakland,” and you’ve got Old Kan, the brewery that Adam Lamoreaux, formerly of Linden Street Brewing, and James Syhabout of Commis, opened in West Oakland in early 2017. The beers here are refreshingly old-school and accessible, like the Original Standard Pub Ale — a drinkable pale ale-style beer. Guests can also enjoy the outdoor patio, board games, and a menu of elevated bar snacks, salads, burgers, and sandwiches.

Berkeley
Gilman Brewing, 912 Gilman St.
Gilman Brewing is the passion project of Sean Wells and Tim Sellmeyer, two veterinary surgeons. The brewery opened in early 2017 in a former auto shop and has already gained recognition. The “aggressively hopped West Berkeley-style” Autoshop IPA won a silver award at the 2018 New York International Beer Competition. The brewery was also named California Saison Brewery of the Year at the New York International Beer Competition and took home the gold at the same competition for its Maison de Campagne French saison. If you’re a fan of fruity beers, try their Pineapple Jardin, made by adding pineapple purée to a Belgian-style golden sour. Or try the Blackberry Hibou, made with enough blackberries to turn the brew a deep purple hue. Special events include Trivia Tuesdays, monthly car shows, and pop-ups like Ippo Ramen and D.O.G. A permanent menu of charcuterie plates, cheese plates, and panini adds to the charm.

Alameda
Almanac Barrelhouse, Brewery & Taproom, 651B W. Tower Ave.
Alameda Point is quickly becoming a destination for local wineries, distilleries, and breweries, and Almanac Brewing is one of the latest additions to that list. Prior to its opening in early 2018, Almanac had been making its beer in other breweries, so the 30,000-square-foot Alameda production space and taproom was a big step up. The beer menu includes lots of barrel-aged beers, sours, and farmhouse ales — many of which are made using malt from the brewery’s next-door neighbor, Admiral Maltings.

Richmond
Armistice Brewing, 845 Marina Bay Parkway, Ste. 1
Armistice Brewing arrived in Richmond in summer 2017. The brewery is a result of a truce between brother-and-sister owners Gregory and Alex Zobel, who set aside their differences upon learning their mother was diagnosed with breast cancer and reconnected over home brewing together. Armstice’s website says they “rarely brew the same beer twice,” but the menu tends to feature a number of IPAs, plus brews made with lactose or fruit. You can also drink for a good cause here; for every pint of certain beers sold through the Ally Tap program, the brewery will donate $1 to causes like the Prison University Project.