Fruit Foraging? There’s an App for That

Foragers and the open-source community have a lot in common — they’re both interested in the free exchange of something valuable, whether it’s oranges or computer code. So it seems natural that Forage City, an application that facilitates the giveaway of free food, is open-source, so it, too, can be shared.

The app allows anyone to create his or her own Forage City website, on which users with excess food post what they have to share. Those in search of food can log in and find what’s available in their area. Once they find something they like, they can claim it online and pick it up in person. 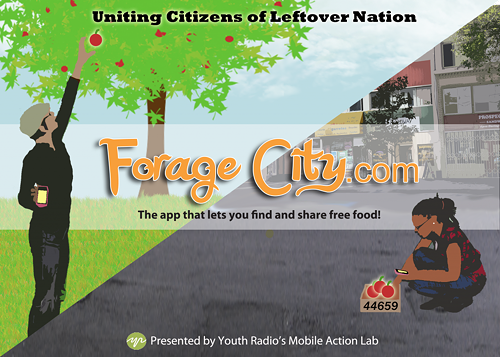 Forage City is itself claimable — because it’s open-source, the software is free and modifiable, so that anyone, or any organization, can run his or her own free food distribution network. “We want to share the goodness in the fullest sense by inviting people to hack into the code, and be a part of the sharing economy that is growing around the country,” said Elisabeth Soep, co-founder of the Mobile Action Lab, where the app was created.

The Mobile Action Lab, part of Oakland’s Youth Radio, gives Oakland youth the chance to invent mobile applications. In this case, the idea came from Forage Oakland founder Asiya Wadud, who for several years had been coordinating the harvest and free distribution of neighborhood tree fruit. The two organizations began collaborating, and over the course of two years, Oakland teens worked on the look and feel of the application with professional software developers and designers.

Initially, the application focused on tree fruit, but the concept evolved. Now, all kinds of food can be exchanged: backyard-grown kale, farmers’ market excesses, or bread from a bakery. At the Code for Oakland hackathon last year, the idea of making the whole platform shareable was born.

The code was released a few months ago and can be found at ForageCity.com. So far, no one has launched a Forage City site. According to the Mobile Action Lab’s co-founder, Asha Richardson, the lab is looking to partner with food-justice organizations and wants to support them with the launch of a Forage City community. Hopefully, it’ll happen soon.