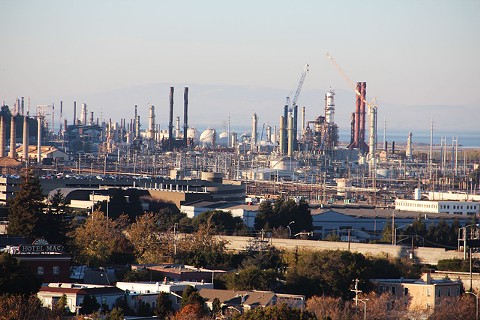 1. The California oil industry spent millions of dollars on lobbying during its successful effort this summer to weaken the state’s cap-and-trade program. Patrick McGreevy of the LA Times$ reports that the two biggest lobbying spenders from July 1 to Sept. 30 in Sacramento were the Western States Petroleum Association, a fossil fuel industry group, which spent $2.2 million, and Chevron, which spent $1.1 million. Big Oil had originally opposed the state’s plan to extend cap-and-trade, but after its lobbying effort watered it down, it decided to endorse the legislation.

2. During her state of the city speech last night, Oakland Mayor Libby Schaaf called on city homeowners to open their homes for homeless people and others who can’t find housing, reports Kimberly Veklerov of the San Francisco Chronicle. “Give up that Airbnb. Fix up that back unit,” Schaaf said, encouraging property owners to lease apartments at affordable rates. Oakland city employee union SEIU Local 1021 picketed Schaaf’s speech after holding a half-day strike. The union is locked in negotiations with the city over a new contract.

3. Oakland Councilmember Rebecca Kaplan is proposing to increase the amount that landlords must pay to evict tenants, reports Ali Tadayon of the East Bay Times$. Under Kaplan’s proposal, landlords would “pay $9,875 to those evicted from three or more bedroom units, $8,000 to renters evicted from two-bedroom units, and $6,500 to people evicted from studios or one-bedroom units. Households with low-income, elderly, or disabled people or those with minor children would be entitled to an additional payment of $2,500 per unit.”

4. The billionaire owner of the news website SFist abruptly shuttered the site on Thursday, along with Gothamist in New York City, the hyperlocal news site DNAinfo, and other online journalism properties around the country, the Chicago Tribune reports. The move by Joe Ricketts, who owns the Chicago Cubs and is a major donor President Trump, came after the journalists at Gothamist and DNAinfo voted to unionize.

5. And Donna Brazile, a former interim chair of the Democratic National Committee, says in her new book that Hillary Clinton had complete control of the Democratic Party months before she won the 2016 nomination. The DNC, which had a huge debt in 2015, handed over control to Clinton in exchange for bailing it out.