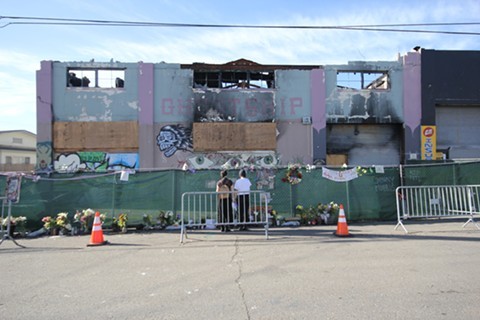 1. The San Francisco Chronicle snagged an interview with Max Harris, the Ghost Ship defendant who was acquitted last year of 36 counts of involuntary manslaughter. Spoiler alert: the high cost of housing in the Bay Area forced him to move to Portland. $$

2. Hayward became the seventh city in Alameda County to accelerate its minimum wage to $15 an hour, the East Bay Citizen reports. Workers in Hayward will receive a $2 bump in pay, starting on July 1.

3. Lafayette Councilmember Cameron Burks still wants an ethic investigation of state Sen. Nancy Skinner and a letter she sent last December to the city, the East Bay Times reports. Burks took umbrage about the letter suggesting the city violated the law involving a large housing project in Lafayette. The council last month decided not to follow Burks call for an investigation. $$

4. The first scores from California's new science test show that 28 percent of eighth-graders met or surpassed the minimum standards for the test, EdSource reports. African American and Latino students fared even worse.

5. East Bay Rep. Eric Swalwell is now an author. He's releasing a book that offers an inside look into the Trump impeachment proceedings, The Hill reports. "Endgame: Inside the Impeachment of Donald J. Trump" is set to be released on April 7.

6. A truck at the Port of Oakland caught fire Thursday morning, ABC7 reports. The truck was reportedly carrying walnuts. There were no injuries.