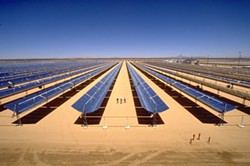 1. PG&E is seeking to penalize residents of cities that opt to create or join clean energy consortiums, the Chron$ reports. Critics contend that PG&E’s request to penalize residents is yet another attempt by the utility to maintain its monopoly over energy distribution and to dissuade cities from going green. The penalties, which still must be approved by state regulators, would force Marin Clean Energy’s customers, for example, including residents of Richmond, to pay $30.6 million. PG&E maintains that it needs to institute the penalties in order to remain viable.

2. The sea lion population off the California coast is still in bad shape — likely because of unusually warm ocean temperatures that are impacting the animals’ food supply, the Chron reports. Numerous emaciated California sea lion pups have been stranded on beaches, and the pups weighed 31 percent below their normal weight this fall — the lowest average in more than four decades.

3. A longstanding agreement to remove four dams on the Klamath River in order to free up more water for salmon is in jeopardy because of Republican intransigence in Congress, the LA Times$ reports.

6. And Uber took a potentially significant hit this week when a judge expanded the class of drivers who could be considered employees of the company rather than independent contractors, the Chron$ reports. Federal Judge Edward Chen also ruled that drivers may be entitled to the IRS mileage reimbursement of 57 cents a mile.