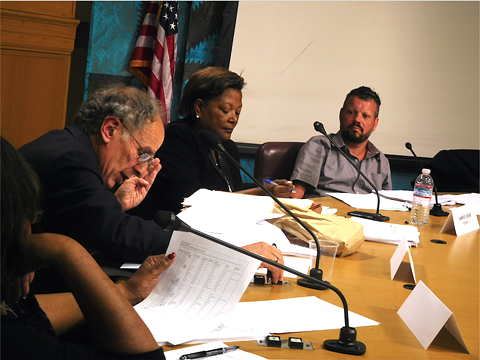 Barring reversal by the city council, Oakland now has the first seven members of its new police commission. They will be able to investigate and discipline police officers for misconduct, fire the police chief, and help set policies for the department.

Last night, members of a special selection panel picked a slate of four individuals, plus one alternate, to serve on the commission. The four new commissioners will join three other commissioners already selected by Mayor Libby Schaaf.

The city council still has to accept the panel's picks, but the council can only reject them as a slate. The council must also approve Mayor Schaaf's picks but can individually reject them.

The selection panel winnowed its selections down from a list of more than 140 applicants to just 28 finalists who were interviewed last week. At Monday night's meeting, the panel further refined the list to just eight individuals.

But one of them required no debate and was unanimously voted in: Jose Dorado.

Dorado is a long-time city resident and community leader who lives in City Council District 6 and has a business in the Fruitvale.

To pick the remaining three full commissioners and one alternate, the panel grappled with questions of race, gender, youth, and representation.

Panelist Tal Klement advocated strongly for Mike Nisperos because of his legal background and history in helping to strengthen the Oakland Citizens Police Review Board in the mid-1990s. Klement said Nisperos will be “able to cut through the crap and see things for what they really are,” and help his fellow commissions understand complicated legal issues.

Panelists Candice Jesse, Jim Chanin, and Mary Vail agreed and strongly recommended a spot for Nisperos, even though he only received four votes initially, ranking him seventh overall.

Panelist Jone Jones advocated for younger people having a seat on the board. Sarah Chavez Yoell echoed Jones, saying it is important to appoint young people or someone who works directly with youth to the commission.

Jones also said he would pick Leigh Davenport, but he felt she was removed from the list of finalist because of her affiliation with the Anti-Police Terror Project, a group that has organized protests against OPD and even took a stand against the police commission because some in the group felt it wasn't strong enough.

“It's easy to marginalize based on perceived associations,” said Jones about Davenport. But he said there is a difference between hating the police and hating police brutality.

“She was the most impressive,” said panelist Arnold Perkins. However, panelist Sarah Chavez-Yoell raised concerns that Harris lives in the same district as several of the mayor's picks, calling into question geographic diversity of those of the board. But Perkins said it was more important to him to have a strong commission than balance out the spots on the board by city council district, a position to which Chanin and Jesse agreed by nodding their heads.

Jean Blackshear said she was concerned about having no resident from District Seven on the commission.

When the panelists finally voted, it was Ahmad Mubarak, Ginale Harris, Mike Nisperos, who made the cut. After some debate about whether the commission would be balanced enough in terms of gender, the panel chose to make Maureen Benson the alternate, meaning that she won't be a full commissioner, but instead will serve when a commissioner is absent, or if a full commissioner steps down or is removed.

Who's on the commission?

Jose Dorado (picked by the panel) is a Latino who was born and raised in Oakland's Fruitvale District. He runs a tax and bookkeeping business. Since 1996, he has led the Maxwell Park Neighborhood council, one of Oakland's neighborhood crime prevention councils that works closely with OPD to address public safety problems. Dorado was appointed by Mayor Jean Quan to the Measure Y oversight committee and has served in numerous other civic roles.

Ginale Harris (picked by the panel) is a mixed-race Black, Latino, and white woman who lives in deep East Oakland. She currently works as a San Francisco deputy court clerk. She has worked for years as a probation and parole advocate helping formerly incarcerated people navigate the justice system. She served on SFPD Chief Greg Suhr's violence prevention committee in 2012.

Mubarak Ahmad (picked by the panel) is a 28-year Black Oakland resident with six children and six grandchildren. He coaches little league baseball and is a basketball coach for Montera Middle School. He works for AC Transit.

Mike Nisperos (picked by the panel) is a Filipino-American who was raised in Oakland. He has worked as an Alameda County prosecutor, an Air Force JAG officers, a criminal defense attorney, an associate in the John Burris law firm where he focused on police misconduct cases, as a public safety analyst, and he authored the Oakland Mayor's 2001 Public Safety Plan which called for a transition toward community policing tactics. In 1997, he helped revamp the Citizens Police Review Board after the council expanded its jurisdiction and authority. He has been arrested by OPD four times.

Maureen Benson (picked as an alternate by the panel) is a white, 17-year Oakland resident. She previously worked as an OUSD teacher and principal.

Thomas Smith (picked by Schaaf) is a Black Oakland resident who serves as the political action chair of the Oakland NAACP. He previously worked as a management consultant for McKinsey and Company. He helped establish the Helen Y. Davis Leadership Academy charter school in Massachusetts and was on the board of directors for the Conservatory of Vocal Arts charter school in Oakland.

Regina Jackson (picked by Schaaf) is a Black woman who serves as the president and CEO of the East Oakland Youth Development Center and has served on several Oakland youth and education task forces.

Andrea Dooley (picked as an alternate by Schaaf) is a white attorney and an arbitrator who previously worked at Kaiser Permanente. She advises unions and employers on employment laws.

Correction: the original version of this story misquoted Tal Klement as saying an attorney on the police commission would reduce the commission's reliance on outside counsel and the Oakland city attorney. He did not say this.