Environmentalists say the stadium could cause a die-off of birds and force them to leave the area completely. 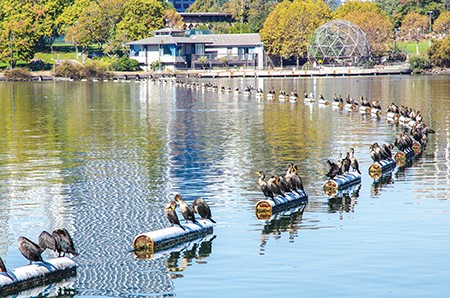 Of all the opponents lining up against the A’s’ plans to build a new ballpark next to Laney College, the most formidable might turn out to be an environmental group dedicated to protecting birds: the Audubon Society.

Cindy Margulis, executive director of the Audubon’s Golden Gate chapter, said in an interview that a new ballpark built near the Lake Merritt Channel would devastate large numbers of bird species that nest each year at Lake Merritt, especially herons and cormorants.

The ballpark could cause a die off of birds and perhaps force them to leave the Lake Merritt area completely. And Margulis says she sees no way for the A’s to prevent what she predicts will be an ecological catastrophe.

“Lake Merritt is the oldest state-funded wildlife refuge in the nation,” Margulis said. “That’s really special, and that’s why we have so much wildlife there. … And it’s very unusual to have this much wildlife in the middle of a large city. Oakland is a very, very special place.”

Margulis explained that Lake Merritt hosts thousands of birds each year during the spring and summer nesting season — which coincides with the baseball season. The night heron colony alone in the area usually includes about 150 nests, which translates to about 300 parent birds. And each nest typically has about three chicks, which translates into 450 baby herons in the colony each year.

And Oaklanders are sure to be up in arms about any project that could harm night herons, given that they’re the unofficial bird of The Town. “Oakland also was the second city in the nation to officially become a bird-friendly city,” Margulis noted.

Because there isn’t enough food in Lake Merritt for all the baby chicks in the area, bird parents travel each day to the Oakland-Alameda estuary, Margulis explained. The birds typically either swim in or fly low along the Lake Merritt Channel, which connects the lake with the estuary. Parent birds often take this route eight to 10 times daily, and they usually fly underneath the I-880 overpass to retrieve nutrients for their young.

If the A’s build a new ballpark on East 8th Street, the parent birds will fly right past the new 35,000-seat stadium. Bright lights will interfere with the birds’ evening food trips, but loud noises will impact them the most. Every time there’s a roar of the crowd — from a homerun or a great defensive play — the parent birds will likely scatter. Some of the frightened birds will fly onto the freeway, smashing into cars and trucks, Margulis said. “The impacts are potentially catastrophic.”

Margulis said Audubon has been trying to talk the A’s out of considering a new ballpark near Lake Merritt — which is a key stop on the Pacific Flyway — for seven years, but to no avail. She said her group is not opposed to new housing or other development, but a sports stadium, because of the loud noises and bright lighting, presents special problems for birds that currently have no solution.

Environmentalists are also concerned about fans dropping trash into the estuary as they walk to and from the stadium and that wind-blown plastics will end up in the water.

The A’s, undoubtedly, will have to thoroughly analyze the impacts on birds when the team conducts its environmental impact report. And team President Dave Kaval has said the A’s will protect the environment.

Oakland Assistant City Administrator Claudia Cappio said it’s possible that if the Audubon Society is correct, then the A’s will ultimately have to conclude in the EIR that impacts to Lake Merritt bird populations are “significant and unavoidable.” That doesn’t mean the team will have to abandon its ballpark proposal, but it will make the project harder to complete.

And bird lovers will likely become one of the A’s’ toughest off-field opponents. 